Biography compiled by the staff of the Naval History and Heritage Command. 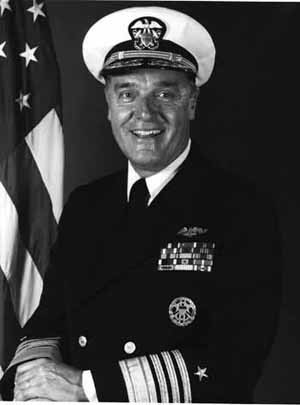 Admiral James D. Watkins led a Navy that developed a Maritime Strategy for dealing with the USSR and he deployed naval forces that managed crises worldwide. He improved the quality of life and service for Sailors.

In the course of his thirty-seven-year naval career, he served on both surface ships and submarines and became an experienced submarine officer. Admiral Watkins commanded the US Sixth Fleet and later the US Pacific Fleet. He also served as Chief of Naval Personnel and Vice Chief of Naval Operations. As Chief of Naval Operations, he left an indelible mark on the Navy through the breadth of his thinking and his interest in the individual Sailor. During his tenure, naval forces operated in support of national objectives in Grenada, Lebanon, and the Persian Gulf. Appreciating that changes were occurring in the Soviet Union at the end of the Cold War, he initiated a review of American naval strategy. He precipitated a renaissance in naval operational thought that encouraged a new generation of officers to become more deeply involved. This effort addressed an era he described as one of “violent peace” with a new American, forward-thinking and forward-deployed Maritime Strategy. At home he sought to improve the lot of the individual Sailor with support for families, a call to excellence, and practical measures to increase their compensations.

Source: Biography compiled by the staff of the Naval History and Heritage Command.

James David Watkins was born in Alhambra, California, on 7 March 1927, son of Edward Francis and Louise W. (Ward) Watkins. He attended the University of California at Berkeley (1944-1945), prior to entering the US Naval Academy, Annapolis, Maryland, on appointment from his native state in 1945. Graduated and commissioned Ensign on 3 June 1949, he subsequently advanced in rank to that of Captain, to date from 1 August 1968. His selection for the rank of Rear Admiral was approved by the President on 27 April 1971.

Following graduation from the Naval Academy in 1949, he joined the USS Fechteler (DD-870) and while on board that destroyer participated in two cruises to the Western Pacific. Detached from the Fechteler in December 1950, he next had submarine training at the Submarine School, New London, Connecticut. In July 1951 he reported on board the USS Volador (SS-490) and was attached to her during one war patrol in Korean area hostilities. He became Engineer Officer on the Staff of Commander Submarine Division FIFTY-TWO in November 1953. From July 1955 to February 1958 he had instruction in mechanical engineering (nuclear power) at the Naval Postgraduate School, Monterey, California, from which he received the degree of Master of Science, (his thesis, Analog Computer Simulation on Low Power Reactor Operations, was submitted and accepted). He next had further instruction at the Oak Ridge, Tennessee School of Reactor Technology.

In September 1958 he joined the USS Barbero (SSG-317) as Executive Officer and Navigator and during the period April to September 1960, was a student in the Nuclear Power Program at the Nuclear Power Training Unit, West Milton Site, Schnectady, New York. There he qualified as EOOW on the S3G (Triton) land-based reactor prototype. He attended the 85W Reactor Course at the Bettis Atomic Power Laboratory, Pittsburgh, Pennsylvania. He reported on October 1960 for precommissioning duty in the USS Snook (SSN-592), building at the Ingalls Shipbuilding Corporation, Pascagoula, Mississippi, and served as Executive Officer and Navigator of that nuclear power submarine from her commissioning, 4 November 1961 until March 1962. Assigned next to the Bureau of Ships, Navy Department, Washington, DC, he had duty as Assistant to the Manager for Naval Reactors for Training and Personnel Matters connected with the Nuclear Power Program.

He rejoined the Snook in October 1964, this time as Commanding Officer and as such participated in two cruises to the Western Pacific. The Snook, under his command, was the first nuclear powered submarine to visit the Republic of Korea (25 June 1965) and Yokosuka, Japan ( 30 May 1966). He was awarded the Legion of Merit and the Navy Commendation Medal. The citations follow in part:

Legion of Merit: "For exceptionally meritorious service during the spring of 1965...Exercising outstanding professional skill, technical competence and dedicated leadership in proving the operational value of a unique equipment system, Commander Watkins contributed greatly to the successful accomplishment of a mission of great value to the Government of the United States..."

Navy Commendation Medal: "For meritorious service during the summer of 1965...Commander Watkins consistently demonstrated outstanding professional competence and sound leadership while conducting extended submarine operations. As a direct result of his thorough preparations, determined efforts and exceptional skill, USS Snook successfully accomplished a mission of great value to the Government of the United States..."

He was also entitled to the Ribbon for and facsimile of the Navy Unit Commendation awarded the Snook.

In April 1967 he reported as Executive Officer of the USS Long Beach (CGN-9), which had two Western Pacific deployments. During the 1968 deployment to the Gulf of Tonkin, while supporting Task Force SEVENTY-TWO operations, that nuclear powered guided missile cruiser participated in events leading to the shoot-down of five North Vietnamese MIG aircraft, two by long range surface-to-air missiles (first in US Naval History) and three by air intercept with her air controllers. He was awarded the Bronze Star Medal with Combat 'V,' meritorious service as Executive Officer of the USS Long Beach during the summer of 1968. He was also entitled to the Ribbon for and facsimiles of the Navy Unit Commendation (Bronze Star in lieu of second award) and the Meritorious Unit Commendation awarded the Long Beach.

Assigned in July 1969 to the Bureau of Naval Personnel, Navy Department, he served as Program Manager for Nuclear Power and Head of the Submarine/Nuclear Power Distribution Control Branch. He was awarded a Gold Star in lieu of the Second Legion of Merit and cited in part as follows: "...During one of the most crucial periods for manpower planning in the history of the US Navy, Captain Watkins, as principal advisor to the Chief of Naval Personnel for Nuclear Personnel, has been responsible for direct supervision of the recruiting, training, and efficient assignment of all submarine officers, and for planning and policy matters involving enlisted submariners..." In September 1971 he became Director of the Enlisted Personnel Division, Bureau of Naval Personnel (his title was changed in July 1972 to Assistant Chief of Naval Personnel for Enlisted Personnel Control) and in June 1973 was ordered detached for duty as Commander Cruiser Destroyer Group ONE.

After retiring from the Navy he led a very active life. In 1987 he chaired President Reagan's Commission on the HIV Epidemic. Known as "The Watkins Commission," it investigated the AIDS epidemic and eventually recommended support for increased AIDS research, laws protecting HIV-positive people, and treatment of drug addiction.

On 9 March 1989, Watkins was sworn in as Secretary of Energy by President George Bush. As Energy Secretary, he developed a ten-point plan to strengthen environmental protection and waste management activities at the Department of Energy, established the Office of Environmental Restoration and Waste Management, and, recognizing American dependence on foreign oil, instituted policy designed to increase oil production and decrease consumption to counter Iraqi-Kuwaiti oil losses caused by the Iraqi Invasion of Kuwait. He remained in his position as Energy Secretary until 1993.

The US Commission on Ocean Policy became the second presidential commission chaired by Watkins. Established by The Oceans Act of 2000 on 20 January 2001, the commission was charged with developing a comprehensive national ocean policy including governance, research, education, marine operations, stewardship, and investment. It conducted hearings and research before producing its final report, An Ocean Blueprint for the 21st Century on 20 September 2004.

Admiral James Watkins, the Chief of Naval Operations during the Reagan administration, died 26 July 2012. Watkins is survived by his wife Janet and his six children.