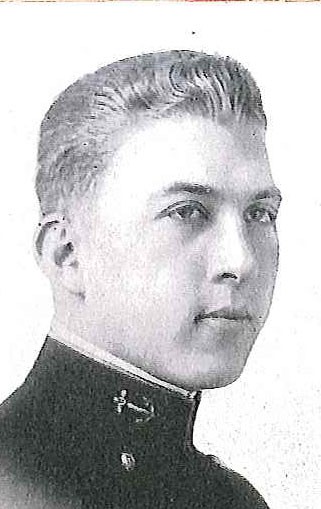 Admiral Denebrink attended public schools in Sheridan, Wyoming, and Long Beach, California, and was graduated from the Naval Academy in 1917. He completed the Naval War College course in 1932.

Commissioned Ensign upon graduation from the Naval Academy, he advanced through the grades to the rank of Rear Admiral in April 1944 and to Vice Admiral in December 1952.

He served for fourteen years in destroyer types, beginning with the Warrington, based at Queenstown, Ireland, and Brest, France during World War I, and ending with command of the McCormick in Chinese waters in 1930. Alternating with duty afloat during that period, he served as Aide to the Superintendent of the Naval Academy in 1922-1923, and in 1926-1928 was Officer in Charge of the Press Section, Navy Department, and Naval Aide at the White House.

Sea duty for fur years on the Staffs of Scouting Force, Battle Force, and US Fleet, was followed by a shore tour (1936-1939) as Head of the Department of Navigation, at the Naval Academy. He was Executive Officer of the light cruiser Brooklyn for two years, after which he served briefly in the Office of Strategic Services and as Aide to the Chief of Naval Operations. He commanded the Brooklyn in 1942-1943, during World War II operations off Casablanca, Morocco, and in the rescue of 1500 survivors of the burning transport, USS Wakefield.

In 1943-1944 he served as Chief of Staff to Commander, Fleet Operational Training Command, Atlantic Fleet, and with his promotion to Rear Admiral in April 1944 became Commander Fleet Operational Training Command, Pacific Fleet. Before the war’s end, he commanded Cruiser Division FIVE in the Aleutians, and later served as Commander Naval Forces engaged in the occupation of northern Japan. He subsequently commanded Service Squadrons TEN and THREE in the Orient.

Admiral Denebrink commanded a Naval Task Group at Eniwetok for atomic tests in Operation Sandstone, in 1945-1947, and for a year thereafter was Navy Director, Military Council, Munitions Board, in Washington, DC.

From December 1949 to December 1952 he commanded Service Force Pacific Fleet, and on December 20, 1952, with his promotion to Vice Admiral, he assumed the duties of Commander, Military Sea Transportation Service. On July 1, 1956 he was transferred to the Retired List of the US Navy.