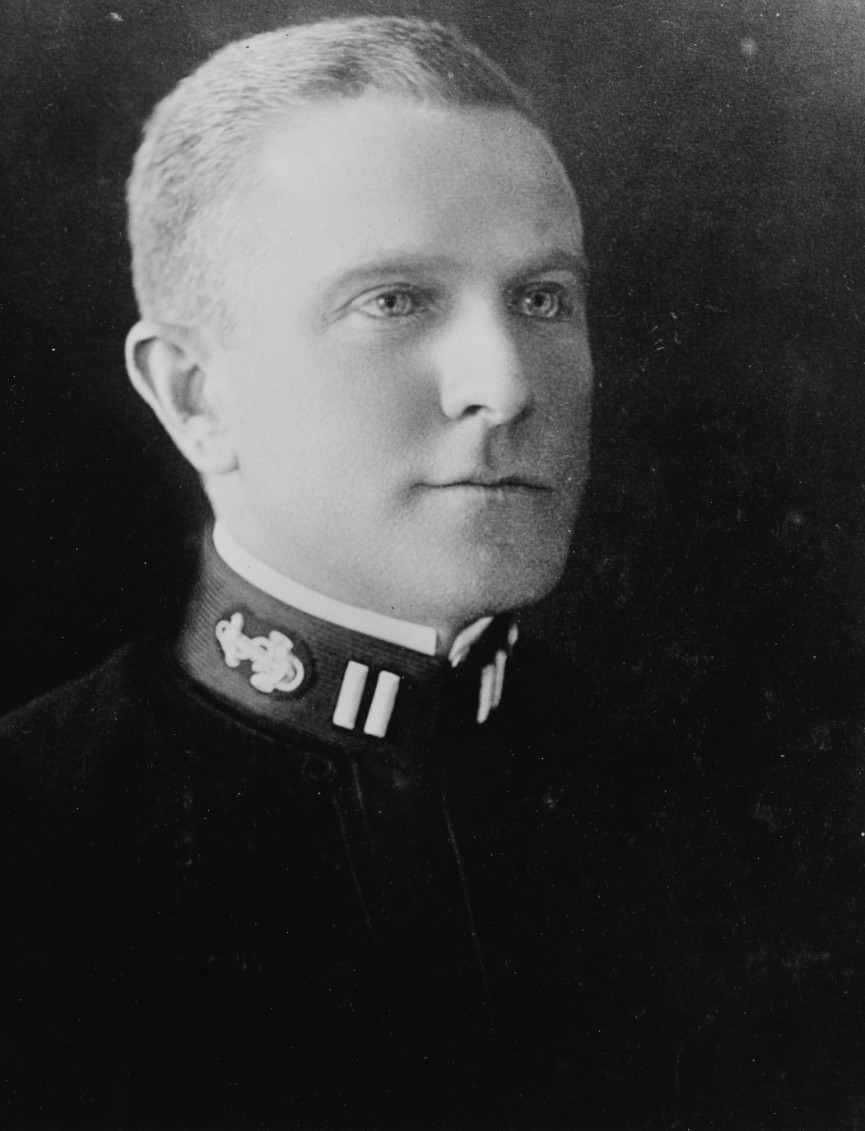 David Worth Bagley was born on 8 January 1883, in Raleigh, North Carolina. He attended North Carolina State College at Raleigh during 1898 and 1899, and the following year received his appointment to the US Naval Academy, Annapolis, Maryland, from his native state. Graduated on 1 February 1904, he served the two years at sea, then required by law, before he was commissioned Ensign on 2 February 1906. Receiving periodic promotions, he attained the rank of Vice Admiral to date from 1 February 1944 and on 1 April 1947, was transferred to the Retired List of the US Navy and advanced to the grade of Admiral on the basis of combat awards.

Following graduation from the Naval Academy in 1904, he joined the USS Missouri, operating with Battleship Squadron, North Atlantic Fleet. Detached from that vessel in December 1905, he had consecutive duty until March 1907 in the USS Concord and the USS West Virginia, both units of the Asiatic Fleet. In June 1907, he was assigned to the USS Rhode Island, attached to the Atlantic Fleet, and while aboard that vessel made the trip around the world with the Battle Fleet, [Great White Fleet] December 1907 to February 1909.

Detached from the Rhode Island in April 1909, he had a year's special instruction at the General Electric Company, Schenectady, New York, and at the Navy Department, Washington, DC, prior to reporting in April 1910, as Aide and Flag Lieutenant on the staff of Commander Second Division, US Atlantic Fleet. Transferred to the staff of the Commander in Chief, US Asiatic Fleet, he served in that assignment until July 1912 and in September of that year was assigned to the Academic Staff at the Naval Academy.

He remained at the Naval Academy until September 1914, after which he joined the USS Michigan. He served as First Lieutenant aboard that battleship, a unit of the Atlantic Fleet, until October 1915, when he assumed command of the USS Jacob Jones. He was in that assignment upon the entry of the United States in to World War I, 6 April 1917, and was aboard that destroyer when she was sunk by an enemy submarine between Brest, France and Queenstown, Ireland. "For distinguished service...as Commanding Officer of the USS Jacob Jones upon the occasion of the sinking of that vessel by an enemy submarine on December 6, 1917..."he was awarded the Distinguished Service Medal. The citation continues: "The conduct and bearing of Commander Bagley under the trying conditions of the disaster and his handling of the situation were in accord with the best traditions of the Naval Service."

Following the sinking of the Jacob Jones, he returned to the United States for fitting out duty in the USS Lea, building at the Navy Yard, Philadelphia, Pennsylvania, and upon her commissioning on 2 October 1918, he assumed command. Relieved of that duty in January 1919, he reported as Port Officer at Rotterdam, The Netherlands, with additional duty as Assistant to the Naval Attaché at the American Legation, The Hague, and seven months later became the Naval Attaché there. From December 1912 until November 1922, he was assigned to the Office of Naval Intelligence, Navy Department, Washington, DC, after which he returned to sea in command of the USS Reno and Destroyer Division THIRTY TWO, Pacific Fleet. In August 1923 he transferred to command of Division THIRTY FIVE, Destroyer Squadrons, Battle Fleet, and served in that capacity until May 1924.

He was attached to the Executive Department at the Naval Academy during the academic years 1924-1925 and 1925-1926, followed by duty as Chief of Staff to the Commander, Naval Forces, Europe, USS Memphis, flagship. While in that assignment he visited ports in Spain, England, Norway, Denmark, Sweden, Germany, and France, and had temporary additional duty in Rome, Italy, in April 1927. Relieved of staff duty in September 1928, he was assigned the following month to the Ninth Naval District, Great Lakes, Illinois. On 11 April 1929, he became Assistant to the Commandant (title changed to Chief of Staff on 7 August 1930), of that District, with temporary additional duty as Acting Commanding Officer of the Naval Training Station there.

In December 1931 he assumed command of the USS Pensacola, a unit of Cruiser Division FOUR, Scouting Fleet, and in May 1933 returned to the United States for duty in the Bureau of Navigation, Navy Department, Washington, DC. In April 1935 he became Assistant Chief of that Bureau, and continued to serve as such until May 1935. He had instruction at the Naval War College, Newport, Rhode Island, and upon completing the Senior Course, remained there for duty on the staff until June 1936. Service as Commander Destroyer Squadron TWENTY, Destroyers, Scouting Force, proceeded as assignment from July 1937 to May 1938 as Commander Minecraft, Battleforce.

Between May 1938 and January 1941 he served as Commandant of the Navy Yard, Mare Island, California, after which he reported as Commander Battleship Division TWO. Relieved of that command in March 1942, he became Commandant Fourteenth Naval District and Commander Hawaiian Sea Frontier, with headquarters at Pearl Harbor, Territory of Hawaii. Transferred to the Eleventh Naval District, San Diego, California, he served as Commandant of that District until January 1944 with further duties as Commander Naval Operating Base there, and Commander Surface Task Force, Southern Sector, Western Sea Frontier.

He was in command of the Western Sea Frontier until November 1944, when he again reported as Commander Fourteenth Naval District and Commander Hawaiian Sea Frontier. "For exceptionally meritorious conduct...in this assignment from November 1944 until July 1945 he was awarded the Legion of Merit. The citation follows in part:

"Responsible for the overall administration and supervision of the numerous and varied Naval shore establishments as well as certain offshore functions in the Hawaiian and other outlying islands where Naval installations were situated...(he) by his efficient cooperation with other branches of the armed services as well as by his administration of directives and policies in the execution of his authority in civilian affairs...contributed materially to the effective employment of this vast area in the successful prosecution of the war against Japan..."

On 20 August 1945, he reported to the Office of the Chief of Naval Operations, Navy Department, where he served as a member of the International Defense Board; the United States-Mexican Defense Commission; and the Permanent Joint Board on Defense, United States-Canada. Relieved of all active duty on 22 March 1946, he was transferred to the Retired List of the US Navy on 1 April 1947.

In addition to the Distinguished Service Medal and the Legion of Merit, Admiral Bagley has the World War I Victory Medal, Destroyer Clasp; the American Defense Service Medal, Fleet Clasp; the American Campaign Medal; the Asiatic-Pacific Campaign Medal; and the World War II Victory Medal. He has also been awarded the Cruz del Mérito Naval Blanco de 2a Clase by the King of Spain, the Order of Avis by the Portuguese Government and Commander of the Order of the Savior by the Government of Greece.

Admiral Bagley's brother, the late Ensign Worth Bagley, USN, was the first American killed in the Spanish-American War in 1898.

Admiral Bagley died 24 May 1960 at the Naval Hospital in San Diego, California.