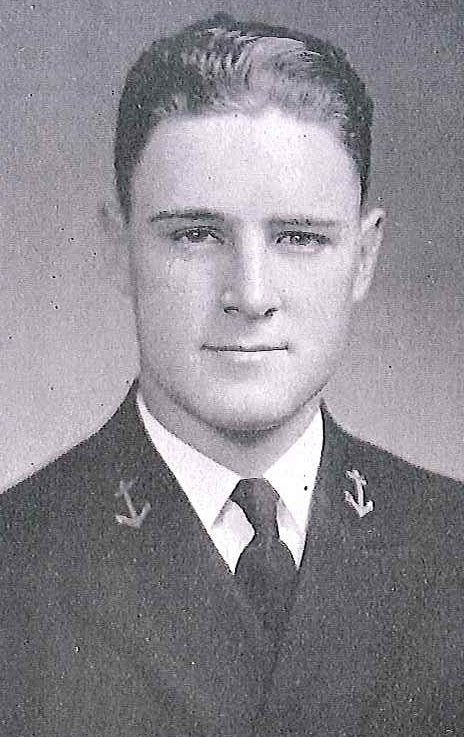 James Alexander Bentley was born in Maywood, Illinois, on August 17, 1912, son of the late Walter H. and May Elizabeth (Falls) Bentley. He was graduated from Lane Tech High School in Chicago, and attended the University of Chicago and Purdue University prior to his appointment to the US Naval Academy, Annapolis, Maryland, which he entered on June 16, 1931. As a Midshipman he participated in athletics (football and crew, and was Class President. He was graduated with the degree of Bachelor of Science and commissioned Ensign in the US Navy, from June 6, 1935. Through his transfer to the Civil Engineer Corps from the Line of Navy and subsequent advancement, he attained the rank of Captain, CEC, USN, to date from May 1, 1954.

After graduation from the Naval Academy, he served as a Line Officer on board USS New Orleans in 1935, and in USS Quincy from October of that year until April 1937, during which period that cruiser was assigned to the Mediterranean from July to September 1936 in connection with taking refugees from the Spanish War. Upon his return to the United States he attended the Chemical Warfare School, Edgewood Arsenal, Maryland, for a month, then entered Rensselear Polytechnic Institute, Troy, New York, from which he received the degree of Bachelor of Civil Engineering in 1939 and Master of Civil Engineering in 1940.

His first duty as a Civil Engineer was in the Public Works Department of the Naval Air Station, Jacksonville, Florida, where he was stationed at the outbreak of World War II in December 1941. He remained there until October 1942, after which, until May 1944, he was an instructor at the Construction Battalion Center, Camp Poary, Virginia. During the next seven months he served as a Construction Battalion Inspector for the Bureau of Yards and Docks, Navy Department, Washington, DC, and from December 1944, throughout the remaining period of hostilities, and until July 1946, served as CB Personnel and Operations Officer on the Staff of Commander Service Force, US Pacific Fleet.

After four months’ service in the Public Works Department of the Naval Shipyard, Pearl Harbor, TH, he served as an Instructor in Logistics at the Armed Forces Staff College, Norfolk, Virginia, during the first year after the school was established. In July 1948 he reported to the Submarine Base, New London Connecticut, and served as Public Works Officer, with additional duty as Recreation and Welfare Officer, until February 1951. Duty as Public Works Officer of the Long Beach Naval Shipyard, Long Beach, California, from February 1951 to May 1953, was followed by his assignment as District Public Works Officer, Seventeenth Naval District, Kodiak, Alaska, with additional duty as District Civil Engineer.

On December 8, 1954, he was ordered detached from Headquarters, Seventeenth Naval District, and to the Boston Naval Shipyard, Boston, Massachusetts, as Public Works Officer. He is now under orders to report in August 1958 to the Potomac River Naval Command, Washington, DC, for similar duty.