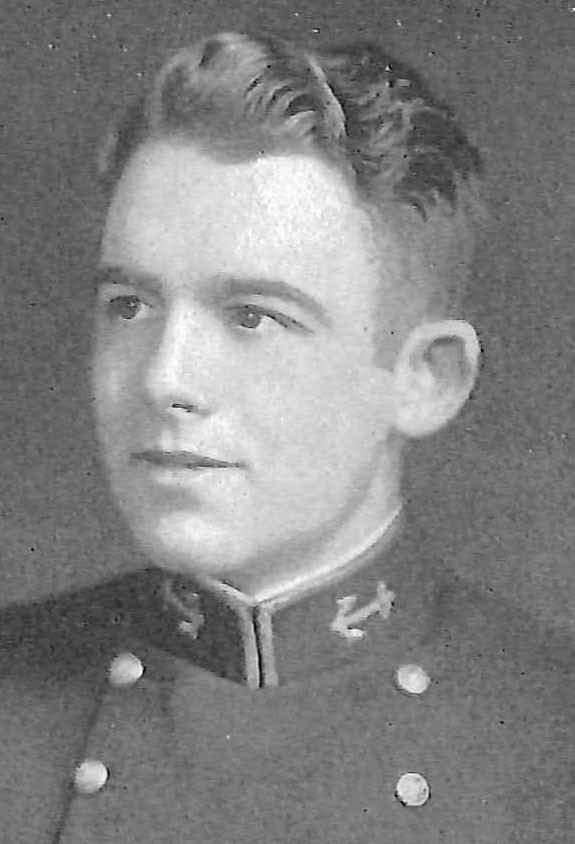 Robert Alexander Chandler was born in Mayesville, South Carolina, on December 14, 1912, son of Mrs. Jesse (Wallace) Chandler Hill and step-son of Captain K.L. Hill, USN, Retired. He attended Western High School and Devitt Preparatory School, both in Washington, DC, prior to entering the US Naval Academy, Annapolis, Maryland, on appointment from his native state in 1930. Graduated and commissioned Ensign on May 31, 1934, he subsequently advanced in rank, attaining that of Captain, to date from July 1, 1953.

Following graduation from the Naval Academy in 1934, he joined USS Texas and in June 1935 reported on board USS Sands. In June 1938 he transferred to USS Sampson and from June 1939 until April 1941 continued duty afloat in the cruiser Salt Lake City. He next had instruction in aeronautical engineering at the Postgraduate School, Annapolis, Maryland.

In July 1942 he was assigned to USS Bogue for duty in connection with gunnery and aerology and in January 1943 reported as Aerology Officer on board USS Bunker Hill. In that capacity he saw action during the air attack on Rabaul; the Gilbert Islands (Tarawa) campaign; the attacks on the Marshall Islands and the raids on Kavieng and Kurile Island. He is entitle to the Ribbon for and a facsimile of the Presidential Unit Citation awarded the USS Bunker Hill. In February 1944 he joined the staff of Commander North Pacific Force for duty as Aerological and Operations Officer.

“For meritorious service as Aerological Officer on the staff of Commander North Pacific Force from February 1944 to February 1945…” he was awarded the Bronze Star Medal with Combat “V.” The citation further states in part: “Providing accurate forecasts and weather data, Commander Chandler rendered invaluable assistance to Commander North Pacific Force in the planning, support and execution of sustained operations against Japanese forces in the Kurile Islands…”

He was Officer in Charge of the Aerology Branch in the Bureau of Aeronautics, Navy Department, Washington, DC, from April 1945 until August 1947. In that capacity, he had change of the tests of a new type of weather balloon to seek accurate information in the stratosphere. The balloon, released at the Weather Bureau Experimental Station, College, Park, Maryland, reached an altitude of 93,000 feet at the ascensional rate of more than 1,200 feet a minute, which at that time was record. Transferred to the Officer of the Chief of Naval Operations, Navy Department, he had duty there in connection with aeronautical research and development and in August 1949 became Officer in Charge of the Fleet Weather Central, San Diego, California.

In March 1951 he joined the staff of the Commander Seventh Fleet as Fleet Aerologist and in that assignment participated in the hostilities in Korea. He was Operations Officer and Fleet Aerologist on the staff of Commander First Fleet between June and October 1952, after which he served as Executive Officer of the Fleet Weather Central, Pearl Harbor, Territory of Hawaii. In June 1953 he became Officer in Charge of that Weather Central.

He was a student at the Naval War College, Newport, Rhode Island, from July 1954 until July 1955, after which he remained for duty on the staff until July 1957. He then reported as Officer in Charge of Aerology Curricula at the Naval Postgraduate School, Monterey, California, and in July 1958 returned to the Fleet Weather Central, Pearl Harbor, to serve as Commanding Officer. In February 1959 he was ordered to duty as Fleet Aerologist in the staff of the commander in Chief, US Pacific Fleet, and on May 22, 1961, was transferred to the Bureau of Naval Weapons, Navy Department.