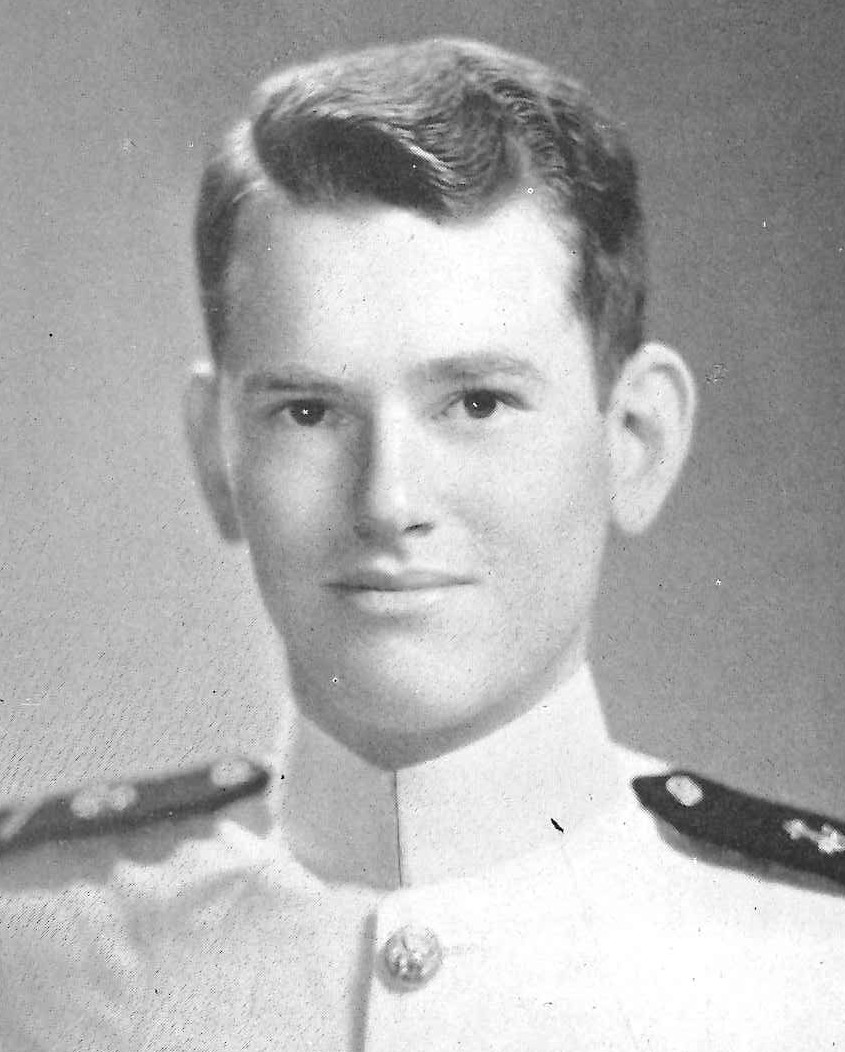 John Francis Barlow was born in Muskegon, Michigan, on February 21, 1923, son of Francis G., an Army Signal Corps aviator in World War II, and Teresa M. (Lynch) Barlow.  He attended Muskegon Junior College and the University of Michigan, at Ann Arbor, prior to entering the US Naval Academy, Annapolis, Maryland, on appointment from his native state in 1942.  Graduated with the Class of 1946 on June 6, 1945 (accelerated course due to World War II), he was commissioned Ensign and subsequently advanced in rank to that of Captain, to date from November 1, 1966.

Following graduation from the Naval Academy in 1945, he reported on board the USS Stevens (DD-478) and from December 1945 until September 1947 continued duty afloat in the USS Stribling (DD-867).  He next had flight training at the Naval Air Stations, Pensacola, Florida, and Corpus Christi, Texas.  Designated Naval Aviator on March 31, 1949, he served as Material Officer and Operations Test Pilot at the Naval Air Station, Johnsville, Pennsylvania, until April 1951, after which he was assigned as Air Intelligence Officer with Patrol Squadron FORTY-FIVE, based Coco Solo, Canal Zone.

He was Assistant Head of the Weapons and Fire Control Department and an Instructor at the Officer Candidate School, Newport, Rhode Island, between August 1953 and June 1956, then had duty as Special Weapons Training Officer with the Heavy Attack Training Unit, Sanford, Florida.  In July 1958 he reported for instruction at the Naval War College, Newport, Rhode Island, and after completing the Command and Staff Course in June 1959, joined Heavy Attack Squadron THREE as Basic Training Officer and A3D Flight Instructor.  Transferred in September 1961 to Heavy Attack Squadron ELEVEN, he was Maintenance Officer, Operation Officer and Executive Officer until April 1964.  Ordered to the USS Independence (CVA 62), he served as Assistant Air Officer, Aviation Safety Officer and Air Officer and as such participated in combat operations in the Southeast Asia area.  He was awarded the Navy Commendation Medal “for meritorious service while serving as Air Officer on board USS Independence from July 1 to October 1, 1965.  The citation further states in part:

“During this period INDEPENDENCE participated in combat operations against the enemy in Southeast Asia as a unit of Attack Carrier Striking Force, SEVENTH Fleet.  Commander Barlow’s performance of duty in this complex and professionally demanding environment showed unusual initiative, foresight and professional competence.  His expert integration of the first all-jet air wing and its new complex weapons systems into the operational routine of an aircraft carrier operating under combat conditions, greatly enhanced the operational capability of INDEPENDENCE…”

He is also entitled to the Ribbon for, and a facsimile of the Navy Unit Commendation awarded the INDEPENDENCE.