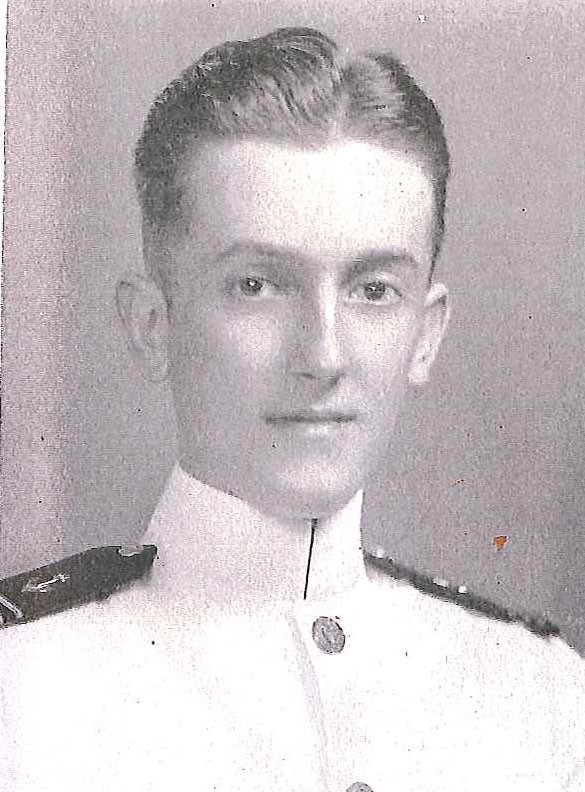 Winfred Emil Berg was born in Fredericksburg, Texas, on March 4, 1917, son of William J. and Ida (Kraus) Berg. He attended high schools in Morris Ranch and Fredericksburg, Texas, and the Agricultural and Mechanical College of Texas at College Station, prior to entering the US Naval Academy, Annapolis, Maryland, on appointment from his native state in 1935. Graduated and commissioned Ensign on June 1, 1939, he subsequently advanced in rank, attaining that of Captain, to date from January 1, 1958.

Following graduation from the Naval Academy in 1939, he joined USS Indianapolis and was attached to that cruiser when the United States entered World War II, December 8, 1941. He participated in operations at Bougainville and in the raid on Salamaua-Lae before he was detached from that vessel in July 1942. He next had preliminary flight at the Naval Reserve Aviation Base, New Orleans, Louisiana and from October 1942 until April 1943 continued training at the Naval Air Station, Pensacola, Florida.

Designated Naval Aviator, April 6, 1943, he had further training at the Naval Air Station, Sanford, Florida and during October and November of that year was assigned to the Naval Air Station, Beaufort, South Carolina. He served as Administrative and Executive Officer of Bombing Squadron ONE HUNDRED TWENTY NINE from November 1943 until May 1944 and after temporary duty with Air Force, US Pacific Fleet, reported in July 1944 as Air Operations Officer at the Naval Training Station, Newport, Rhode Island.

In October 1944 he joined USS Randolph as Air Operations Officer and in February 1945 was detached for duty with Air Transport Evacuation Squadron ONE. He is entitled to the Ribbon for, and a facsimile of the Navy Unit Commendation awarded that squadron. The citation follows in part:

“For outstanding heroism in support of military operations during the Okinawa Campaign from April 1 to June 21, 1945. Operating with new crews and, during the first phase of this period, without benefit of adequate logistic support or navigational aids, Air Transport Squadron ONE evacuated over 9,600 casualties despite extremely foul weather conditions. On return flights to the target, this gallant group carried over two million pounds of cargo, including 15,800 rounds of 81-mm. mortar shells urgently required by the TENTH Army, thereby making possible continued vital fire support for our infantry…(The squadron) continued its hazardous mission until all organized Japanese resistance had ceased and by the invaluable service thus rendered contributed immeasurably to the success of our forces in securing this strategically important base.”

He was Plane Commander of Air Transport Squadron ELEVEN between June and November 1945, when he joined the staff of Commander Naval Air Transport Service, Pacific Wing, as Operations Officer. He served briefly, December 1946-January 1947, with Air Transport Squadron EIGHT, prior to reporting as a student at the US Naval School (Electronics Engineering), Massachusetts Institute of Technology, Cambridge. On September 24, 1948 he received the degree of Bachelor of Science from MIT and was assigned to the Naval Research Laboratory, Washington, DC, where he had duty as Program and War Plans Officer until July 1952.

Assigned next to the Electronics Test Division at the Naval Air Test Center, Patuxent River, Maryland, he remained there until November 1952 when he reported as a Consultant to the Director of the Fiscal Management Staff in the Office of the Assistant Secretary of Defense (Comptroller), Washington, DC. In December 1935 he became Senior Program Officer of Project VANGUARD at the Naval Research Laboratory, Washington, DC, and on November 20, 1959, he was ordered to the Office of the Chief of Naval Operations, Naval Department. Under orders of July 10, 1963, he was transferred to duty in the Office of Naval Research, Navy Department, to serve as Assistant Chief for Research.