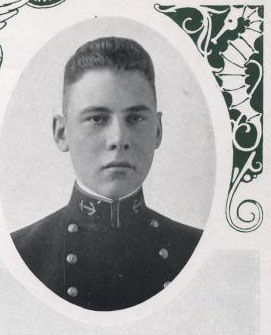 Oliver Wallace Gaines, the son of William Oliver Gaines and Mrs. (Lillie Dale) Gaines, was born on 15 June 1900, in Cynthiana, Kentucky. He attended high schools in Georgetown and Cynthiana, Kentucky, before his appointment to the US Naval Academy at Annapolis, Maryland, from his native state in 1916. While a Midshipman he had a World War I service in the USS Nevada. Graduated and commissioned Ensign on 7 June 1919, he attained the rank of Captain to date from 10 July 1943.

Following graduation from the Naval Academy in 1919, he joined the USS Nebraska , operating with the Battle Force. Detached from that battleship in February 1920, he reported on board the USS Brooklyn, which served as Flagship of Division ONE, Squadron ONE of the Asiatic Fleet, and later as flagship of the Pacific Destroyer Squadrons. From October 1920 to February 1921 had duty in the USS Kennison, also operating in the Pacific, after which he transferred to the USS Montgomery for a six months' assignment. Between February and August 1921, he was attached to the USS Yarborough, followed by engineering duty in the USS Jacob Jones. In October 1921 he was again assigned to the USS Yarborough for engineering duty.

From January to April 1923 he had instruction at the Naval Air Station, Pensacola, Florida, after which he joined the USS Williamson, operating with the Scouting Fleet. He had duty in her first in the engineering department and during his last month aboard served as Communication Officer. Transferred to the USS Henshaw, a unit of Squadron ELEVEN, Battle Fleet, in May 1924, he continued sea service in her until 1925. He served until November 1927 as Officer in Charge of the Naval Recruiting Station, Louisville, Kentucky, and following fitting out duty in the USS Lexington, joined that carrier upon her commissioning on 14 December 1927. He remained aboard until May 1930 while she operated with Aircraft Squadrons of the Scouting Fleet and Battle Fleet, successively.

Detached from the Lexington, he had instruction in general line at the Postgraduate School, Annapolis, Maryland. Completing the course there in May 1931, he attended the Junior Course at the Naval War College, Newport, Rhode Island. In June 1932 he became Executive Officer of the USS Breckinridge, and continued duty in that destroyer, while she operated as a unit of Destroyers, Scouting Force. He returned to the United States in June 1935 and was assigned until April 1937, to the Receiving Ship at San Francisco, California.

Completing a two years' tour of duty in the USS Henderson, a unit of Naval Transport Service, he transferred in May 1939 to the USS Kanawha. He assumed command of the USS Cahokia in June 1940, commanding that vessel until March 1941, when he reported for duty at the Naval Station, Guam. He was so serving when war was declared on Japan on 8 December 1941, and he was captured by the Japanese on 10 December of that year, when they invaded the island of Guam.

In September 1945 he was repatriated and following a period of hospitalization, was assigned in March 1946 to the Administration Division of the Mare Island Naval Shipyard at Vallejo, California. He remained there until May 1949, and after General Court Martial Duty in the Twelfth Naval District, San Francisco, California, he assumed command in November 1949 of the USS Ajax. Relieved of command of that vessel in August 1950, he then served in the Twelfth Naval District. Captain Gaines retired in December 1950.

Captain Gaines had the World War I Victory Medal, Transport Clasp (USS Nevada); the China Service Medal (USS Henderson); the American Defense Service Medal, Base Clasp; the Asiatic-Pacific Campaign Medal with one bronze star; and the World War Two Victory Medal. He also received the Prisoner of War Medal: "Lieutenant Commander Oliver Wallace Gaines (NSN: 0-20364), United States Navy, was captured by the Japanese during the fall of Guam on 9 December 1941, and was held as a Prisoner of War until returned to U.S. Military control at the end of hostilities in August 1945."

He was married to the former Phyllis Victoria Longworth of Vallejo, California, and they had two daughters. Captain Gaines passed away 31 May 1974 in Oakland, California.