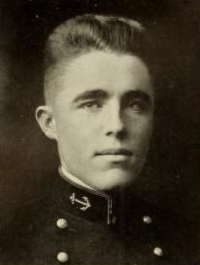 Vice Admiral Frank T. Watkins, USN, was born in Provo, Utah, on December 15, 1898. He attended Utah public schools and had a year at George Washington University in Washington, DC prior to his appointment to the US Naval Academy in 1918. He was graduated and commissioned Ensign on June 2, 1922, and was promoted through the various grades to Rear Admiral, to rank from August 1, 1948. He served in the temporary rank of Vice Admiral, from March 1, 1957 until August 27, 1958, when he reverted to his permanent rank of Rear Admiral. On January 1, 1961 he was transferred to the Retired List of the US Navy and was advanced to the rank of Vice Admiral, the highest rank he held while on active duty.

A veteran submariner, Admiral Watkins has spent twenty-four years of his Naval career in assignments connected with submarines. For more than five of those years he commanded submarines. In 1941, prior to the entry of the United States in World War II, he served a submarine observer in several British combatant ships and submarines operating in the Mediterranean and the North Atlantic. Shortly after the attack on Pearl Harbor, he was directed to organize and to command Submarine Division 102 for operations in the Pacific. For outstanding service in the two years of that command he was awarded the Legion of Merit with combat insignia. While in that command he also commanded USS Flying Fish on her Sixth War Patrol in 1943, and for “heroic achievement” in carrying out that patrol was awarded the Bronze Star Medal with Combat “V.”

He has served at sea or with the Fleet for twenty-two of his nearly forty years of Naval service, including command of the large cruiser, USS Guam, as Chief of Staff to Commander Submarines, Pacific, command of Cruiser Division 2 of the Atlantic Fleet, and command of the Mine Force, Atlantic Fleet. He commanded the Submarine Force, Atlantic during the period 1954 to 1957, when nuclear-powered and guided missile submarines first entered Fleet service.

His shore assignments have included duty as assistant Chief of Naval Personnel and as Deputy Chief of Naval Operations for Administration. In 1947 he organized and became the first Commanding Officer of the US Naval Schools, Monterey, California, one of which, the General Line School, provided instruction in naval science to several thousand former Naval Reserve Officers who were commissioned in the regular Navy following World War II.

In the rank of Vice Admiral he assumed command in March 1957, of the Antisubmarine Force, Atlantic, with the task of organizing and commanding the Anti­submarine Defense Force, Atlantic Fleet. This new command was officially established on July 1, 1957 embracing all antisubmarine warfare training, operations and defense in the Atlantic area. He also served as Commander Ocean Sub-area in the US Atlantic Command, and as Commander, US Atlantic Sub-area and Ocean Sub-area Atlantic in the Allied Command, Atlantic, of the North Atlantic Treaty Organization (NATO). On August 27, 1958 he reported in his permanent rank of Rear Admiral as Commandant of the Thirteenth Naval District with headquarters in Seattle, Washington with additional duty as Commander Naval Base, Bremerton.

“For exceptionally meritorious conduct…as Commander Antisubmarine Force, US Atlantic Fleet, from March to July 1957, at which time this  Force was superseded by the Antisubmarine Defense Force Command, US Atlantic Fleet, which he commanded and until August 8, 1958; as Commander Ocean Sub-Area Atlantic in the North Atlantic Treaty Organization from March 1957 to August 8, 1958; and as Commandant, Thirteenth Naval District, from August 27, 1958 to December 31, 1960…” he was awarded a Gold Star in lieu of the Second Legion of Merit. The citation continues in part:

“Exercising a high degree of professional ability, Rear Admiral (then  Vice Admiral) Watkins organized and became the first Commander Antisubmarine Defense Force, US Atlantic Fleet, a dynamic operational command for the defense of the East Coast of the United States and a key command in the defense posture of the continental United States. Through his sound judgment, precepts, and leadership, the antisubmarine warfare capabilities of the Navy’s western Atlantic forces have been advanced significantly. Additionally, Rear Admiral Watkins contributed greatly to the improvement of the effectiveness of those aspects of the Atlantic Fleet’s mission concerned with support of the Commander in Chief, Continental Air Defense Command. As Commandant, Thirteenth Naval District, he has continued to provide distinguished service in promoting harmonious relations with the civilian communities in his command and the adjacent Canadian communities…”

He continued duty as Commandant of the Thirteenth Naval District until relieved of all active duty pending his retirement effective January 1, 1961.

In addition to the Legion of Merit with Gold Star and Combat “V” and the Bronze Star Medal with Combat “V,” he has the Commendation Ribbon for a Letter of Commendation from the Secretary of the Navy for service in the Office of the Chief of Naval Operations during the latter period of World War II. He also has the Victory Medal (World War I); American Defense Service Medal, Base Clasp; Asiatic-Pacific Campaign Medal; American Campaign Medal; World War II Victory Medal; Navy Occupation Service Medal, Asia Clasp; and the National Defense Service Medal.