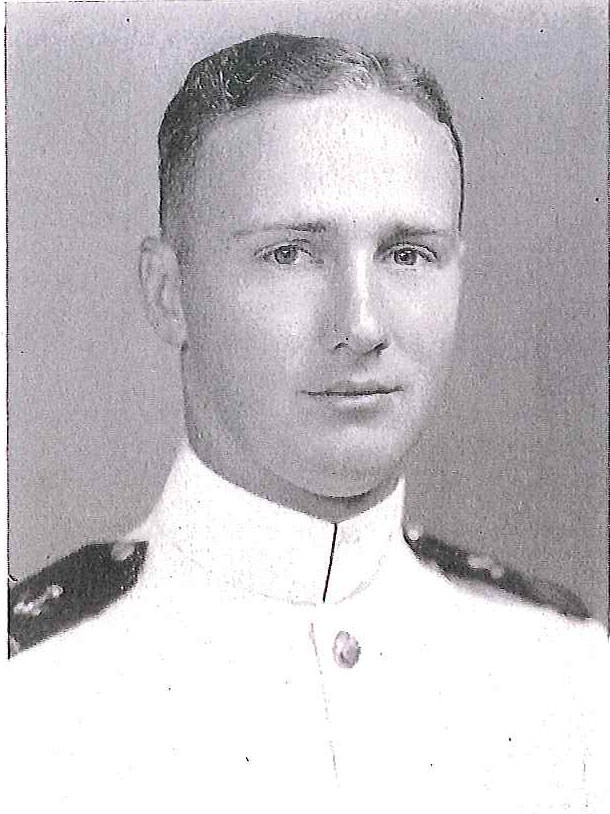 Clarence Edwin Bell was born in Hamlet, North Carolina, on July 25, 1916. He attended Maryland University for one year before his appointment to the US Naval Academy, in 1935. As a Midshipman he was Football Manager (3 years) and Goalkeeper. Graduated and commissioned Ensign on June 1, 1939, he subsequently advanced to the rank of Vice Admiral, to date from July 16, 1969.

After graduation from the Naval Academy he served for three months on board USS Yorktown (CV-5), then for two years was assigned to the destroyer USS Cole (DD-155). He attended Submarine School, from September through December 1941, and had World War II service as Communications Officer of USS Bonita (SS-165). Detached in October 1942, he joined USS Tinosa (SS-283) in November of that year, and in October 1943 became her Executive Officer. Tinosa was awarded the Presidential Unit Citation “For extraordinary heroism in action during her Fourth, Fifth and Sixth War Patrols in the restricted waters of the Carolines and the Philippines.” He was personally awarded the Silver Star Medal and a Gold Star in lieu of the Second Silver Star Medal.”

In April 1944 he returned to the Untied States to assist in fitting out USS Thornback (SS-418), in which he served as Executive Officer until after the Japanese surrender in September 1945. After three months’ duty as Executive Officer of USS Carp (SS-338), he reported for his first tour of shore duty as Assistant Submarine Officer Placement Officer in the Bureau of Naval Personnel. He remained there until May 1948, then assumed command of USS Diodon (SS-349), which, under his command, won the Battle Efficiency Pennant for 1950. From July 1950 until January 1951 he was a student at the Armed Forces Staff College, Norfolk, Virginia and for three years thereafter served on the Faculty and Staff of the Commander.

Reporting to the Submarine Tender USS Orion (AS-18), he served as Executive Officer from December 1953 until April 1955, during which period she won the Battle Efficiency Pennant for 1955. He commanded Submarine Division SIXTY-ONE for twelve months, and from May 1956 until July 1957 was Force Operations Officer on the Staff of Commander Submarines, Atlantic Fleet. In August 1957 he became Administrative Aide to the Vice Chief of Naval Operations and during the period August 1959 to July 1960 was a student at the National War College, Washington, DC.

He commanded the Attack Transport USS Cambria (APA-36) until August 1961, when he reported as Assistant for Plans and Program Review in the Office of the Assistant Chief of Naval Operations. In August 1963, he assumed command of USS Little Rock (CLG-4) and from October 1964 until February 1967 was Deputy Director for Inspection Services, Office of the Assistant Secretary of Defense (Administration), Washington, DC. “For exceptionally meritorious service…” in that capacity, he was awarded the Legion of Merit.

He next served as Commander Amphibious Group FOUR and in February 1968 became Director of the General Planning and Programming Division in the Office of the Chief of Naval Operations. In April 1969 he assumed the duties of the Director, Navy Program Planning, and on July 16, 1969 was officially appointed to the position in the rank of Vice Admiral. He was awarded the Distinguished Service Medal for the period July 1969 to January 1971. He next reported as commander Amphibious Force, US Atlantic Fleet. As such he had additional duty as Commander Amphibious Operations Support Command, US Atlantic Fleet from July 1972 until that command was disestablished on February 15, 1973. On November 1, that year, he was transferred to the Retired List of the US Navy. He was awarded a Gold Star in lieu of the Second Distinguished Service Medal “for exceptionally meritorious service…as Commander Amphibious Force, US Atlantic Fleet.