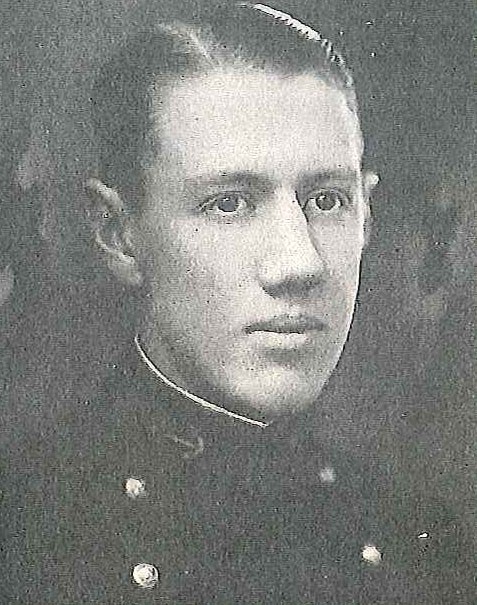 Captain Carlson was born on December 2, 1903, at Minneapolis, Minnesota, a son of Mrs. Freda Oren Carlson and the late Mr. August Carlson, both of Swedish ancestry. He was graduated from the Marshfield, Oregon, High School, and attended the University of Oregon for a short while before entering the United States Naval Academy, Annapolis, Maryland, on appointment from the State of Oregon in 1922. Graduated and commissioned Ensign on June 3, 1926, he progressively advanced to the rank of Captain, to date from August 1, 1943. He was transferred to the Retired List of the Navy in that rank on March 1, 1947.

Following graduation from the Naval Academy in June 1926, Captain Carlson had sea duty until 1932, serving consecutively aboard USS Maryland, operating with Battleship Division 5, Battle Fleet; USS Kanawha, a unit of Training Squadron 2, Fleet Base Force, based on the West Coast; USS Omaha, Flagship of Destroyer Squadrons, Battle Fleet; and USS Tarbell, operating with Destroyer Division 3, Scouting Force. From 1932 until 1935 he was a language student at the US Embassy, Tokyo, Japan, and upon returning to the United States, was assigned duty as Executive Officer of USS Kane. He was on board when that vessel was bombed on August 30, 1936, between Capt St. Vincent and the Straight of Gibralter by an unidentified Spanish plane.

After detachment from USS Kane, Captain Carlson served for a year in USS Texas, a unit of Battleship Division 5, Atlantic Squadron, and reported in 1939 to the Navy Department, Washington, DC for duty in the Office of Naval Intelligence. In 1940 he was attached to the Fourth Regiment, US Marines, in Shanghai, China, and the next year served at Headquarters, Sixteenth Naval District, Cavite, Philippine Islands, where he was on duty when the Japanese attacked Pearl Harbor on December 7, 1941.

In 1942-1943 Captain Carlson had communication duty with the Fleet Radio Unit, Melbourne, Australia, and after service the following year in the Office of Naval Communications, Navy Department, Washington DC, continued communication duty during the last months of the war with the Fleet Radio Unit, Pearl Harbor, TH. For exceptionally meritorious service while attached to the Division of Naval Communications throughout World War II, he was awarded the Legion of Merit, and cited as follows:

“For exceptionally meritorious conduct in the performance of outstanding service to the Government of the United States while attached to the Division of Naval Communications, from the beginning of hostilities to September 2, 1945. Discharging his important responsibilities with great skill and initiative, Captain Carlson rendered invaluable assistance in carrying out the vital operations of the Division of Naval Communications during a critical period in the history of our country. By his tireless efforts, outstanding professional ability and conscientious devotion to the fulfillment of an exacting assignment, he contributed materially to the successful prosecution of the war. His conduct throughout was inspiring to those with whom he served and reflects the highest credit upon Captain Carlson and the United States Naval Service.”

After the Japanese surrender Captain Carlson served with the US Naval Facilities in Shanghai, China, until relieved of active duty pending his retirement on March 1, 1947.

In addition to the Legion of Merit, Captain Carlson has the American Defense Service Medal, Base Clasp; the Army Distinguished Unit Badge (for service in the Philippines at the outbreak of the War); the Asiatic-Pacific Campaign Medal with one star; the Philippine Defense Ribbon with one star; the American Campaign Medal; and the World War II Victory Medal.