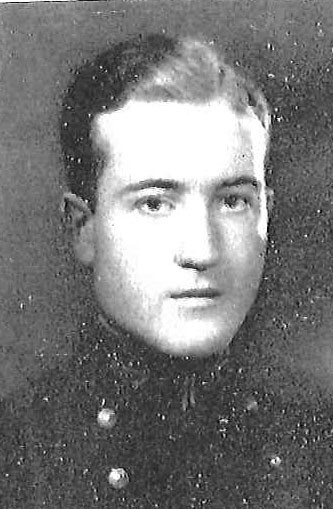 George Benedict Chafee was born in Newark, New Jersey, on December 30, 1908, son of Mrs. Earl W. (Edith Theall) Chafee and the late LtCol. Chafee. He attended Central High School in Washington, DC and entered the US Navy Academy, Annapolis, Maryland, on appointment from the State of Florida, on July 8, 1926. As a Midshipman he was Captain of the Intercollegiate Champion Small Bore Rifle Team in 1930. Graduating with the degree of Bachelor of Science, he was commissioned Ensign on June 5, 1930, and subsequently advanced in rank to that of Captain, to date from July 22, 1948.

After graduation from the Naval Academy he had Elimination flight training at Hampton Roads, Virginia, and in September 1930 joined USS Oklahoma, in which he served as a junior officer in gunnery until September 1931. He then reported to the Naval Air Station, Pensacola, Florida, as a flight student, and was designated Naval Aviator in September 1932. In October of that year he joined USS Langley, a unit of Carrier Division 2, Battle Force, for duty with Fighting Squadron 3, based on board, and served as a pilot in that squadron until June 1935, when he returned to Pensacola for two years’ duty as a Flight Instructor.

From July 1937 until May 1940 he was the senior Naval Aviator on board USS Pennsylvania, flagship of the Commander in Chief, US Fleet. When detached he again returned to Pensacola, this time serving until the outbreak of World War II in December 1941 as Executive Officer of VN2D8, a training squadron at the Naval Air Station there. In January 1942 he was sent to Bermuda, B.W.I., where for ten months he was Commanding Officer of Scouting Squadron 2D1 and Commander Fleet Air Detachment, participating in anti-submarine activities in that area. He was pilot of the first airplane to operate from Kings Point Naval Air Station.

During the period November 1942 until April 1943 he commanded Scouting Squadron 23 and the Air Group of USS Princeton during the commissioning and training period of that new carrier. In May he became the Air Officer of USS Cabot, and such participated in the Marshall Islands Campaign, including raids on Truk and Palau, and the Hollandia Campaign. He is entitles to the Ribbon for, and a facsimile of, the Presidential Unit Citation awarded the Cabot for “extraordinary heroism inaction” during the period January 1944 to April 1945.

Detached from Cabot in April 1944, he reported in June to the Navy Department, Washington, DC, for duty which lasted after the cessation of hostilities, until July 1947, in the Ship Installations Division of the Bureau of Aeronautics, as Assistant Director for Operations. From August 1947 until June 1948 he was assigned to the Naval Air Transport Service, as Chief Staff Officer to Commander Pacific Wing. With redesignation of that service to include the Military in July 1948, he was assigned duty as Personnel Officer, Pacific Division, on the Staff of Commander Military Air Transport Service.

In March 199 he reported to the Office of the Joint Chiefs of Staff, Washington, DC, where he served until December 1950 as a member of the Joint Military Transportation Committee. He commanded USS Timbalier (AVP-54) during the next ten months, and from November 1951 until August 1953 was Assistant Chief of Staff for Plans on the staff of Commander Air Forces, Pacific Fleet. He then returned to the Joint Chiefs of Staff Office for duty with the Joint Intelligence Group. When detached two years later he assumed command of Fleet Air Wing Two.

Under orders of October 8, 1956, he became Commanding Officer of the Naval Air Station, Hutchinson, Kansas, and on June 17, 1958, he was ordered detached and to duty as Chief of Plans, Officer of the Technical Director, Airways Modernizations Board Staff, Washington, DC.