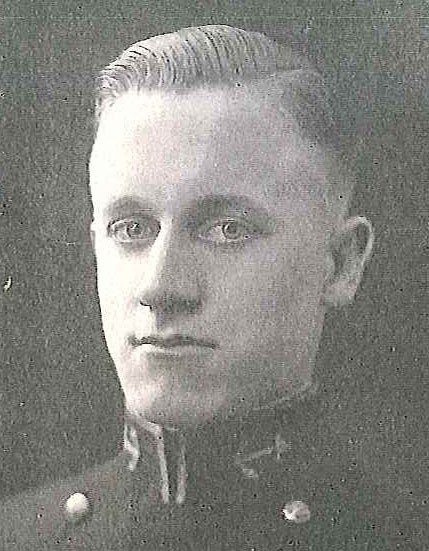 Captain Demarest was born on July 26, 1901, in Dighton, Michigan, son of Merton Wesley Demarest and Mabel Michael Demarest. He attended public schools of Modesto, California, and had enlisted service in the Navy from August 4, 1919, until honorably discharged on August 31, 1920, to enter the US Naval Academy, Annapolis, Maryland. Graduated and commissioned Ensign on June 5, 1924, he attained the rank of Captain to date from June 1, 1943.

Following graduation, Captain Demarest had consecutive sea duty in the Pacific from July 1924 until June 1929 in USS Tennessee, operating with Division 5, Battleship Divisions, Battle Fleet, and USS Farenholdt, a unit of Division 36, Destroyer Squadron 12, Battle Fleet. He returned to Annapolis, Maryland, on June 17, 1929, for the course in Radio Engineering at the Postgraduate School, and continuing instruction at various places under supervision of the Postgraduate School, received the degree of Master of Science (Communication Engineering) from Harvard University, Cambridge, Massachusetts, in July 1931.

Service aboard USS Omaha as Radio Officer from August 1931 until June 1932, preceded duty as Squadron Communication Officer on the staff of Commander Destroyer Squadron 2, Battle Force, and on May 3, 1934, he reported to the Commandant of the Sixteenth Naval District at Headquarters, Cavite, Philippine Islands, where he was assigned duty as Aide to the Commandant. He served there until July 26, 1935, and thereafter became Aide and Flag Lieutenant on the staff of Commander, Yangtze Patrol, USS Luzon, Flagship, to serve until detached in April 1936 to serve as Executive Officer, USS Luzon until May 2, 1937.

Returning to the United States, Captain Demarest served from June 1937 until December 1939 on the staff of the Postgraduate School and next reported to the Fourth Naval District Headquarters, Philadelphia, Pennsylvania, for duty in charge of fitting out USS Satterlee. He assumed command of that destroyer upon her commissioning, December 18, 1939. Relieved of command on October 8, 1940, after delivering the ship to the British at Halifax, NS, he proceeded to the Norfolk Navy Yard, Portsmouth, Virginia, to fit out USS Colhoun as her prospective Commanding Officer. Change of orders transferred him on December 26, 1940, a few days after the Colhoun was commissioned to USS Manley, and he commanded that destroyer transport, operating in the Atlantic and Pacific on training and patrol duty, for the succeeding year. During the first five months of 1941, he was Commander Destroyer Transports, Pacific Fleet.

On December 6, 1941, one day before the Japanese attack on Pearl Harbor, TH, Captain Demarest assumed command of USS Warrington, and remained in that command until August 30, 1943, during which time she operated on patrol and ocean escort duty in the Atlantic and Pacific. He again returned to Annapolis to serve staff of the Postgraduate School from October 2, 1943 until February 28, 1946, during which period he was Head of Department of Electronics Engineering and Physics.

Following temporary duty in the Office of the Chief of Naval Operations, Navy Department, Washington, DC, Captain Demarest reported on April 6, 1946, as Officer in Charge, Joint Communications Activities, Guam Island, Marianas Islands, with additional duty as Commanding Officer of Naval Communications Personnel, Guam Island. He was ordered in September 1947 to command of USS Pocono (AGC 16), flagship of the Commander in Chief, Atlantic Fleet.

He was detached from command of USS Pocono on February 9, 1949 and reported to the Director, Continental US Defense Planning Group, which group was administered for the Joint Chiefs of Staff by the Chief of Staff, US Army. He was detached from that duty on April 10, 1952, and reported as Commanding Officer, US Naval Radio Stations, Annapolis and Cheltenham, Maryland, and Arlington, Virginia.

When the US Naval Communication Station, Washington, DC, was established, it included the three radio stations and the Communication Center, Main Navy Building, and Captain Demarest was ordered as first Commanding Officer and assumed those duties on August 31, 1953, his present assignment.