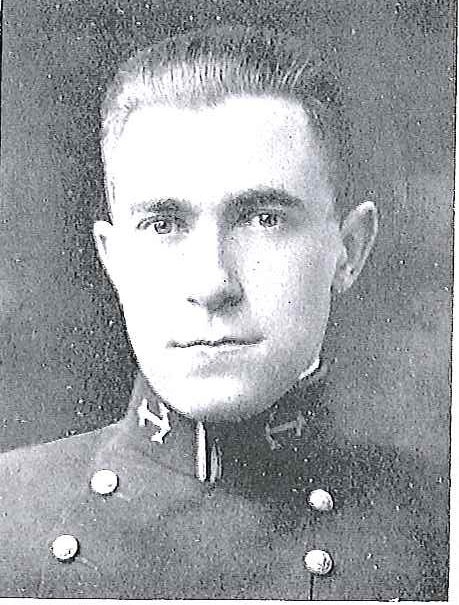 Henry Effingham Eccles was born in Bayside, New York, on December 31, 1898, son of the Reverend George Warrington Eccles and Mrs. Lydia Lee (Lawrence) Eccles. He graduated from Trinity School in 1917, and attended Columbia University, both in New York City, prior to his appointment, during the World War I period, to the US Naval Academy, Annapolis, Maryland, from his native state in 1918. As a midshipman he was Manager of the football and lacrosse teams, and was a member of the staff of the “Lucky Bag.” Graduated and commissioned Ensign on June 3, 1922, he subsequently progressed in rank, attaining that of Captain, to date from April, 1, 1943. On June 30, 1952, he was transferred to the Retired List of the US Navy, and was advanced to the rank of Rear Admiral on the basis of combat awards.

After graduation form the Naval Academy in 1922, he joined USS Maryland, and in March 1924, transferred to USS New York. Detached from the latter in December 1924, he was ordered to USS Chewink, training ship at the Submarine Base, New London, Connecticut, for submarine instruction. Completing his training in June 1925, he reported the next month aboard USS S-28. For a year, June 1927-June 1928, he continued duty afloat in the submarine S-25.

Returning to Annapolis, Maryland, he had instruction in diesel engineering at the Postgraduate School, and from June 1929 to September 1930 had further instruction at various places including Columbia University, New Yorkl from which he received the degree of Master of Science (mechanical engineering) in 1930. On October 13, 1930, he assumed command of USS O-1. Upon the decommissioning of USS O-1 in June 1931, he joined the USS R-13 as Executive Officer. He became Commanding Officer of that Submarine on June 15, 1932, and continued to serve in that capacity until June of the following year.

He was assigned until June 1935 as Engineer and Repair Officer at the Submarine Base, New London, Connecticut, after which he served in USS Salt Lake City. Detached from that cruiser in June 1938, he had duty for the next two years in the Design and Construction Division, Bureau of Engineering, Navy Department, Washington, D. C., where he remained until June 1940. Four months later he reported as Commanding Officer of USS John D. Edwards (DD 216) and was serving as such when the United States entered World War II, December 8, 1941. For his outstanding service in command of the John D. Edwards during the early period of the war, he was awarded the Navy Cross and the Silver Star Medal. The citations follow in part:

Navy Cross: “For especially meritorious conduct in actionwith the enemy. . . during a night engagement on February 19-20, 1942, with a greatly superior Japanese Naval force in the Badoeng Strait. Although under heavy fire from the enemy, Commander Eccles pressed home the attack which resulted in severe damage to the enemy, while receiving no damage to his own ship and only one casualty to his personnel.

Silver Star Medal: “For conspicuous gallantry and intrepidity . . . during the Battle of the Java Sea, February 27, 1942, and in offensive daylight action against the Japanese Battle Line of heavy and light cruisers. . .(He) fought his ship boldly throughout this hazardous engagement, going in unsupported, as a unit of Destroyer Division Fifty-Eight, to deliver a successful torpedo attack in two stages against the Japanese cruisers, forcing them to break off the attack and enabling the Allied ships to regain their battle formation. . .”

“Commencing with no precedent to guide him and no experienced staff to assist him, Captain Eccles skillfully developed and directed the establishment, administration and logistic support in the construction and maintenance of all advanced base units in the Central Pacific Ocean Area. During this period of tremendous expansion and resultant taxation of personnel and material, he displayed an outstanding degree of resourcefulness, ingenuity, sound judgment and planning  and a clear and realistic concept of the task to be accomplished coupled with the possession of the necessary professional skill and experience with which to accomplish it. His untiring efforts and unswerving devotion to duty contributed substantially to the successful prosecution prosecution of the war against the enemy in the Pacific. . .”

Returning to the United States in December 1945, following the capitulation of the Japanese the previous August, he became a member of the Joint Operations Review Board which was convened at the Army Navy Staff College for the purpose of analyzing the joint Army Navy Operations of the War.

When that institution, the highest level of education of the Armed Forces and State Department, was redesigned the National War College in April 1946, he continued on that duty until April 1947 when he left to command USS Washington. Shortly thereafter the Washington was ordered mothballed and in September 1947 he reported to the staff of the Naval War College, Newport, Rhode Island. There he organized, and for three and a half years conducted the Navy’s first courses in Logistics.

While at the Naval War College he wrote “Operational Naval Logistics” a pioneering examination of the fundamentals of this vital area of warfare. During this period he lectured on Logistics at the National War College, The Industrial College, the Command and General Staff College, and at the Air University.

In February 1951 he became Acting Chief of Staff at the Naval War College and so served until April 1951 when he was detached to report to London, England. There he became Assistant Chief of Staff for Logistics to the Commander in Chief, US Naval Forces Northeastern Atlantic and Mediterranean. When Admiral Carney became Commander in Chief Allied Forces Southern Europe, Captain Eccles served in a duel capacity by also becoming Assistant Chief of Staff for Logistics for this new NATO Command in Naples, Italy. In September 1951 he was detached from his national duties and thereafter served only in his international duty, forming and directing a staff division containing officers from US, and from French,Italian, Turkish and Greek Armies, Navies and Air Forces.

He was serving in that capacity when relieved of all active duty pending his retirement effective June 30, 1952.