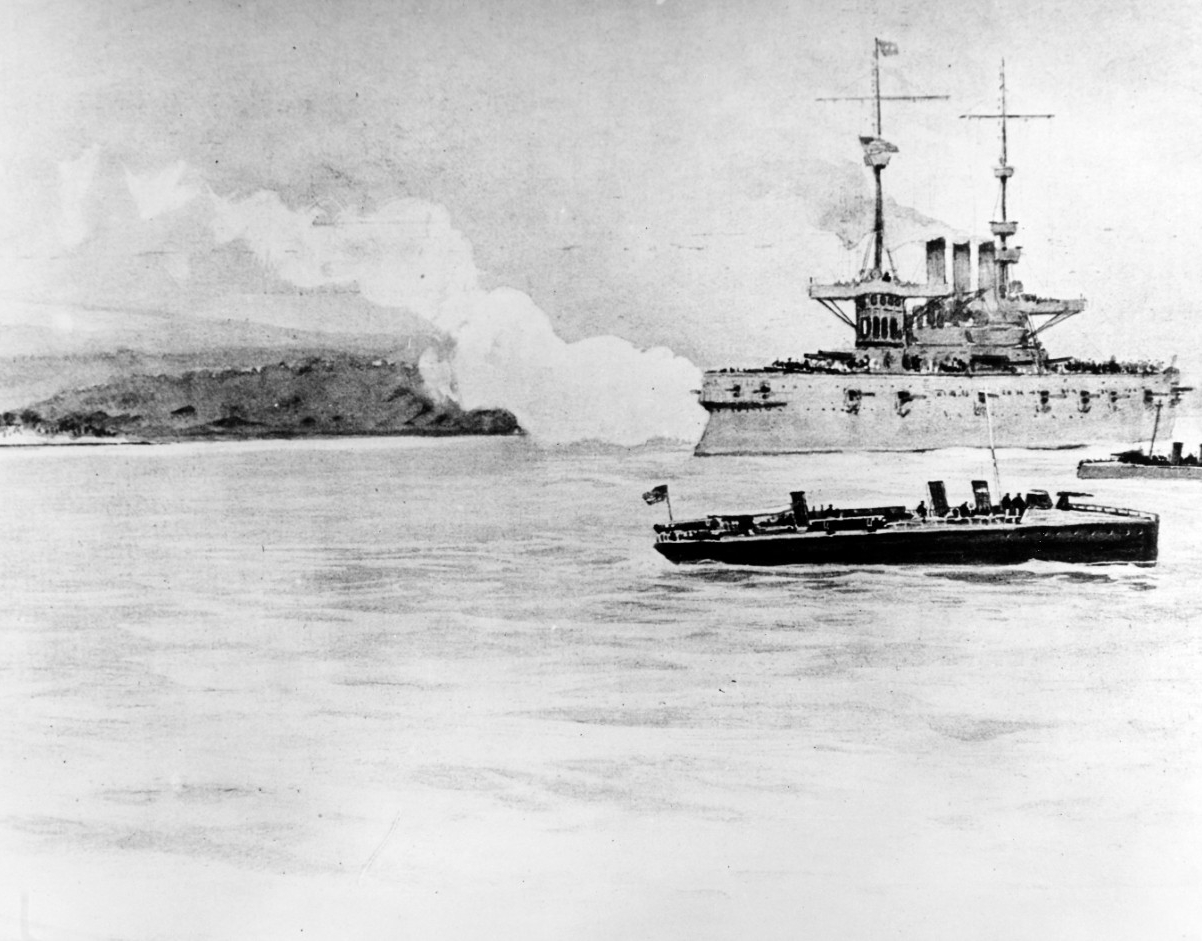 The fourth New York, an armored cruiser authorized by Congress in 1888, was laid down 19 September 1890 by William Cramp and Sons, Philadelphia; launched 2 December 1891; sponsored by Miss Helen Page; and commissioned at Philadelphia 1 August 1893, Capt. John Philip in command.

Assigned to the South Atlantic Squadron, New York departed New York Harbor 27 December 1893 for Rio de Janeiro; arriving Taipu Beach in January 1894, she remained there until heading home 23 March, via Nicaragua and the West Indies. Transferred to the North Atlantic Squadron in August, the cruiser returned to West Indian waters for winter exercises and was commended for her aid during a fire that threatened to destroy Port of Spain, Trinidad.

Returning to New York, the cruiser joined the European Squadron in 1895 and steamed to Kiel, where she represented the United States at the opening of the Kiel Canal. Rejoining the North Atlantic Squadron, New York operated off Fort Monroe, Charleston, and New York through 1897.

New York departed Fort Monroe 17 January 1898 for Key West. After the declaration of war in April, New York steamed to Cuba and bombarded the defenses at Matanzas before joining other American ships at San Juan in May, seeking the Spanish squadron. Not finding it, they bombarded fortifications at San Juan before withdrawing. New York then became flagship of Admiral Sampson's squadron as the American commander planned the campaign against Santiago; the battle, 3 July, resulted in complete destruction of the Spanish fleet.

The cruiser sailed for New York 14 August to receive a warrior's welcome. For the next year she cruised with various State naval militias to Cuba, Bermuda, Honduras, and Venezuela and conducted summer tactical operations off New England. On 17 October 1899, she departed New York for Central and South American trouble areas.

New York transferred to the Asiatic Fleet in 1901, sailing via Gibraltar, Port Said, and Singapore to Cavite, where she became flagship of the Asiatic Fleet. She steamed to Yokohama in July for the unveiling of the memorial to the Perry expedition. In October New York visited Samar and other Philippine islands as part of the campaign against insurgents. On 13 March 1902, she got underway for Hong Kong and other Chinese ports. In September, she visited Vladivostok, Russia, then stopped at Korea before returning to San Francisco in November. In 1903, New York transferred to the Pacific Squadron and cruised with it to Ampala, Honduras in February to protect American interests during turbulence there. Steaming via Magdalena Bay, the cruiser returned to San Francisco, for a reception for President Roosevelt. In 1904, New York joined squadron cruises off Panama and Peru, then reported to Puget Sound in June where she became flagship of the Pacific Squadron. In September, she enforced the President's neutrality order during the Russo-Japanese war. New York was at Valparaiso, Chile from 21 December 1904 to 4 January 1905, then sailed to Boston and decommissioned 31 March for modernization.

Recommissioning 15 May 1909, New York departed Boston 25 June for Algiers and Naples where she joined the Armored Cruiser Squadron 10 July and sailed with it for home on the 23d. Operating out of Atlantic and gulf ports for the next year, she went into fleet reserve, 31 December.

In full commission again 1 April 1910, New York steamed via Gibraltar, Port Said, and Singapore to join the Asiatic Fleet at Manila 6 August. While stationed in Asiatic waters, she cruised among the Philippine Islands, and ports in China and Japan. She was renamed Saratoga 16 February 1911.

The cruiser spent the next 5 years in the Far East. Steaming to Bremerton, Wash. 6 February 1916, Saratoga went into reduced commission with the Pacific reserve fleet.

As the United States drew closer to participation in World War I, Saratoga commissioned in full 23 April 1917, and joined the Pacific Patrol Force 7 June. In September, Saratoga steamed to Mexico to counter enemy activity in the troubled country. At Ensenada, Saratoga intercepted and helped to capture a merchantman transporting 32 German agents and several Americans seeking to avoid the draft law. In November, she transited the Panama Canal joining the Cruiser Force, Atlantic Fleet at Hampton Roads. Here she was renamed Rochester, 1 December 1917.

After escorting a convoy to France, Rochester commenced target and defense instruction of armed guard crews, in Chesapeake Bay. In March 1918, she resumed escorting convoys and continued the duty through the end of the war. On her third trip, with convoy HM-58, a U-boat torpedoed British steamer Atlantian 9 June. Rochester sped to her aid; but Atlantian sank within 5 min. Other ships closed in, but the sub was not seen again.

After the Armistice, Rochester served as a transport bringing troops back home. In May 1919, she served as flagship of the destroyer squadron guarding the transatlantic flight of the Navy's NC seaplanes. In the early 1920's she operated along the east coast. Early in 1923, Rochester got underway for Guantanamo Bay to begin another period of service off the coasts of Central and South America. In the summer of 1925, Rochester carried General Pershing and other members of his commission to Arica, Chile to arbitrate the Tacna-Arica dispute and remained there for the rest of the year. In September 1926 she helped bring peace to turbulent Nicaragua and from time to time returned there in the late 1920's.

After a quiet 1927, Rochester relieved Tulsa at Corinto, Nicaragua in 1928 as Expeditionary Forces directed efforts against bandits in the area. Disturbances boiled over in Haiti in 1929, and opposition to the government was strong; inasmuch as American lives were endangered, Rochester transported the 1st Marine Brigade to Port-au-Prince and Cap Haitien. In 1930, Rochester transported the 5-man commission sent to investigate the situation. In March, she returned to the area to embark marines and transported them to the United States. She aided Continental Oil tanker H. W. Bruce, damaged in a collision 24 May.

In 1931, an earthquake rocked Nicaragua. Rochester was the first relief ship to arrive on the scene and ferried refugees from the area. Bandits took advantage of the chaotic conditions and Rochester steamed to the area to counter their activities.

Rochester departed Balboa 25 February 1932 for service in the Pacific Fleet. She arrived Shanghai 27 April, to join the fleet in the Yangtze River in June and remained there until steaming to Cavite, to decommission 29 April 1933. She moored at the Olongapo Shipyard for the next 8 years. Her name was struck from the Navy Register 28 October 1938, and she was scuttled in December 1941 to prevent her capture by the Japanese.