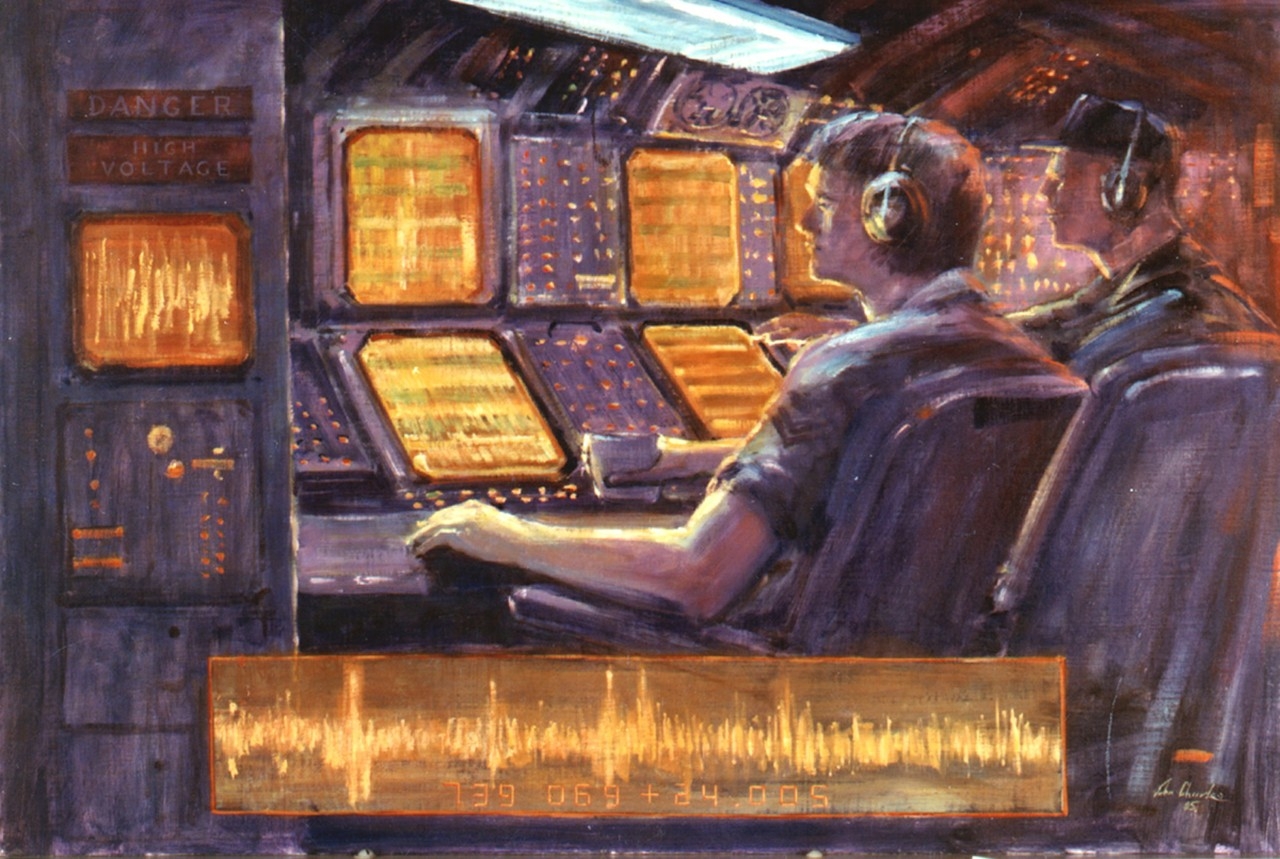 Although Radio Detection and Ranging (radar) and Sound Navigation and Ranging (sonar) rely on two fundamentally different types of wave transmissions, both are remote sensing systems. Radar sends out electromagnetic waves, while sonar transmits acoustic waves. In both systems, waves return echoes from certain features that allow the determination of size, shape, distance, and speed of the target. Radar signals are primarily for surface and atmospheric observations, because electromagnetic waves are diminished in the water. Sonar signals easily penetrate the water and are ideal for underwater navigation and detection.

Leo C. Young and Dr. Alfred Hoyt Taylor made the first U.S. observations of the radio reflection phenomenon. Eight years after the initial discovery, scientists noted that the reflections of radio waves from aircraft could be detected. From 1930 to 1940, the U.S. Naval Research Laboratory explored the use of radio for ranging and detection, and in 1935, the Committee on Naval Appropriations of the U.S. House of Representatives provided $100,000 to the Naval Research Laboratory for the development of radar. The research led to the first U.S. radar, the XAF, which was permanently installed on USS New York (BB-34) in 1939. By the time the Japanese attacked Pearl Harbor on 7 December 1941, 20 radar units had been installed on selected ships. The radar units helped contribute to U.S. Navy World War II victories at the Battle of the Coral Sea, Battle of Midway, and Guadalcanal.

Development of the modern sonar began in the 1920s when advancements in applying underwater sound to practical needs became abundantly clear. During this time and with advances in electronics, depth sounding by ships and echo ranging on submarines was developed. Thomas Edison and other scientists became involved in the research of passive listening devices. Other researchers explored the physics of oceanography in which later work would be based.

Work rapidly began on the development of sonar at the onset of World War II due to the German U-boat threat. German submarines torpedoed Navy-escorted convoys at a record pace. At one point during the war, ships were being sunk faster than the U.S. could replace them. Some of the ships were sunk within view of the U.S. eastern seaboard. The mobilization of the U.S. workforce turned the tide of the war. Without the development of sonar, the U-boat threat would probably have never been contained.

After the war, development of underwater detection devices continued. In 1949, the Naval Research Laboratory reported they could detect submarines at ranges of 10–15 nautical miles using SOFAR (Sound Fixing and Ranging) hydrophones. By the end of the year, submarines could be detected several hundred miles away. That same year, Dr. Maurice Ewing—world-famous oceanographer and a pioneer in the research of underwater sound—established a SOFAR station in Bermuda. Also during this year, the Committee on Undersea Warfare of the National Research Council met to discuss a long-term program to meet the threat of the Soviet Union’s submarine force. Considered critical to national survival was the ability to transport people and goods across the high seas in the wake of the Soviet threat. The committee recommended a long-term program needed to be formulated. The Hartwell Committee was formed to conduct the broad study.

In the fall of 1950, the Hartwell Committee recommended the development of nuclear powered submarines. It also recommended the detection of submarines using real time spectral analysis of radiated sound energy for the future of antisubmarine warfare. During the same time, the Chief of Naval Operations directed Admiral Thorwald A. Solberg, Chief of Naval Research, to “proceed with arrangements with Bell Telephone Laboratories to institute a program of research and development in the field of low-frequency sonar.” In the months that followed, rapid progress was made in the field of long-range detection.

The two most important factors in the development of sonar was the discovery that low-frequency sounds could travel great distances in the ocean, and the realization that submarines radiate identifiable low-frequency energy. The work of Bell Laboratories was also an important element. 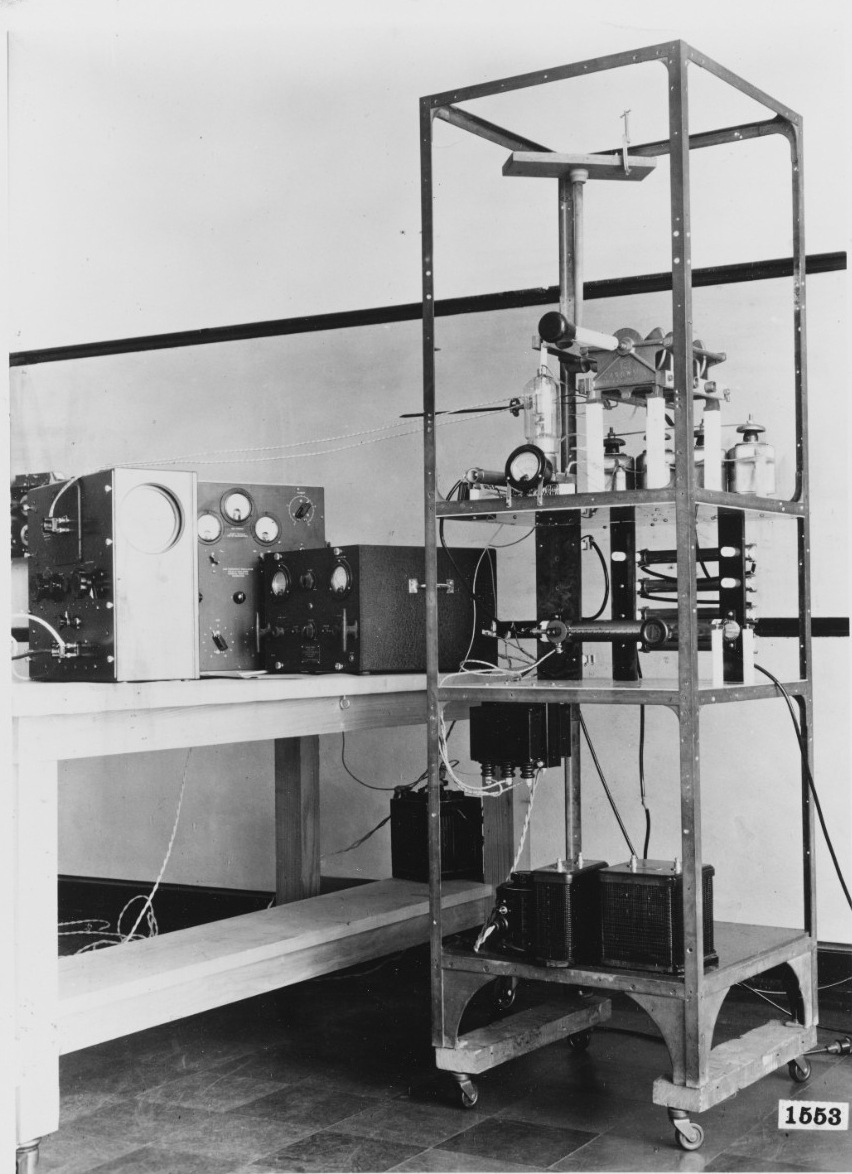 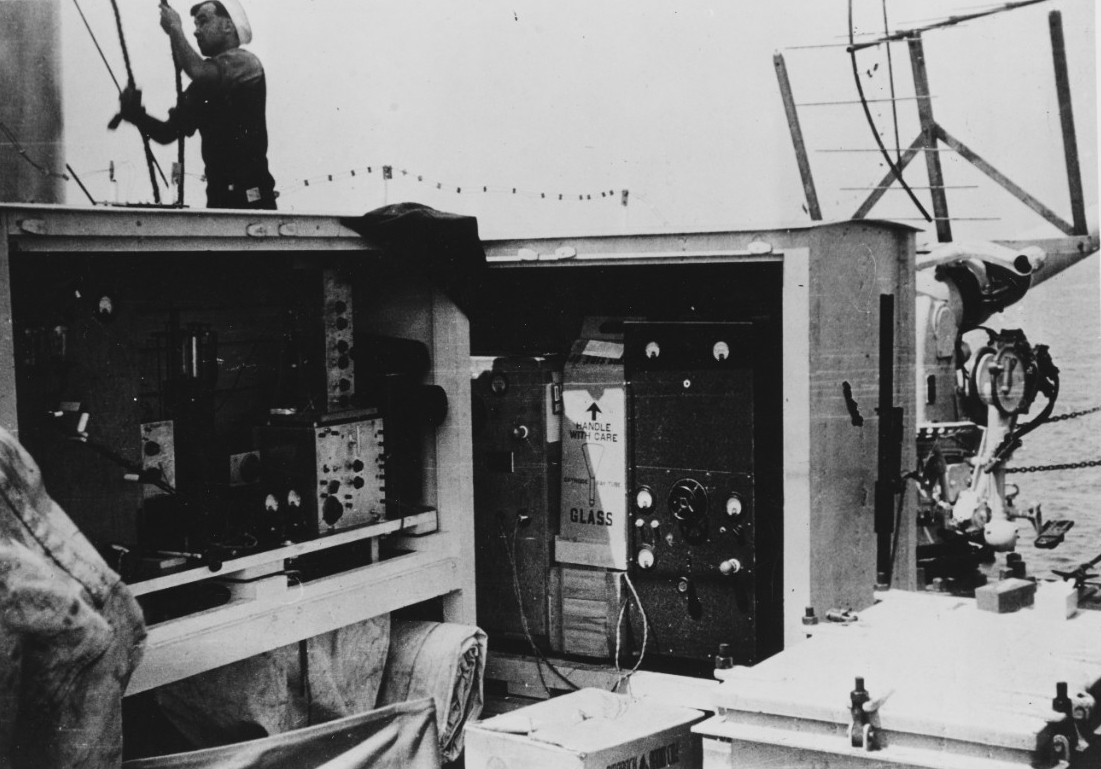 First test of radar onboard a ship. U.S. Naval Research Laboratory's 200-megacycle radar equipment on USS Leary (DD-158) in April 1937. The radar antenna was mounted on the barrel of one of the ship's 4/50 guns (visible at right), allowing it to be trained in azimuth and elevation. Official U.S. Navy photograph from the collections of the Naval History and Heritage Command, NH 51280. 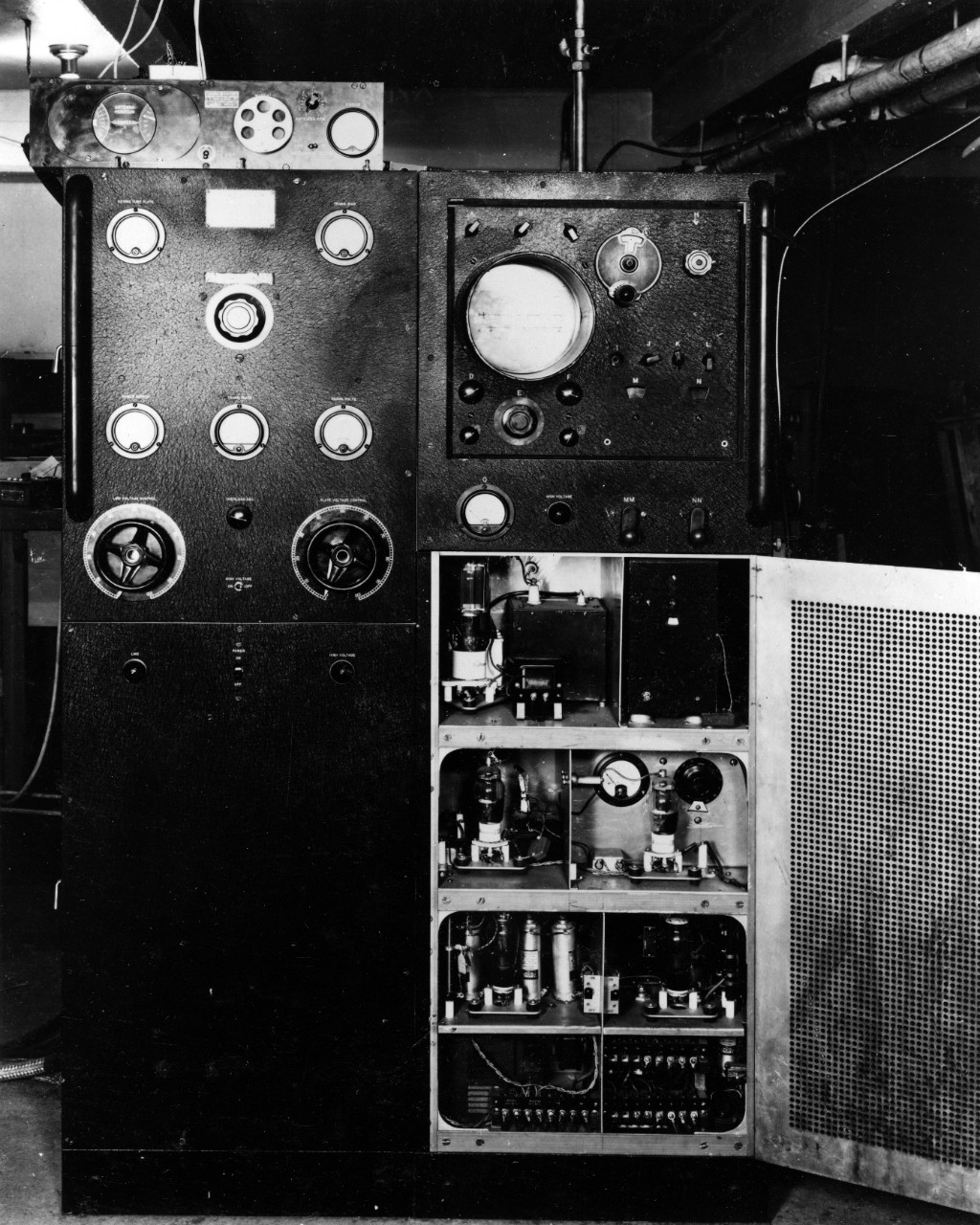 XAF Radar (transmitter and receiver), which was installed on USS New York (BB-34) by the U.S. Naval Research Laboratory in late 1938. While mounted on that ship, the experimental 200-megacycle radar was tested at sea during the first months of 1939. Official U.S. Navy photograph from the collections of the Naval History and Heritage Command, NH 105852. 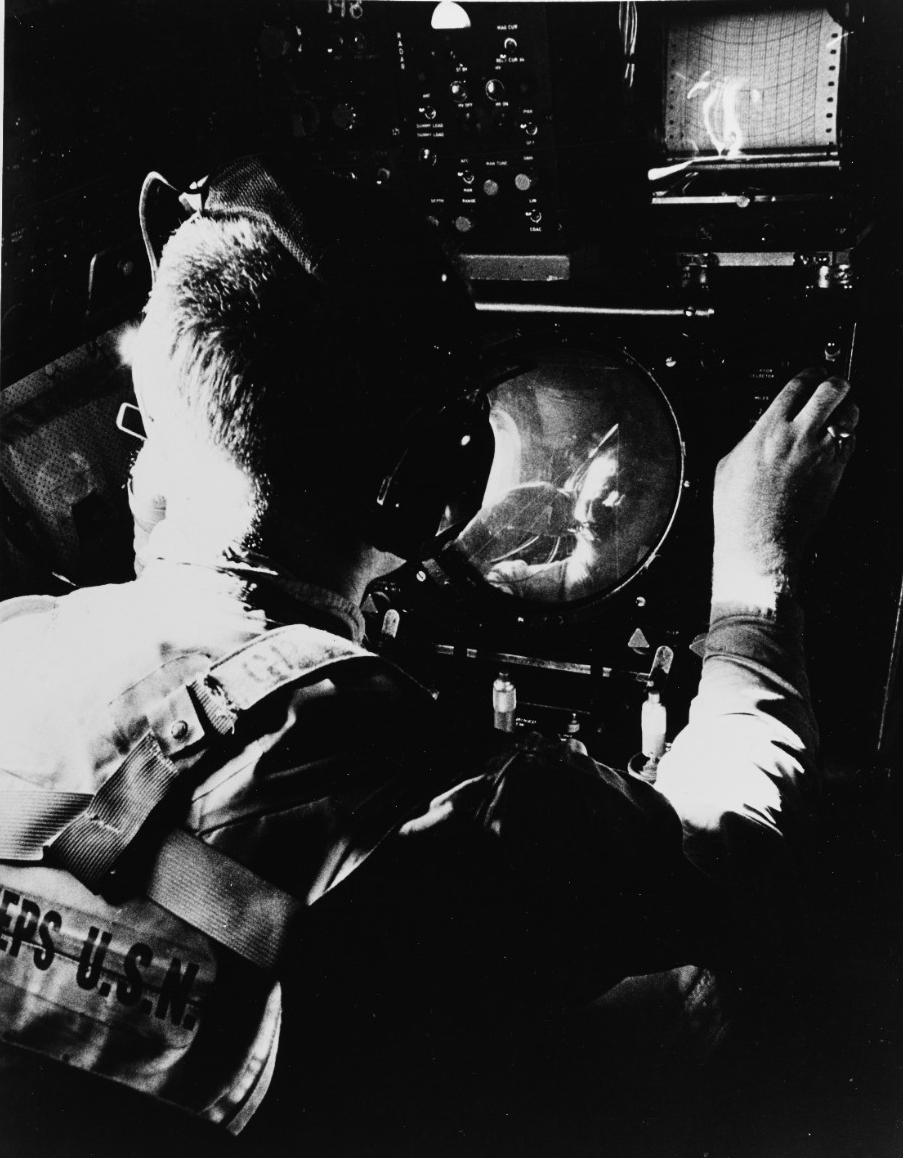 The radar operator aboard a P5 Marlin patrol aircraft of Patrol Squadron 40 (VP-40) helps guide his aircraft towards an unidentified surface contact off the coast of Vietnam, June 1965. National Archives photograph, USN 1142216. 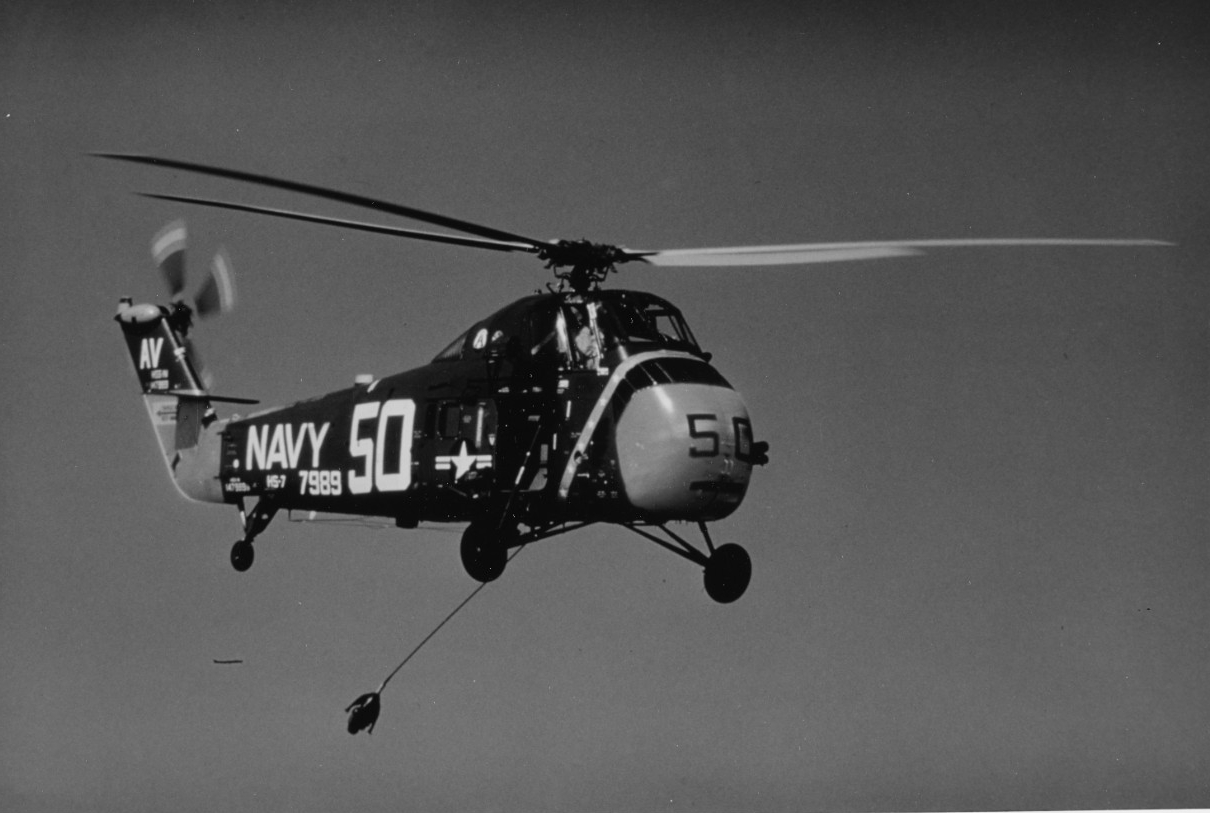 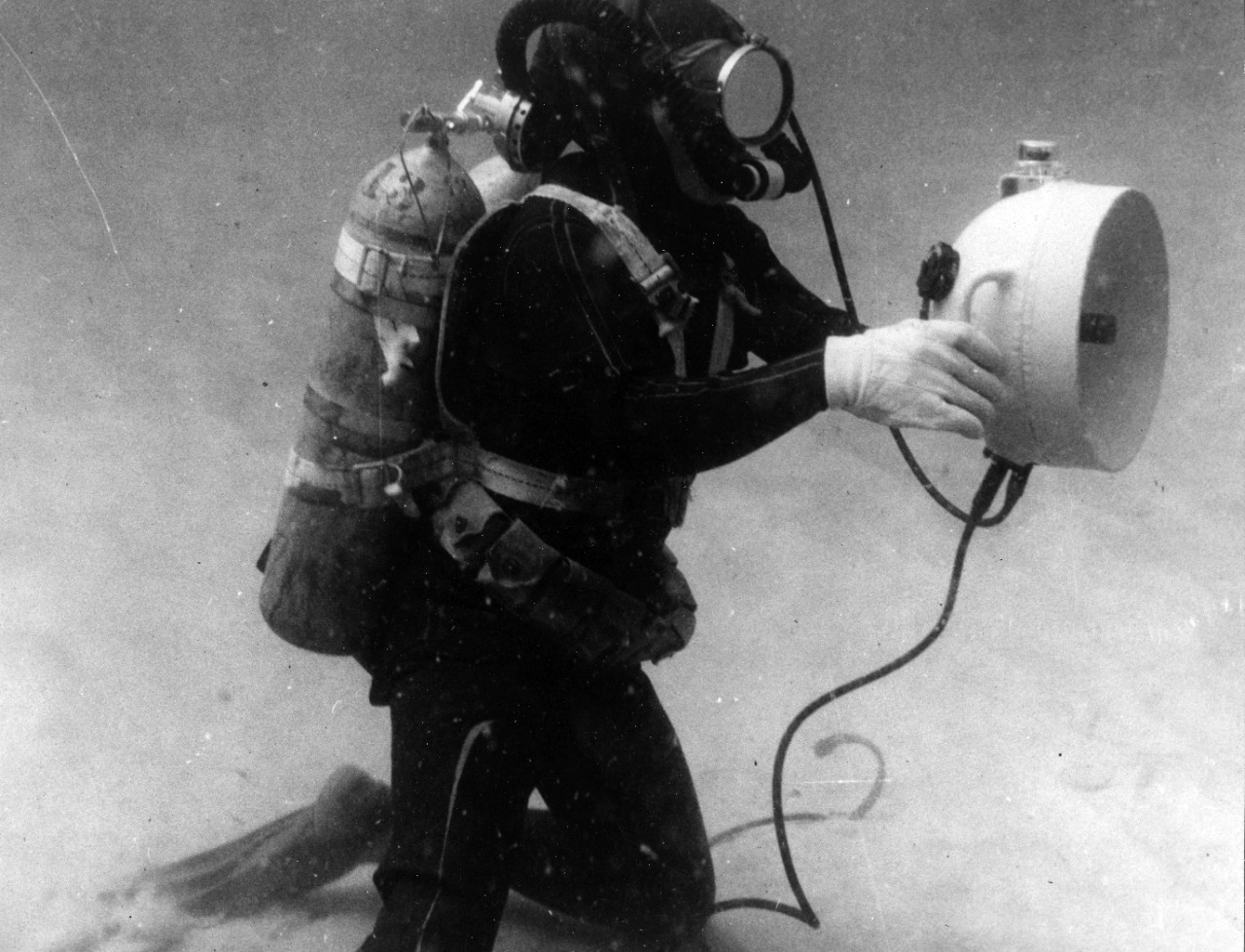 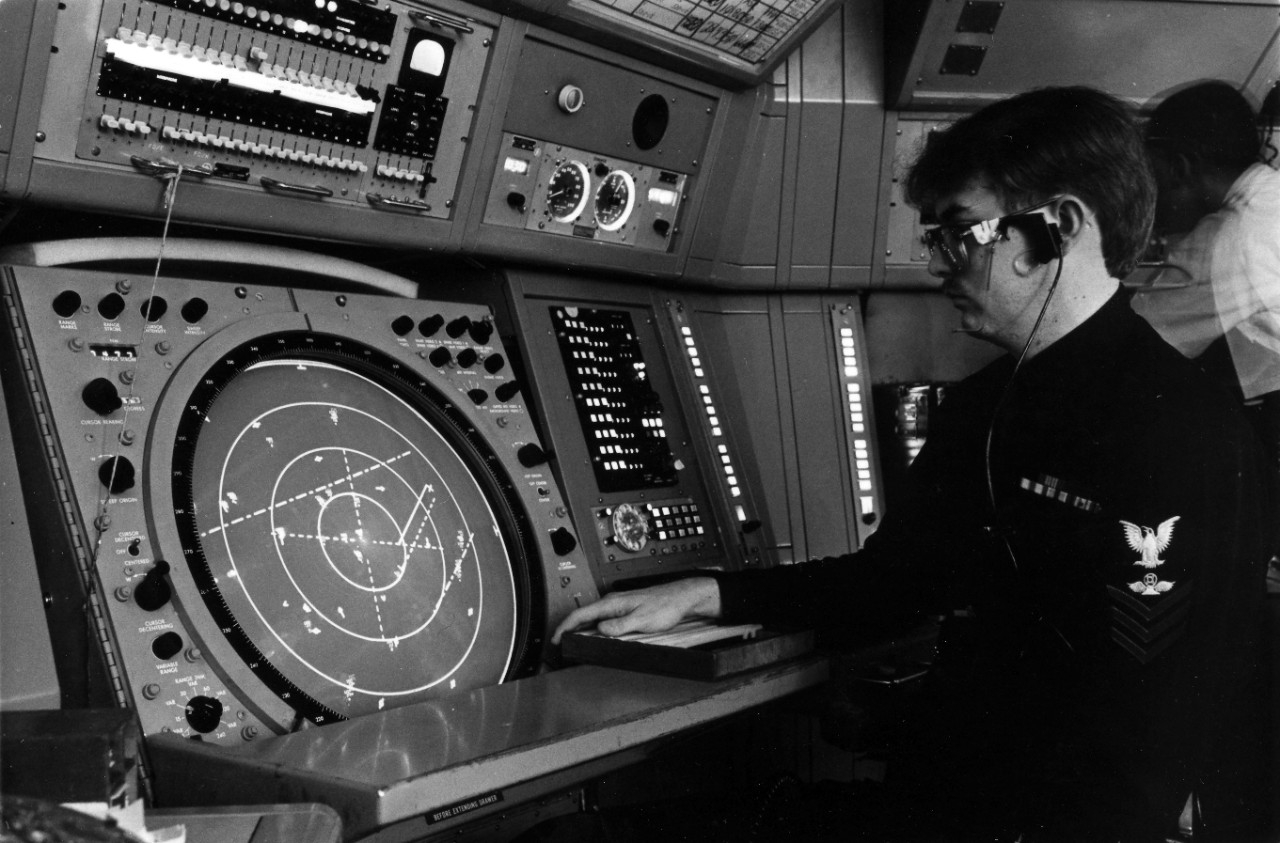 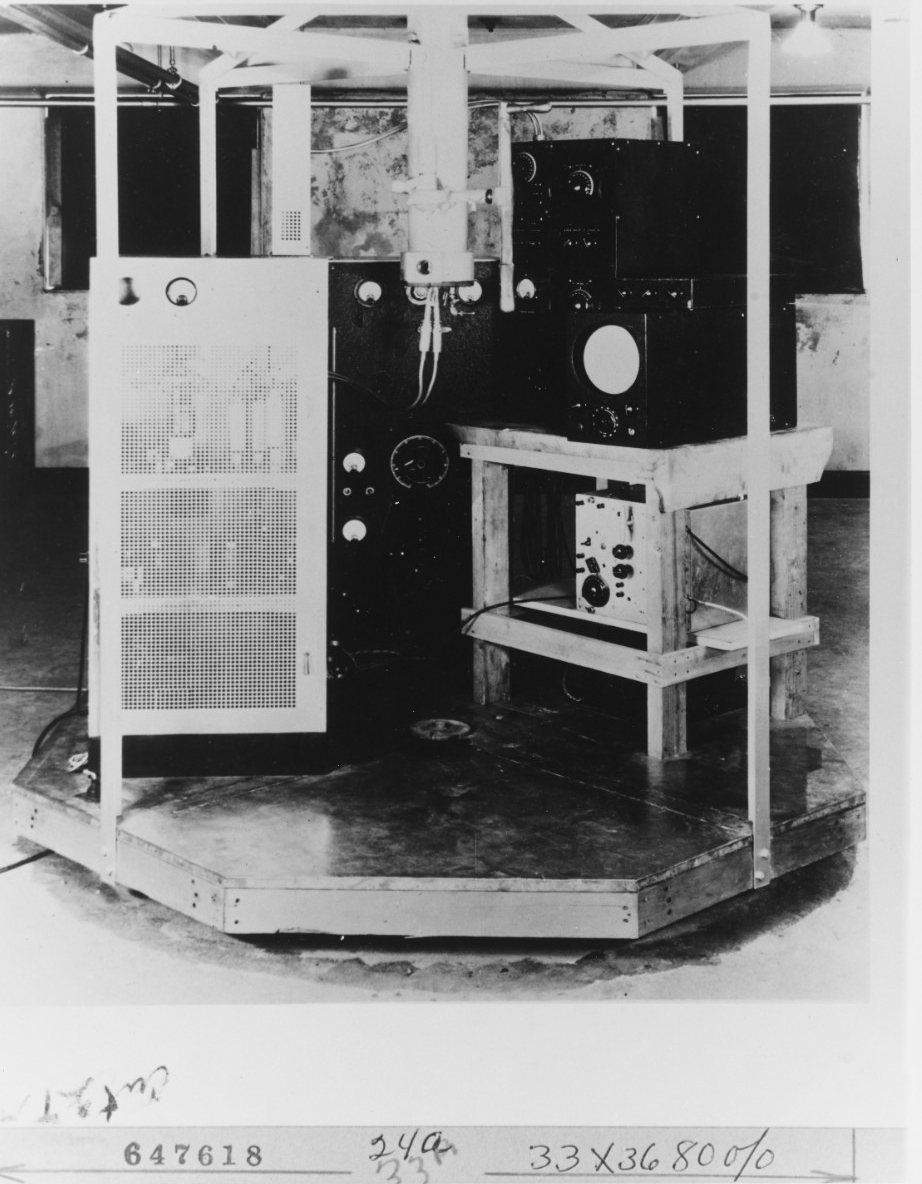 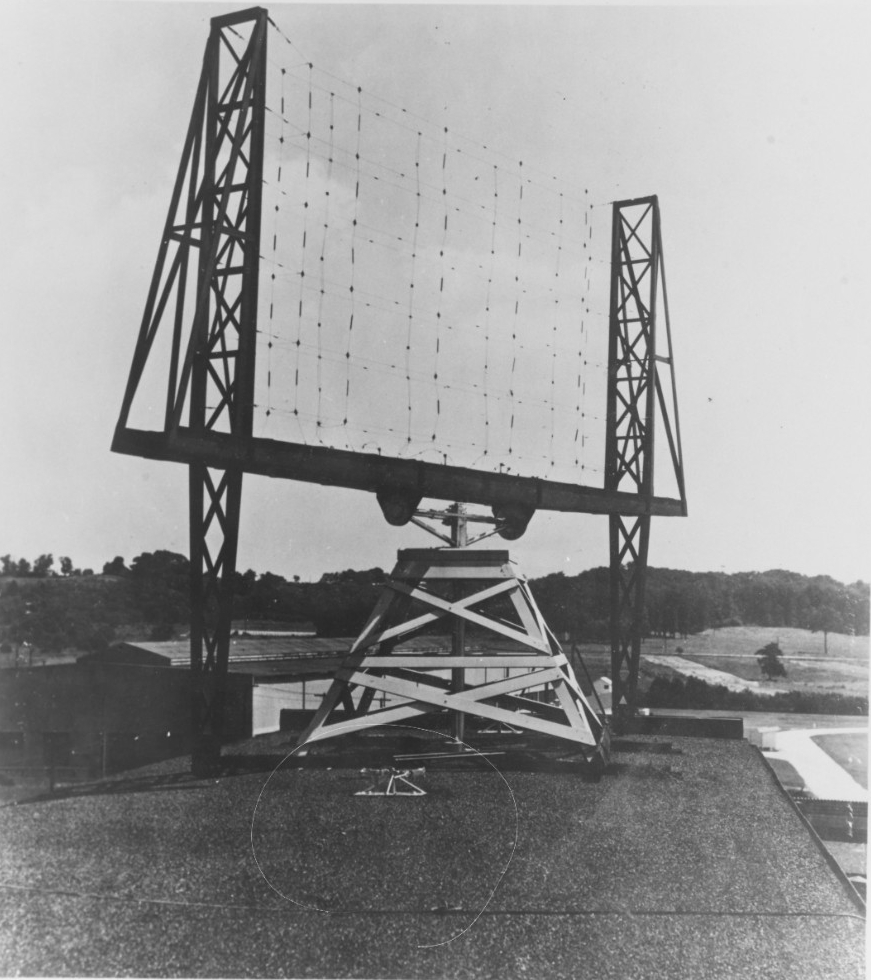 First Rotating Beam Radar Antenna  (for 200 megacycle radar used for transmitting and receiving) developed by the Naval Research Laboratory (NRL) in 1937. This view shows the antenna installed topside on a NRL building in Anacostia, District of Columbia, at about that time. This was a so-called 'dirigible' antenna, meaning it is mounted so that it can be turned to allow for around-the-compass search. Official U.S. Navy photograph from the collections of the Naval History and Heritage Command, NH 41638. 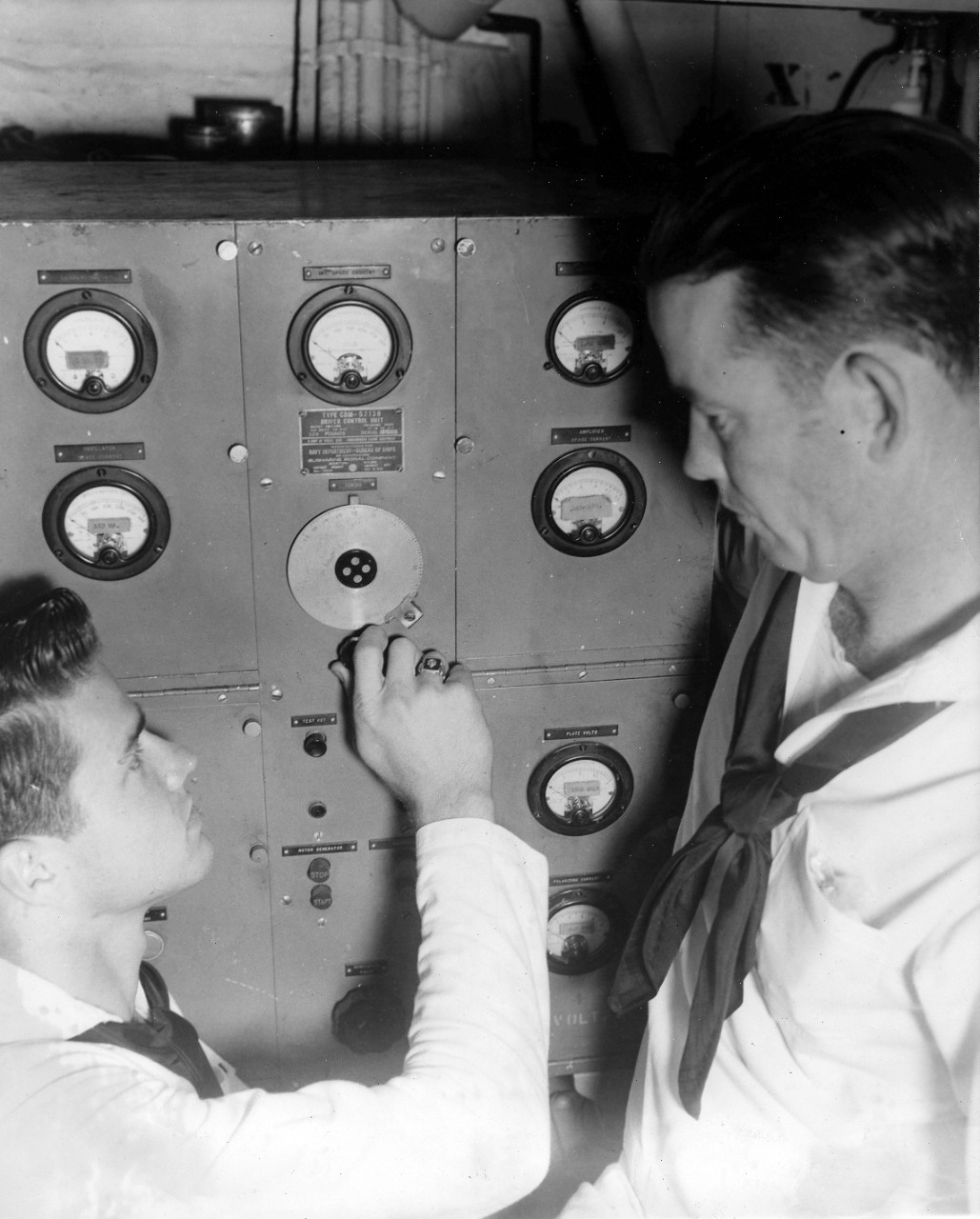 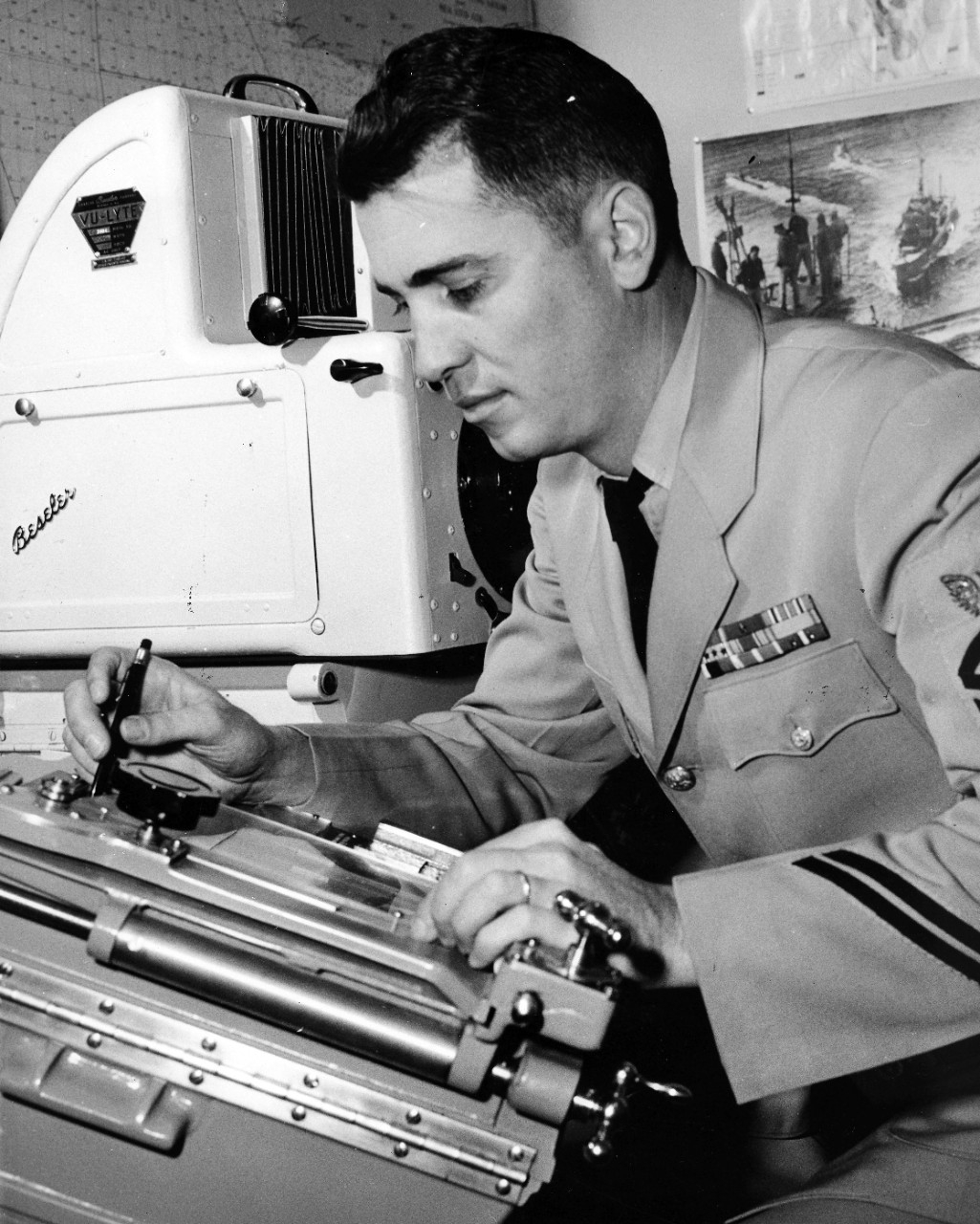 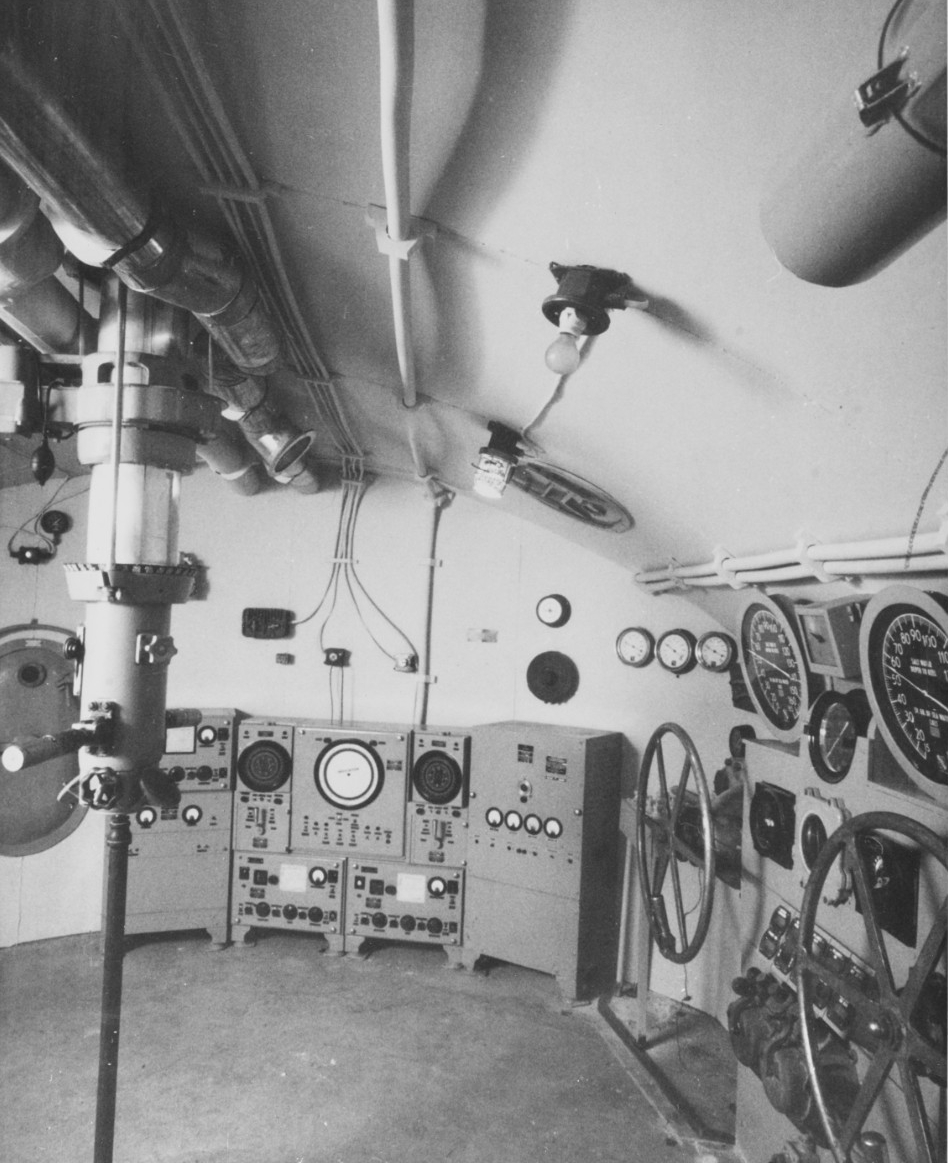 USS Tautog (SS-199) exhibit in the Milwaukee Public Museum. Looking aft, to the right are the depth gauges and the plane wheels, which are rigged out. All gauges are lit. The museum was attempting to get a better "blip" target indication on the sonar. Naval History and Heritage photograph, NH 68455. 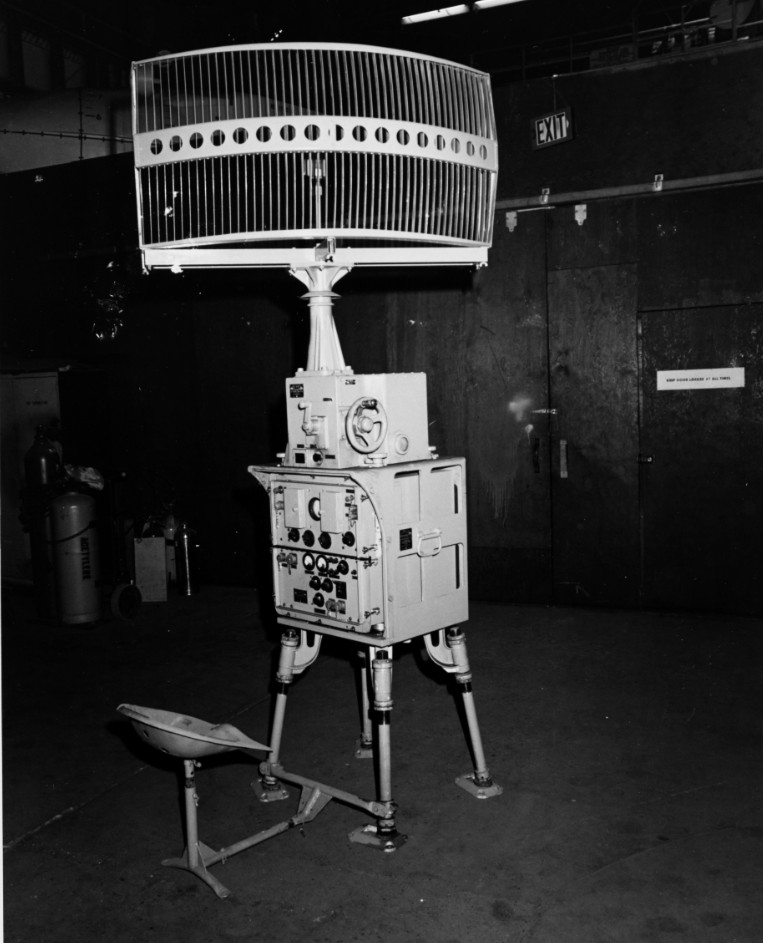 “SQ” Portable Search Radar. Equipment received from USS Commencement Bay (CVE-105) in 1971. It was photographed at the Navy Memorial Museum, Washington Navy Yard, Washington, DC, in 1978. This type of radar was used as a supplemental shipboard system during the later stages of World War II. Naval History and Heritage Command photograph, NH 89034.