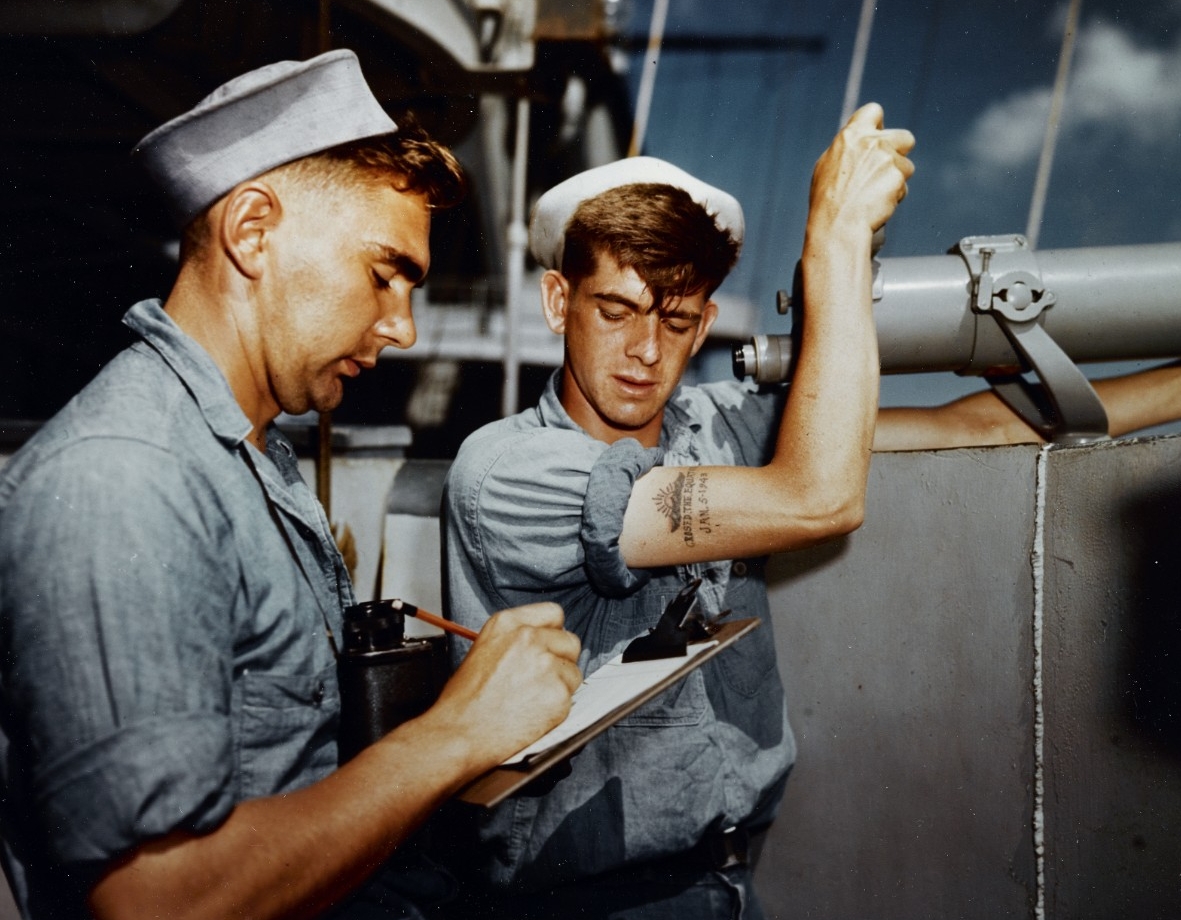 “The universality of tattooing is a curious subject for speculation….”

Despite numerous learned studies and analyses of various aspects of tattooing—sociological, artistic, psychological—the actual lore of this form of body art remains largely non-academic and often based on oral tradition centered around certain tattoo artists and styles. However, there is no dispute that tattooing was practiced in early societies in Europe and Asia, and by indigenous cultures worldwide for thousands of years. Although there are indications that seafarers bore tattoos before the 1700s, Captain James Cook’s voyages of exploration in the Pacific during the second half of the 18th century exposed Royal Navy sailors to Polynesian body art. These brought tattoos back to their fellow seamen in Europe and America. In fact, the word “tattoo” is derived from the Polynesian tatau, which indicated indelibly marking the human body and phonetically imitated the sound of the rhythmic tapping of traditional tattoo instruments (usually needles fashioned from boar's tusks) used to pierce a subject’s skin. Tattooing spread quickly from British to American sailors. Staving off boredom during long hours at sea, sailors doubled as amateur tattooists. By the late 18th century, around a third of British and a fifth of American sailors had at least one tattoo. Spurred by 19th-century whaling expeditions and long trading voyages, tattooing continued to spread among both naval and merchant seamen—and from them to landlubbers.

During the Civil War, tattoos commemorating the historic clash between the ironclads USS Monitor and CSS Virginia made their way into both navies, along with more general motifs such as military insignia and names of sweethearts. As newly tattooed Sailors returned home at war’s end, the work of Civil War–era tattooists spread around the country.

In 1898, at the onset the Spanish-American War, Sailors rushed to have the slogan “Remember the Maine” tattooed on their chests before heading out to avenge her sinking. By this time, these tattoos had already acquired features recognized today as essential elements of military and patriotic tattoos: the curved scroll with a slogan, name, or date; the stars and stripes; or a giant eagle backdrop—many of them proliferated thanks to the newly invented electric tattoo machine. 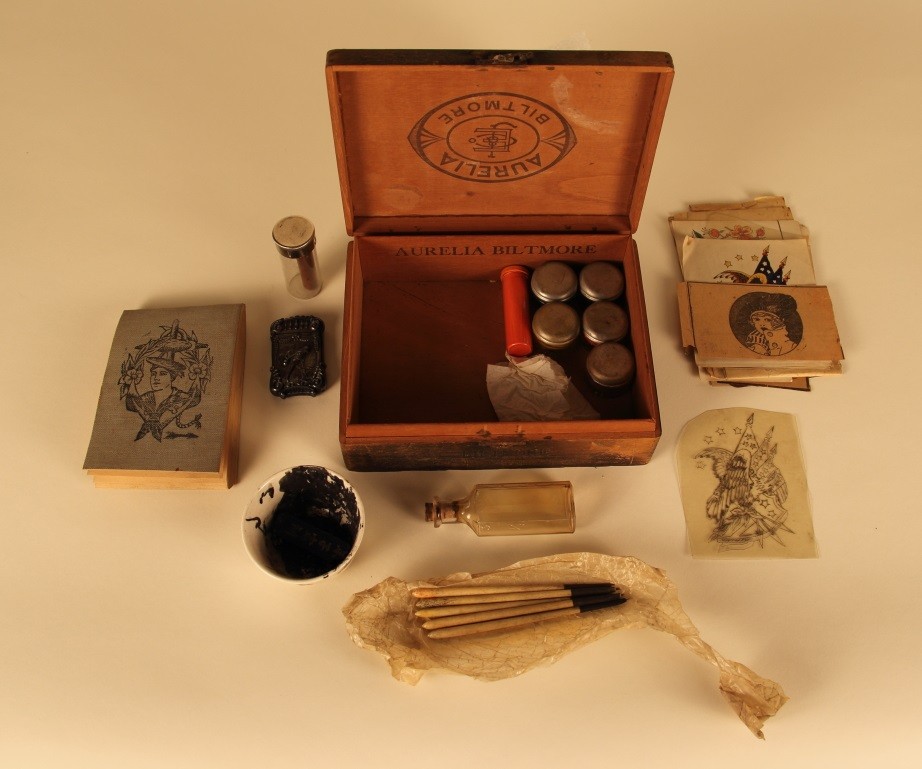 Tattoo kit formerly belonging to Frank Osberry (Asberry) Rogers. Note wooden needles, ink, and “flash art” (motif samples). Rogers was born 22 January 1885, enlisted in Navy on 4 May 1901, and served until 21 January 1906 aboard USS Pensacola (receiving ship), USS Alert (steam launch), USS Independence (receiving ship), and USS Marblehead (Cruiser No. 11). After his service, Rogers worked as a boilermaker and steeplejack in Pueblo, Colorado. He died 16 January 1940. While in the Navy, he ran a side business tattooing fellow sailors, purportedly specializing in dragons and hearts. From the collection of Puget Sound Navy Museum; photo courtesy of Megan Churchwell.

During World War I—in line with the Progressive era’s sense of higher purpose that also abolished alcohol rations in the Fleet—Navy recruits were strongly encouraged to get any risqué art covered up, since perceived "moral" failings might disqualify them from service. This was accomplished by having the offending (usually) female figure “dressed” or another design tattooed over it. Sailors also sought patriotic tattoos reflecting their enthusiasm for America’s participation in the conflict.

However, those with body art were to remain somewhat marginalized well into the 20th century. Tattoos were still largely perceived to be the questionable marks of seafarers, specific blue-collar trades, and of any number of less savory societal groups—and an object of fascination in sideshows and, later, burlesque clubs.

Designs of tattoos worn by Navy personnel can be gleaned from early personnel records, in which body art was recorded in the category of “distinguishing marks.” These records also testify to the longevity of motifs still worn by some Sailors today. A number of celebrated tattooists, their names often prefaced with "Sailor" and each propagating a distinctive style, opened shop in ports of call and around naval bases. Shipboard "artists" also continued to flourish. The vast expansion of the Navy during World War II laid the groundwork toward greater social acceptance of tattoos and ultimately toward body art's embrace by the mainstream today. This, and the increasingly multicultural pool of recruits entering the Navy in the 21st century, led to the liberalization of regulations governing tattoos—the least restrictive among the U.S. branches of service. 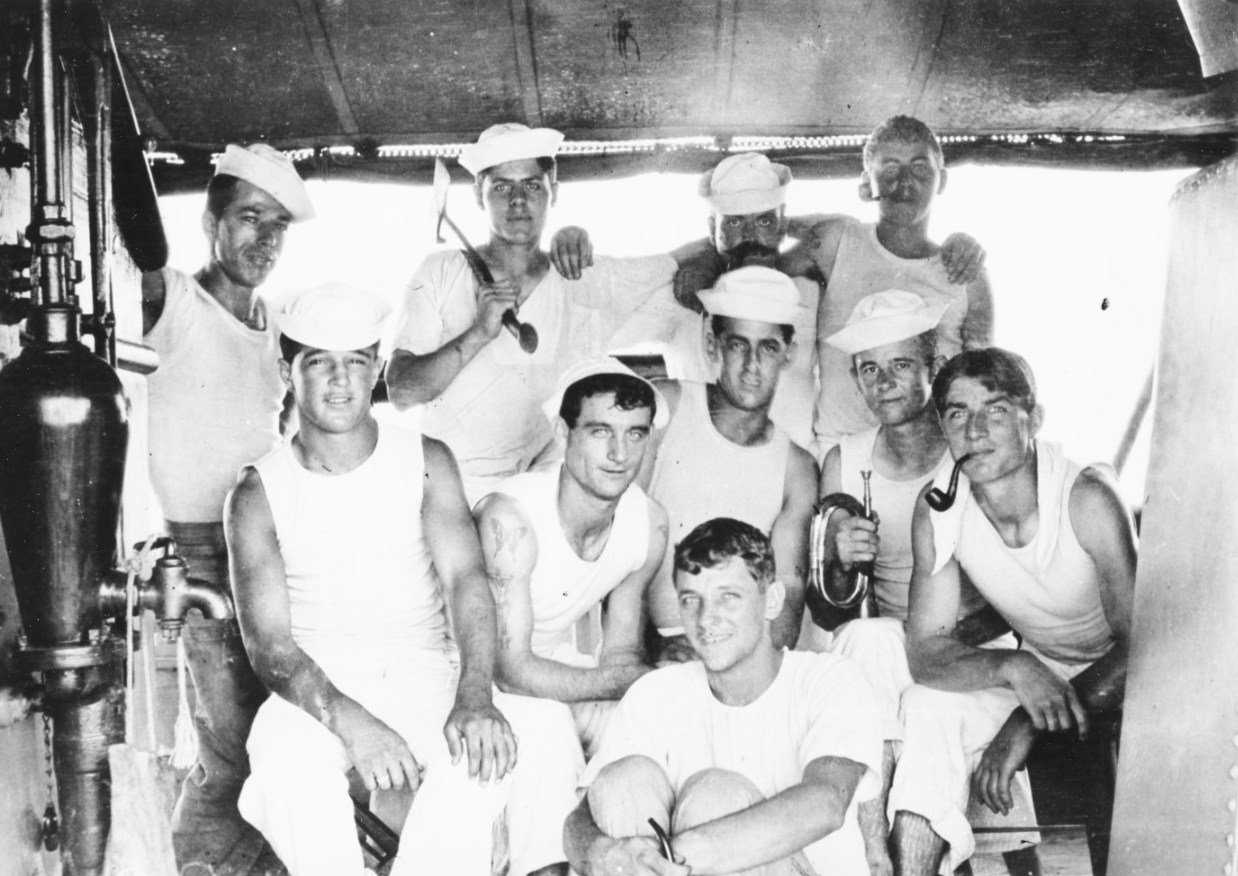 USS Villalobos (Gunboat No. 42) crewmen posing with axe, bugle, and drinking water tap (“scuttlebutt”), circa 1907–1908. Note tattoos (butterfly and crucifix) on Sailor in center. From 1903 until 1928, Villalobos served on the Navy’s China station, a fertile ground for tattoos, with the Chinese dragon motif a particular symbol of service with the Asiatic Fleet (NH 102669). 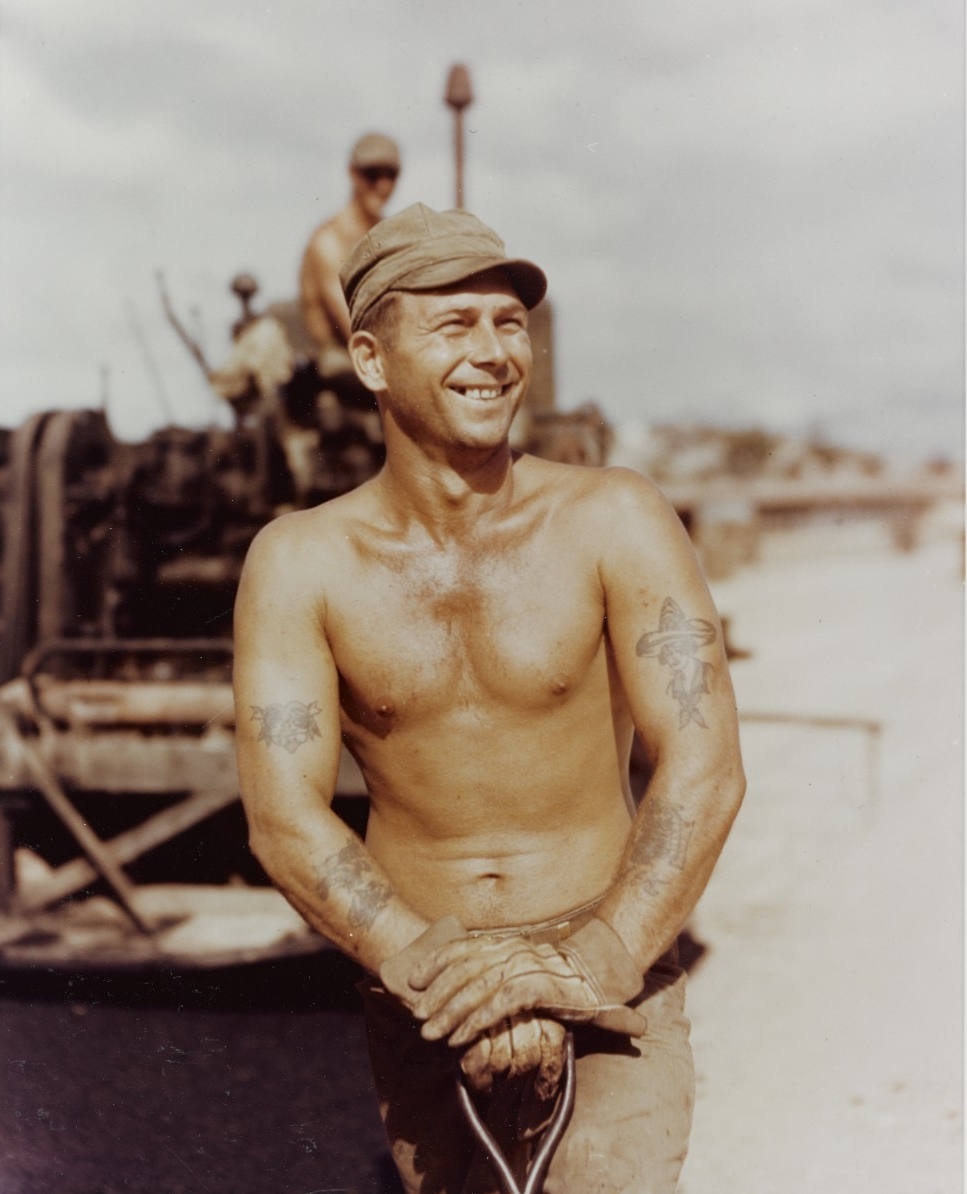 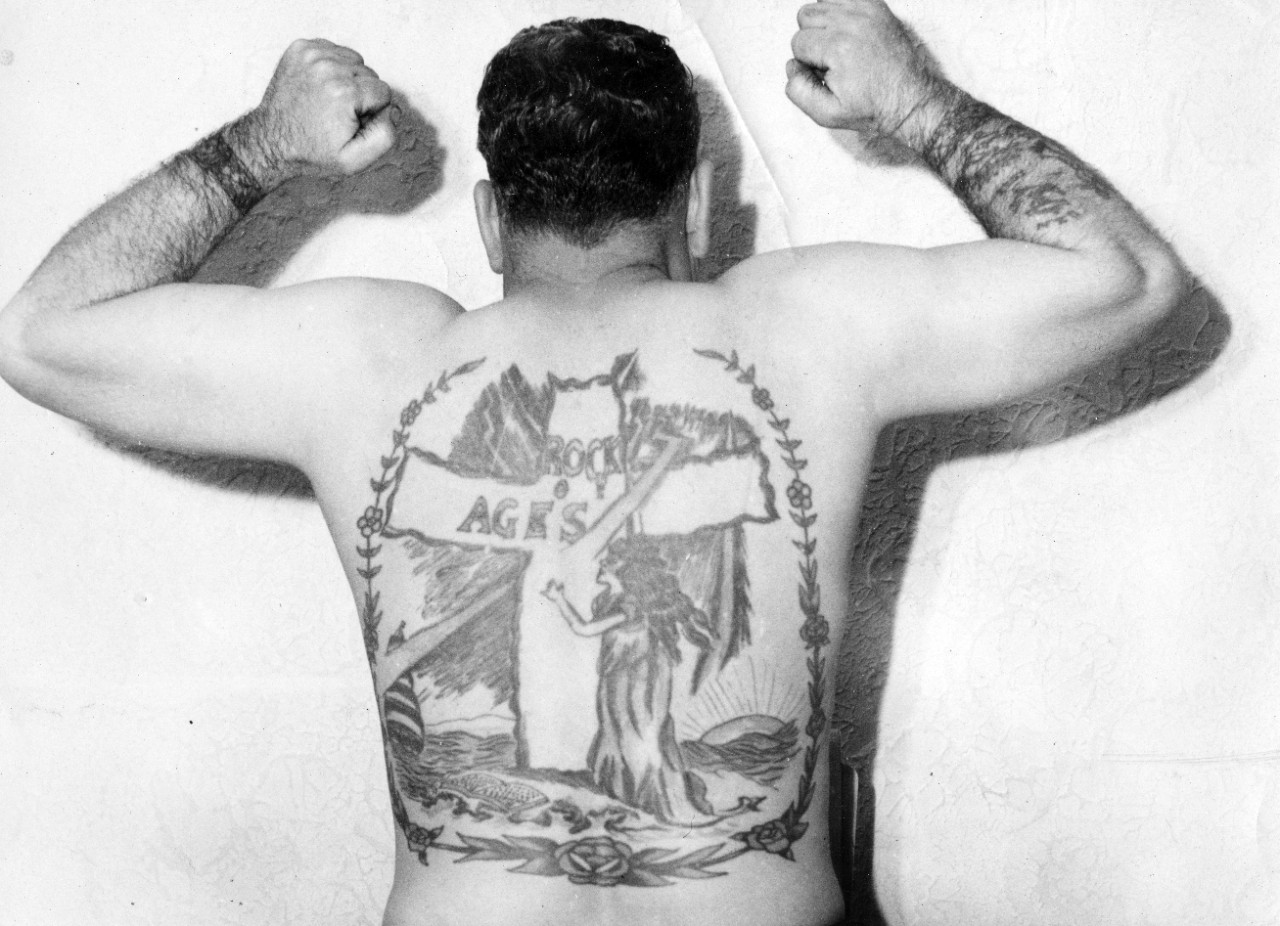 Some of the tattoos of C. A. Lushbaugh. Lushbaugh served in the Navy in the 1920s, with at least one tour on board USS Arizona (BB-39). Note the rendition of braided rope around Lushbaugh’s left wrist indicating that he is a deck seaman. The unidentifiable tattoo on his right forearm may also be Navy-specific; the large crucifix on his back with unknown initials is a personal sign of faith or talisman (UA 486.02). 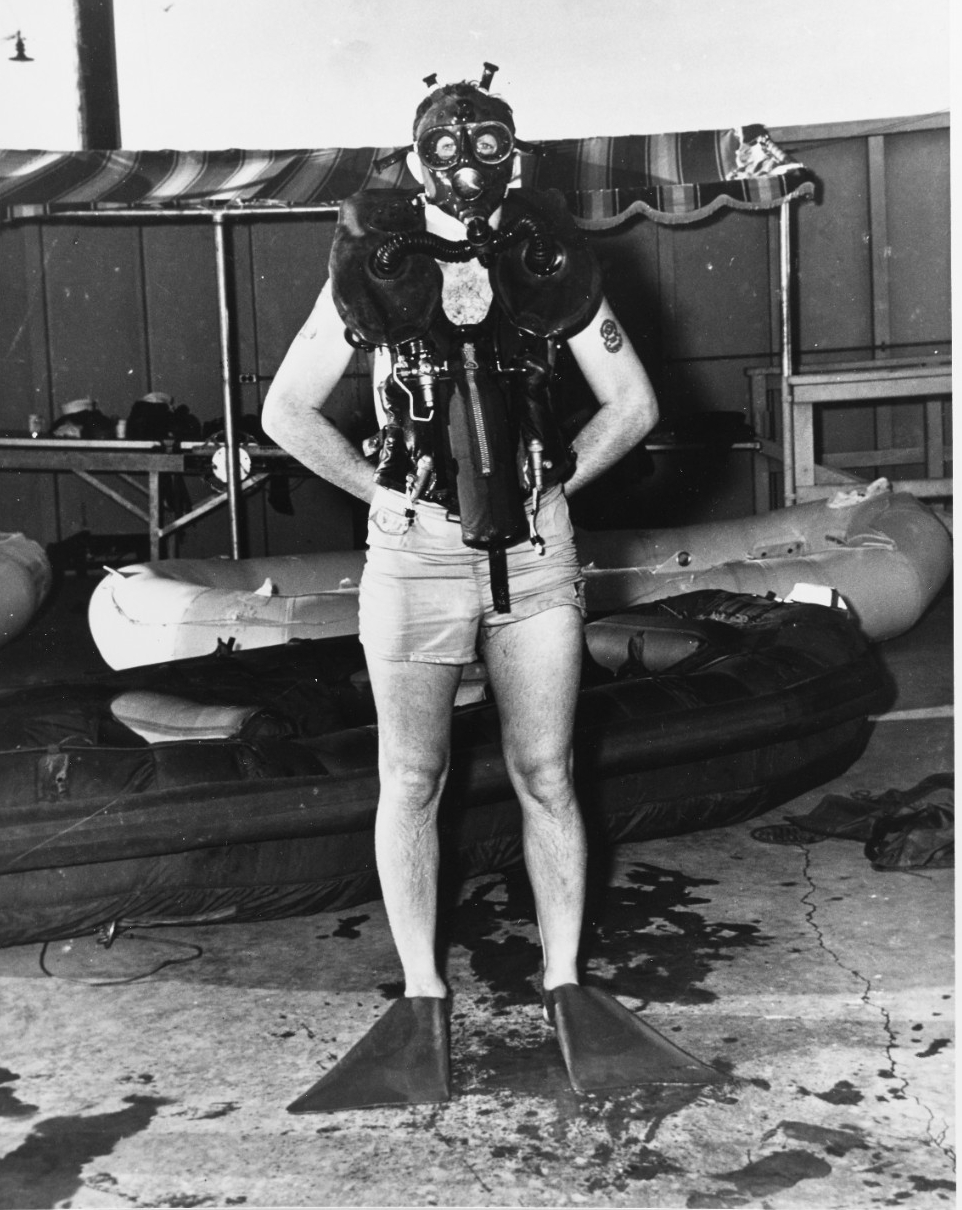 Front view of the new Lambertson Respiratory Unit during demonstrations of UDT equipment at a National Research Council Symposium, Coronado, California, 17 December 1951. Photographed at the Naval Amphibious Base. Note this man's diver tattoo, which is a rendition of the Navy qualification insignia in use at the time. Specific qualification badges or rating insignia remain popular tattoo motifs today (80-G-443227).

Anchor: Originally indicated a mariner who had crossed the Atlantic. In the present day, an anchor in one form or another may be the first nautical tattoo a young Sailor acquires (often during his or her first liberty from boot camp) and is essentially an initiation rite into the naval service.

Chinese/Asian dragon: Symbolizes luck and strength—originated in the pre–World War II Asiatic Fleet and usually indicated service in China. Much later, dragons came to symbolize WESTPAC service in general (also worn embroidered or as patches inside jumper cuffs and on cruise jackets).

Compass rose or nautical star: Worn so that a Sailor will always find his/her way back to port.

Crosses: In many variations—worn as a sign of faith or talisman. When placed on the soles of the feet, crosses were thought to repel sharks.

Dagger piercing a heart: Often combined with the motto "Death Before Dishonor"—symbolizes the end of a relationship due to unfaithfulness.

Golden Dragon: Indicated crossing the international dateline into the "realm of the golden dragon" (Asia).

“Hold Fast” or “Shipmate”: Tattooed across knuckles of both hands so that the phrases can be read from left to right by someone standing opposite. Originally thought to give a seaman a firm grip on a ship’s rigging.

Hula girl and/or palm tree: On occasion, hula girls would be rendered in a risqué fashion; both tattoos indicated service in Hawaii.

Pig and rooster: This combination—pig on top of the left foot, rooster on top of the right—was thought to prevent drowning. The superstition likely hearkens back to the age of sail, when livestock was carried onboard ship. If a ship was lost, pigs and roosters—in or on their crates—floated free.

Shellback turtle: Indicates that a Sailor has crossed the equator. “Crossing the line” is also indicated by a variety of other themes, such as fancifully rendered geo-coordinates, King Neptune, mermaids, etc.

Ships’ propellers (screws): A more extreme form of Sailors’ body art: One large propeller is tattooed on each buttock (“twin screws”) to keep the bearer afloat and propel him or her back to home and loved ones.

Sombrero: Often shown worn by a girl. May have indicated service on ships homeported in San Pedro (Terminal Island, Los Angeles) or San Diego prior to World War II, a liberty taken in Tijuana, or participation in interwar Central and South American cruises.

Swallow: Each rendition originally symbolized 5,000 nautical miles underway; swallows were and still are displayed in various poses, often in combination with a U.S. Navy–specific motif or sweetheart’s/spouse’s name. 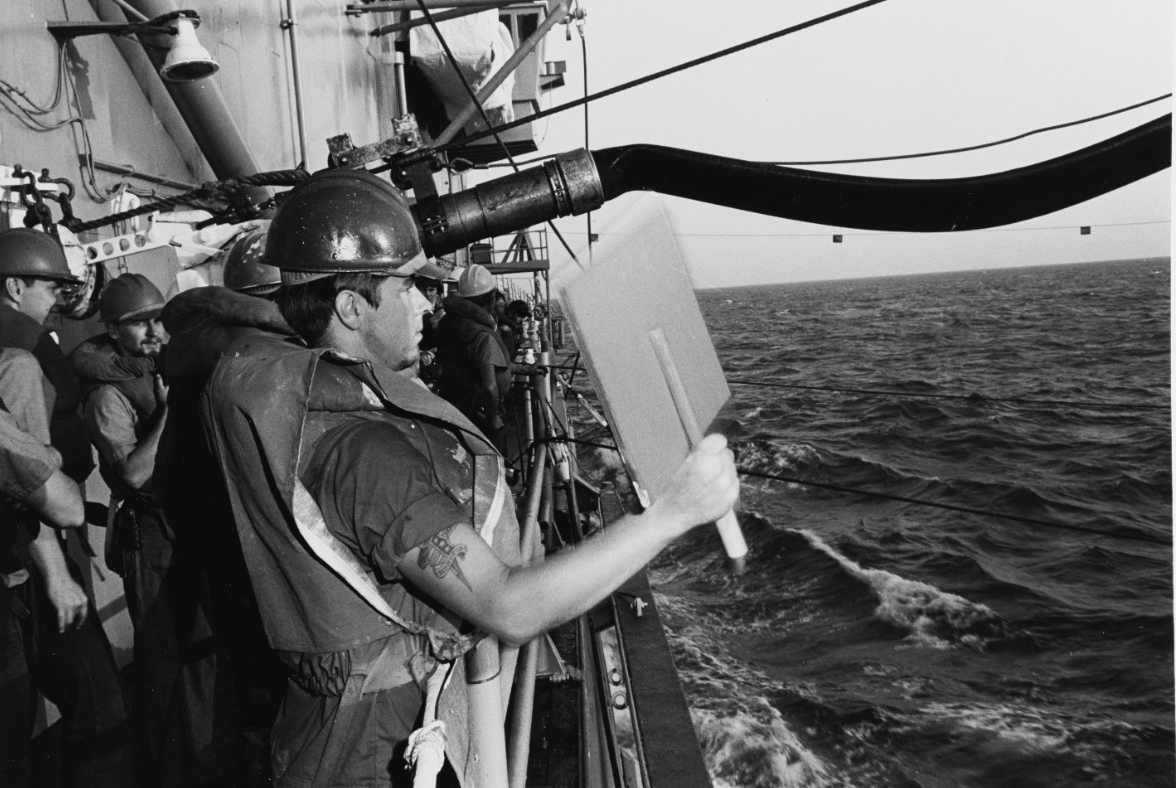 USS Little Rock (CLG-4—flagship of the U.S. Sixth Fleet) crewman signaling during underway refueling operations with USS Seattle (AOE-3) in the Mediterranean at the time of the October 1973 Middle East War. Note this Sailor's “Death Before Dishonor” tattoo. (USN 1157531).