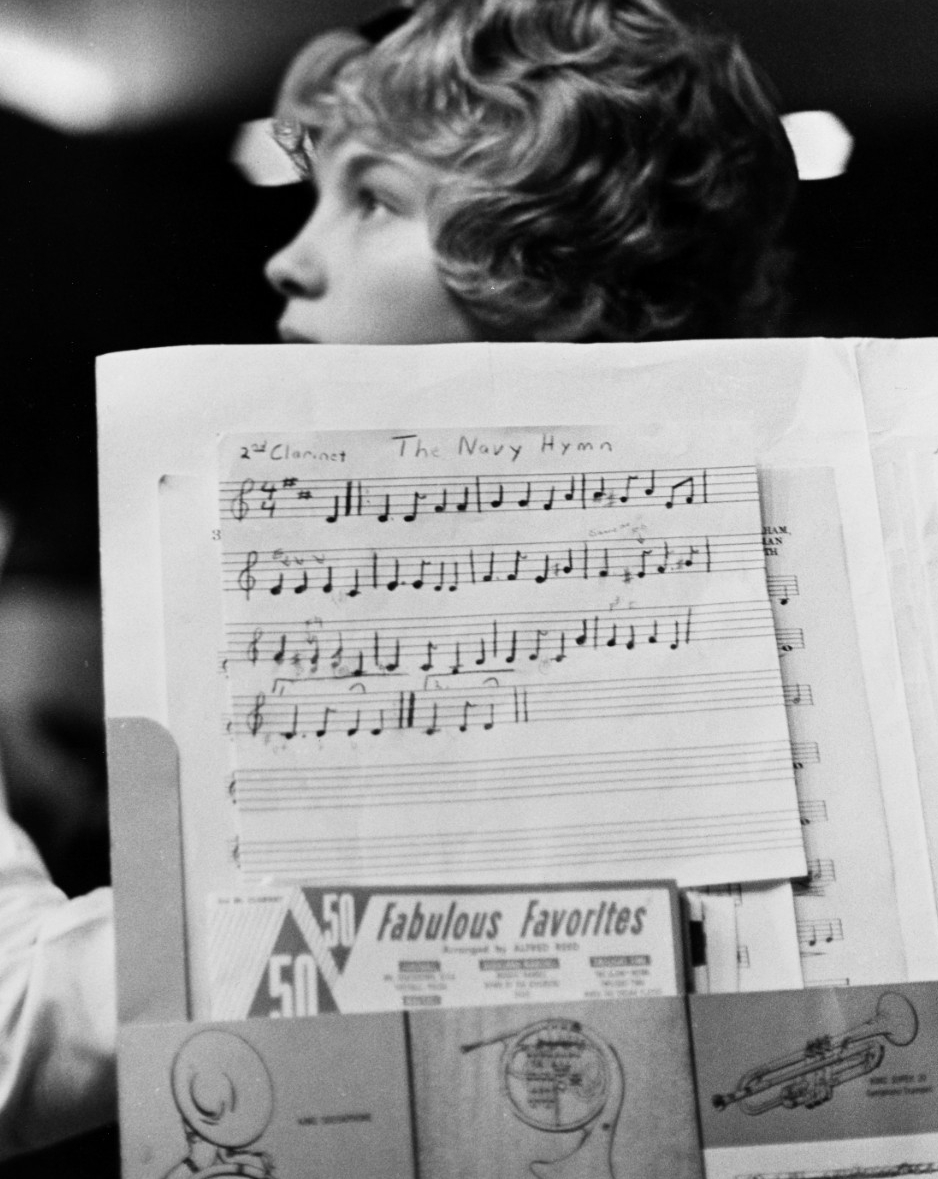 The song known to United States Navy men and women as the "Navy Hymn," is a musical benediction that long has had a special appeal to seafaring men, particularly in the American Navy and the royal navies of the British Commonwealth and which, in more recent years, has become a part of French naval tradition.

The original words were written as a hymn by a schoolmaster and clergyman of the Church of England, the Reverend William Whiting. Reverend Whiting (1825−1878) resided on the English coast near the sea and had once survived a furious storm in the Mediterranean. His experiences inspired him to pen the ode, Eternal Father, Strong to Save. In the following year, 1861, the words were adapted to music by another English clergyman, the Reverend John B. Dykes (1823−1876), who had originally written the music as Melita (ancient name for the Mediterranean island of Malta). Reverend Dykes' name may be recognized as that of the composer given credit for the music to many other well-known hymns, including Holy, Holy, Holy, Lead, Kindly Light, Jesus, Lover of My Soul, and Nearer, My God to Thee.

In the United States, in 1879 the late Rear Admiral Charles Jackson Train, an 1865 graduate of the United States Naval Academy at Annapolis, was a lieutenant commander stationed at the Academy in charge of the Midshipman Choir. In that year, Lieutenant Commander Train inaugurated the present practice of concluding each Sunday's Divine Services at the Academy with the singing of the first verse of this hymn.

The hymn, entitled Eternal Father, Strong to Save, is found in most Protestant hymnals. It can be more easily located in these hymnals by consulting the "Index to First Lines" under Eternal Father, Strong to Save. The words have been changed several times since the original hymn by Reverend Whiting was first published in 1860−61. One will find that the verses as now published differ from the original primarily in the choice of one or two words in several lines of each verse. However, inasmuch as it is not known whether the original words are now available in a hymnal, those original words are given below:

Title: Eternal Father, Strong to Save

Eternal Father, strong to save,
Whose arm hath bound the restless wave,
Who bid'st the mighty ocean deep
Its own appointed limits keep;
O hear us when we cry to thee,
for those in peril on the sea.

O Christ! Whose voice the waters heard
And hushed their raging at Thy word,
Who walked'st on the foaming deep,
and calm amidst its rage didst sleep;
Oh hear us when we cry to Thee
For those in peril on the sea!

Most Holy Spirit! Who didst brood
Upon the chaos dark and rude,
And bid its angry tumult cease,
And give, for wild confusion, peace;
Oh, hear us when we cry to Thee
For those in peril on the sea!

O Trinity of love and power!
Our brethren shield in danger's hour;
From rock and tempest, fire and foe,
Protect them wheresoe'er they go;
Thus evermore shall rise to Thee,
Glad hymns of praise from land and sea.

O Christ, the Lord of hill and plain
O'er which our traffic runs amain,
by mountain pass or valley low,
Wherever Lord thy brethren go;
Protect them by Thy guardian hand
From every peril on the land.

O Spirit, Whom the Father send
To spread abroad the Firmament;
O wind of heaven, by Thy Might,
Save all who dare the eagle's flight;
And keep them by Thy watchful care
From every peril in the air.

The Presbyterian Church, USA, likewise has added a new verse which recognizes the advent of the field of aviation. The best information available indicates that this new verse to Eternal Father, Strong to Save appeared in 1943 in a little booklet then entitled, "A book of Worship and Devotion for the Armed Forces," published by the Board of Christian Education of the Presbyterian Church, USA. All indications are that this new verse can be traced back to a completely separate hymn, Lord, Guard and Guide the Men Who Fly written by Mary C.D. Hamilton in 1915, during the First World War. From this hymn, the first verse and the last two lines to the fourth verse were taken to form this new verse to Eternal Father, Strong to Save. This new verse, as appearing in the little Presbyterian booklet, is as follows:

Apparently, during or shortly after World War II, someone in the Navy familiar with the words above adapted this verse for choral rendition. The adaptation changed a word or two here and there and substituted two new fifth and six lines. What some might call the "naval aviation version" is a follows:

Lord, guard and guide the men who fly
Through the great spaces in the sky,
Be with them always in the air,
In dark'ning storms or sunlight fair.
O, Hear us when we lift our prayer,
For those in peril in the air.

This version, together with the original first verse are the verses sung by the men and women of the Navy, particularly those in naval aviation.

The tune of Melita, to which Reverend Dykes adapted the words of Eternal Father, Strong to Save in 1861, is, of course, a very moving and inspiring melody. Research indicates that the above additions and alterations to Reverend Whiting's original ode are not the only changes that have been or will be made to the hymn. From time to time, individuals have been and will be inspired to write verses other than those which are indicated in this brief background.

Here are some current alternates:

Eternal Father, grant, we pray
To all Marines, both night and day,
The courage, honor, strength, and skill
Their land to serve, thy law fulfill;
Be thou the shield forevermore
From every peril to the Corps.
− J.E. Seim, 1966

Lord, stand beside the men who build
And give them courage, strength, and skill.
O grant them peace of heart and mind,
And comfort loved ones left behind.
Lord, hear our prayer for all Seabees,
Where'er they be on land or sea.
− R.J. Dietrich, 1960

Lord God, our power evermore,
Who arm doth reach the ocean floor,
Dive with our men beneath the sea;
Traverse the depths protectively.
O hear us when we pray, and keep
them safe from peril in the deep.
− David B. Miller, 1965

O God, protect the women who,
in service, faith in thee renew;
O guide devoted hands of skill
And bless their work within thy will;
Inspire their lives that they may be
Examples fair on land and sea.
− Lines 1-4, Merle E. Strickland, 1972,
and adapted by James D. Shannon, 1973.
Lines 5-6, Beatrice M. Truitt, 1948

Creator, Father, who dost show
Thy splendor in the ice and snow,
Bless those who toil in summer light
And through the cold Antarctic night,
As they thy frozen wonders learn;
Bless those who wait for their return.
− L.E. Vogel, 1965

Eternal Father, Lord of hosts,
Watch o'er the men who guard our coasts.
Protect them from the raging seas
And give them light and life and peace.
Grant them from thy great throne above
The shield and shelter of thy love.
− Author and date unknown

Eternal Father, King of birth,
Who didst create the heaven and earth,
And bid the planets and the sun
Their own appointed orbits run;
O hear us when we seek they grace
For those who soar through outer space.
− J.E. Volonte, 1961

Creator, Father, who first breathed
In us the life that we received,
By power of they breath restore
The ill, and men with wounds of war.
Bless those who give their healing care,
That life and laughter all may share
− Galen H. Meyer, 1969
Adapted by James D. Shannon, 1970

God, who dost still the restless foam,
Protect the ones we love at home.
Provide that they should always be
By thine own grace both safe and free.
O Father, hear us when we pray
For those we love so far away.
− Hugh Taylor, date unknown

Lord, guard and guide the men who fly
And those who on the ocean ply;
Be with our troops upon the land,
And all who for their country stand:
Be with these guardians day and night
And may their trust be in they might.
− author unknown, about 1955

O Father, King of earth and sea,
We dedicate this ship to thee.
In faith we send her on her way;
In faith to thee we humbly pray:
O hear from heaven our sailor's cry
And watch and guard her from on high!
− Author and date unknown

And when at length her course is run,
Her work for home and country done,
Of all the souls that in her sailed
Let not one life in thee have failed;
But hear from heaven our sailor's cry,
And grant eternal life on high!
− Author and date unknown

Text extracted from a publication of the Bureau of Naval Personnel

This hymn is often used at funerals for personnel who served in or were associated with the Navy. Eternal Father was the favorite hymn of President Franklin D. Roosevelt and was sung at his funeral at Hyde Park, New York, in April 1945. Roosevelt had served as Secretary of the Navy. This hymn was also played as President John F. Kennedy's body was carried up the steps of the Capitol to lie in state.

Anchors Aweigh is the official fight song of the U.S. Naval Academy and is often heard at U.S. Navy events. The music was composed in 1906 by then-Lieutenant Charles Zimmermann, bandmaster of the United States Naval Academy Band. The lyrics were written by Midshipman First Class Alfred Hart Miles, USNA class of 1907. 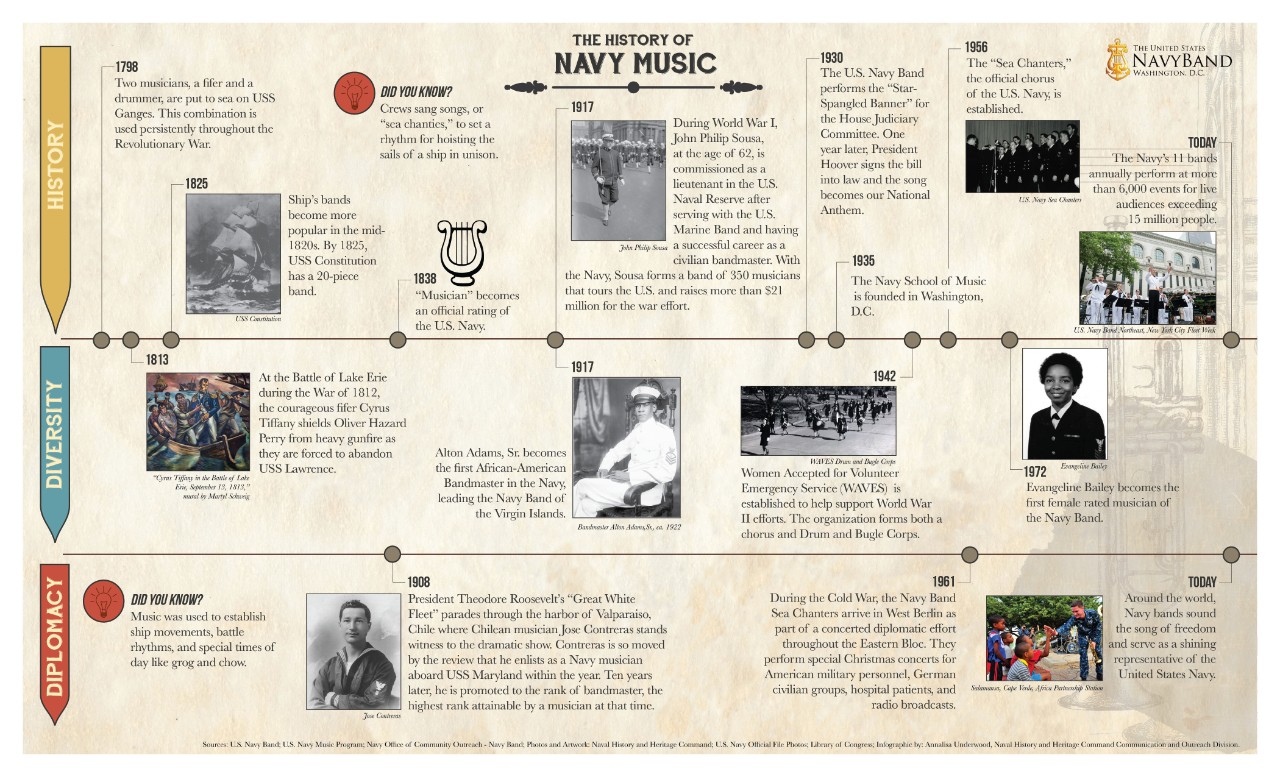 Navy Music has a rich history that dates back more than 200 years. This infographic represents some of the highlights of Navy Music that helped shape the program into what it is today. 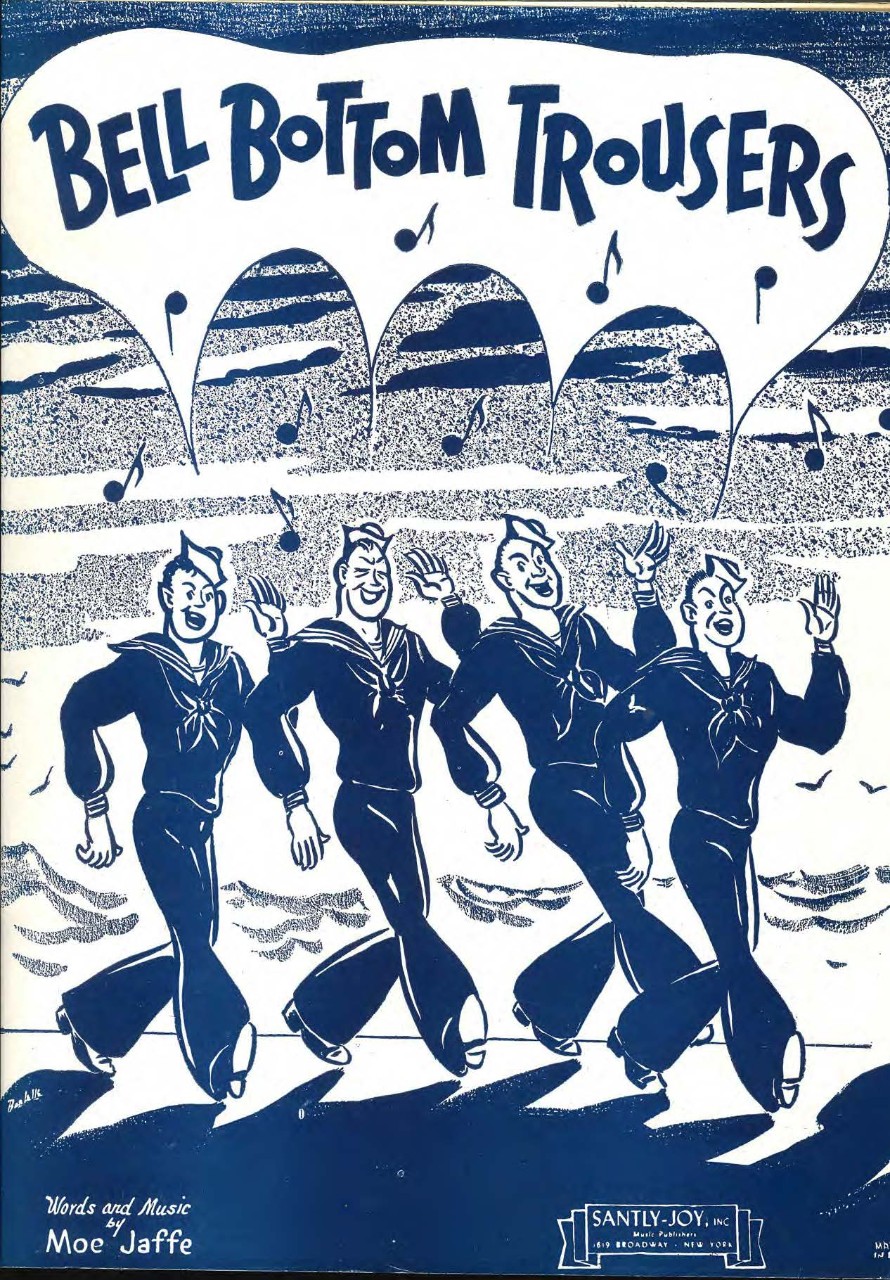 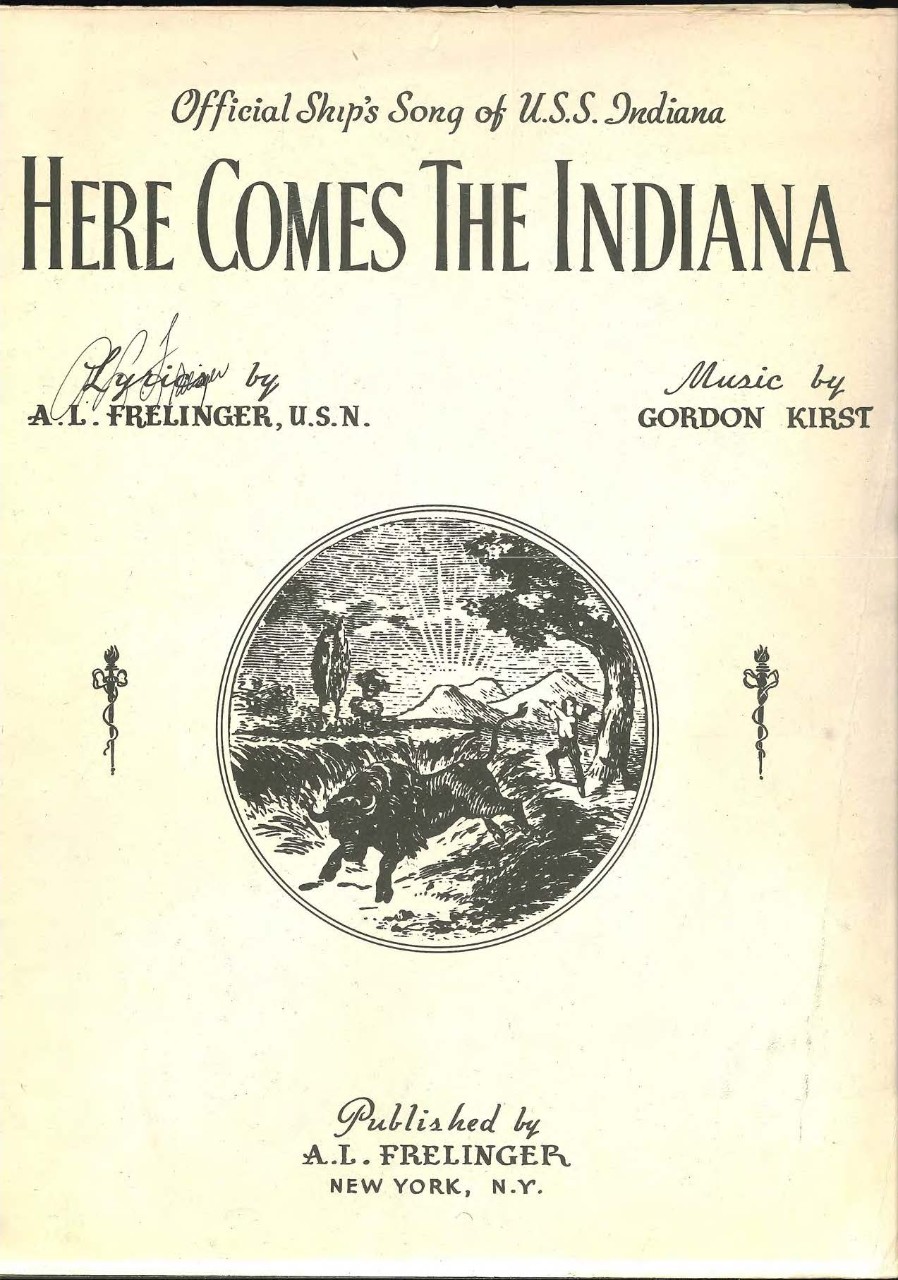 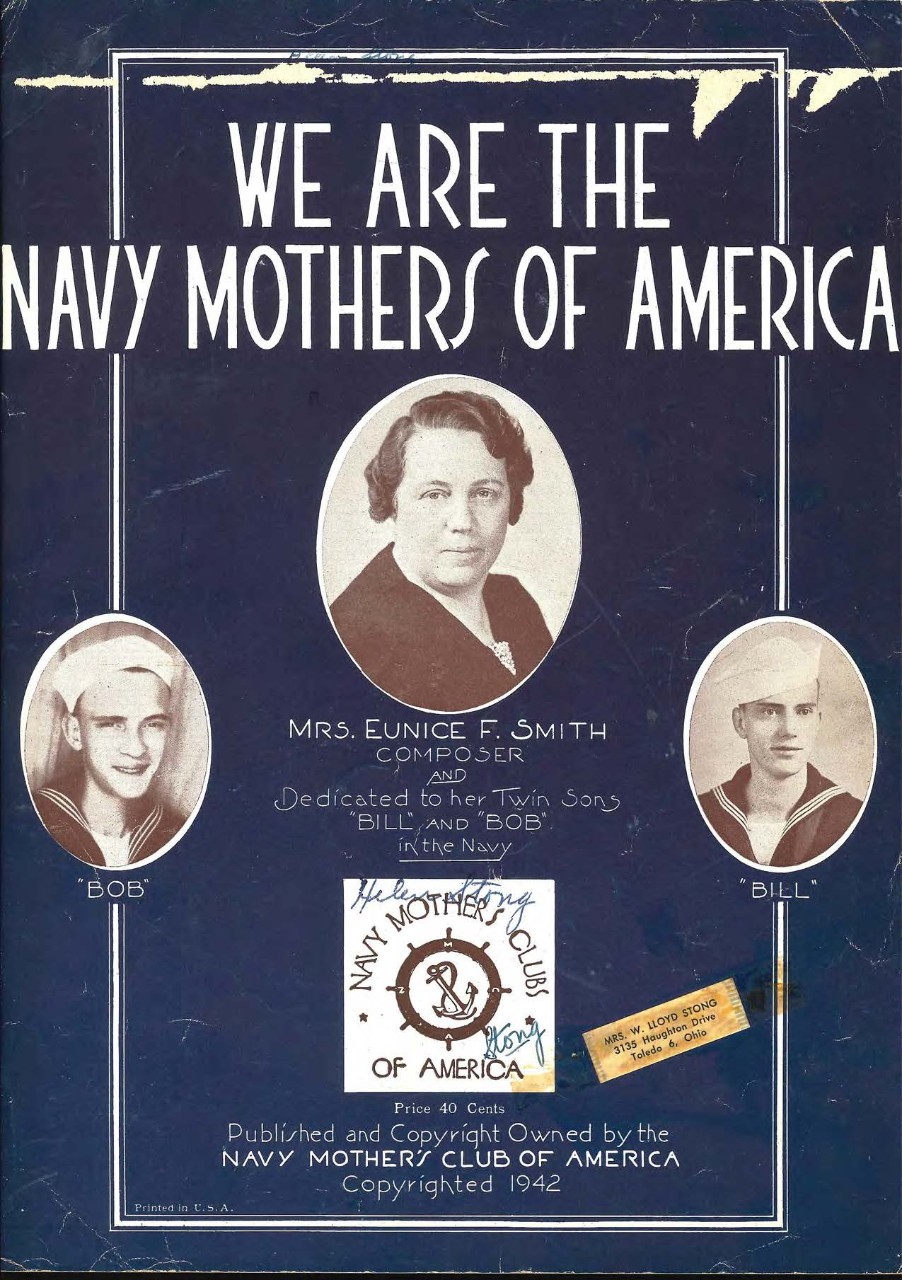 Sheet music for We are the Navy Mothers of America, released in 1942. Composed by Mrs. Eunice F. Smith and dedicated to her twin sons "Bill" and "Bob" in the Navy. Published by Navy Mother's Club of America. Click to download pdf (878 KB). 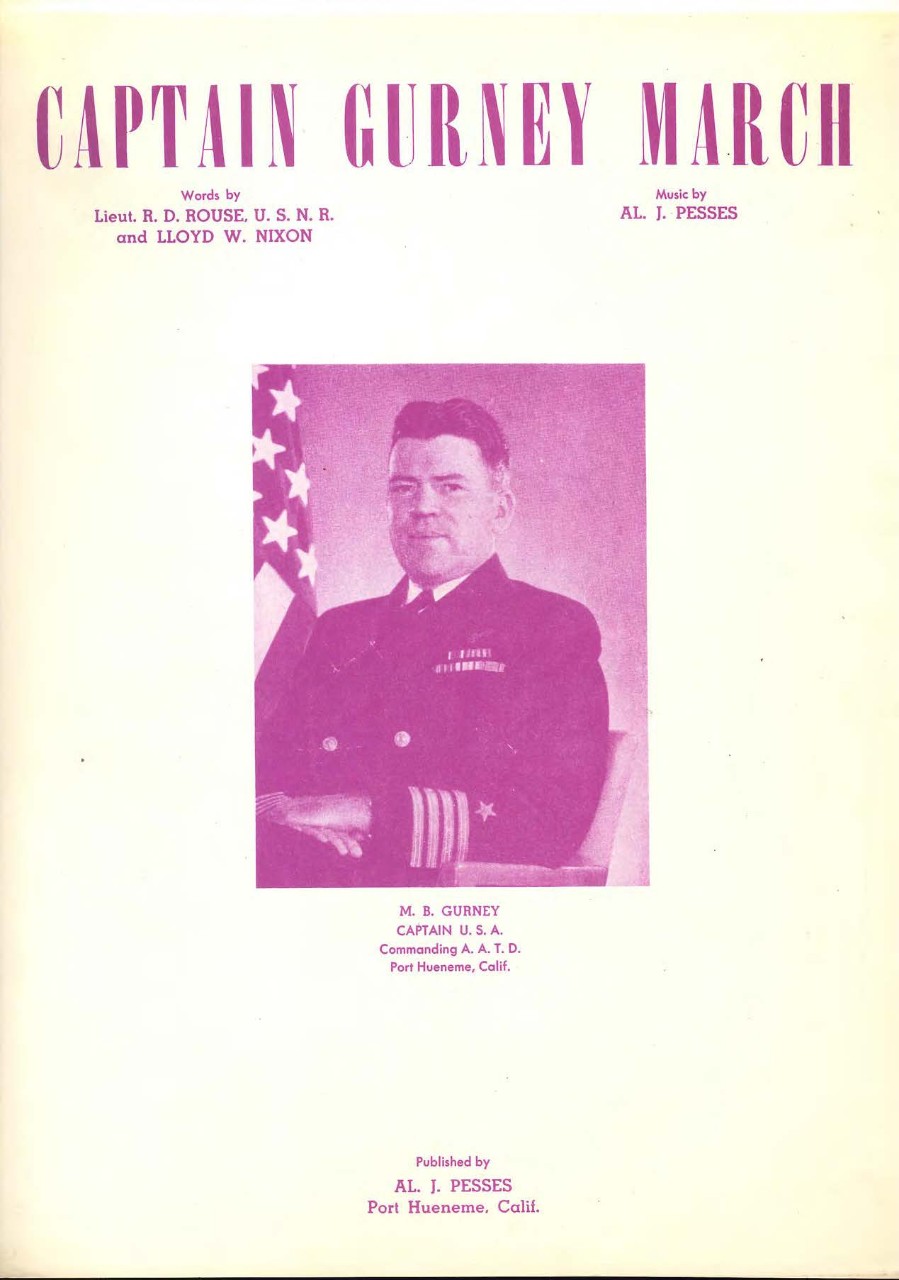 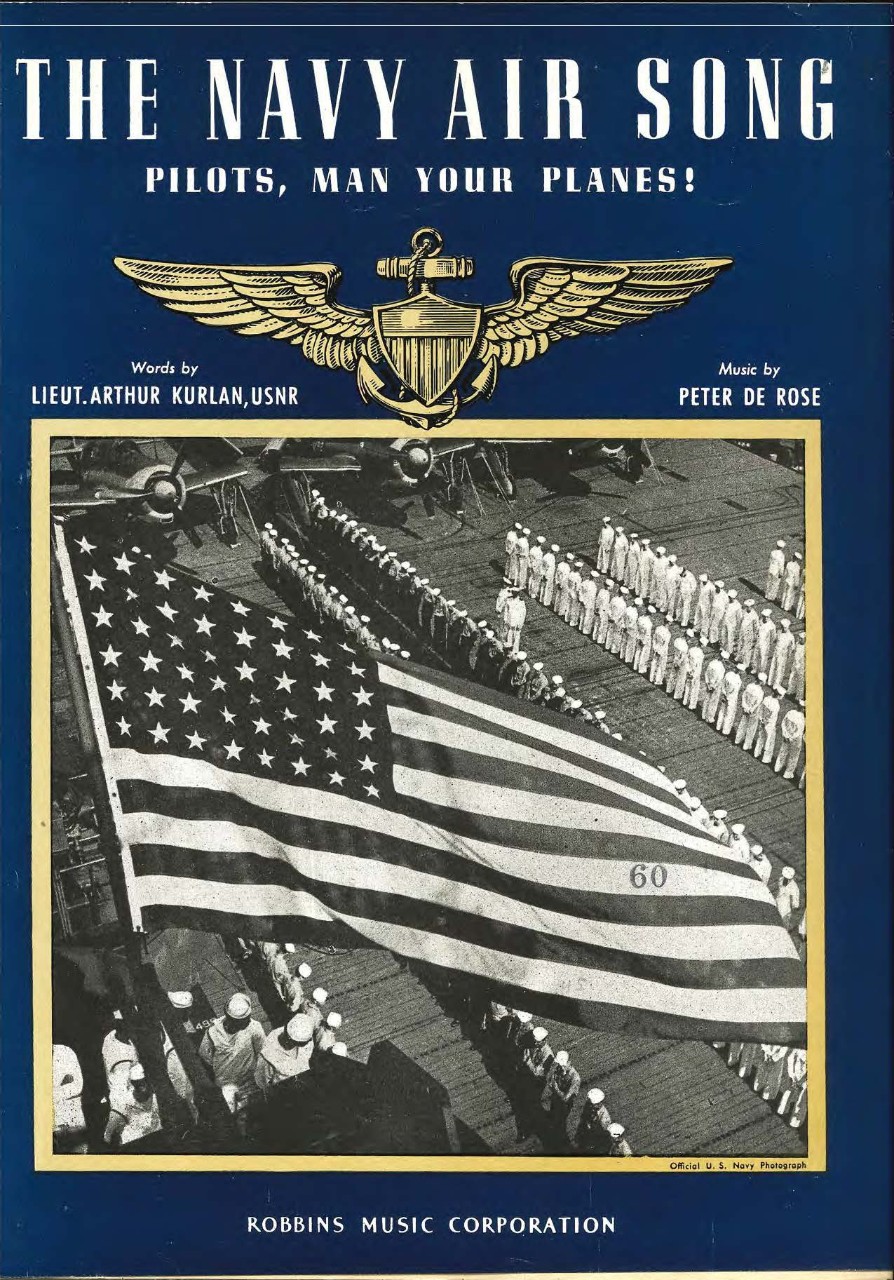 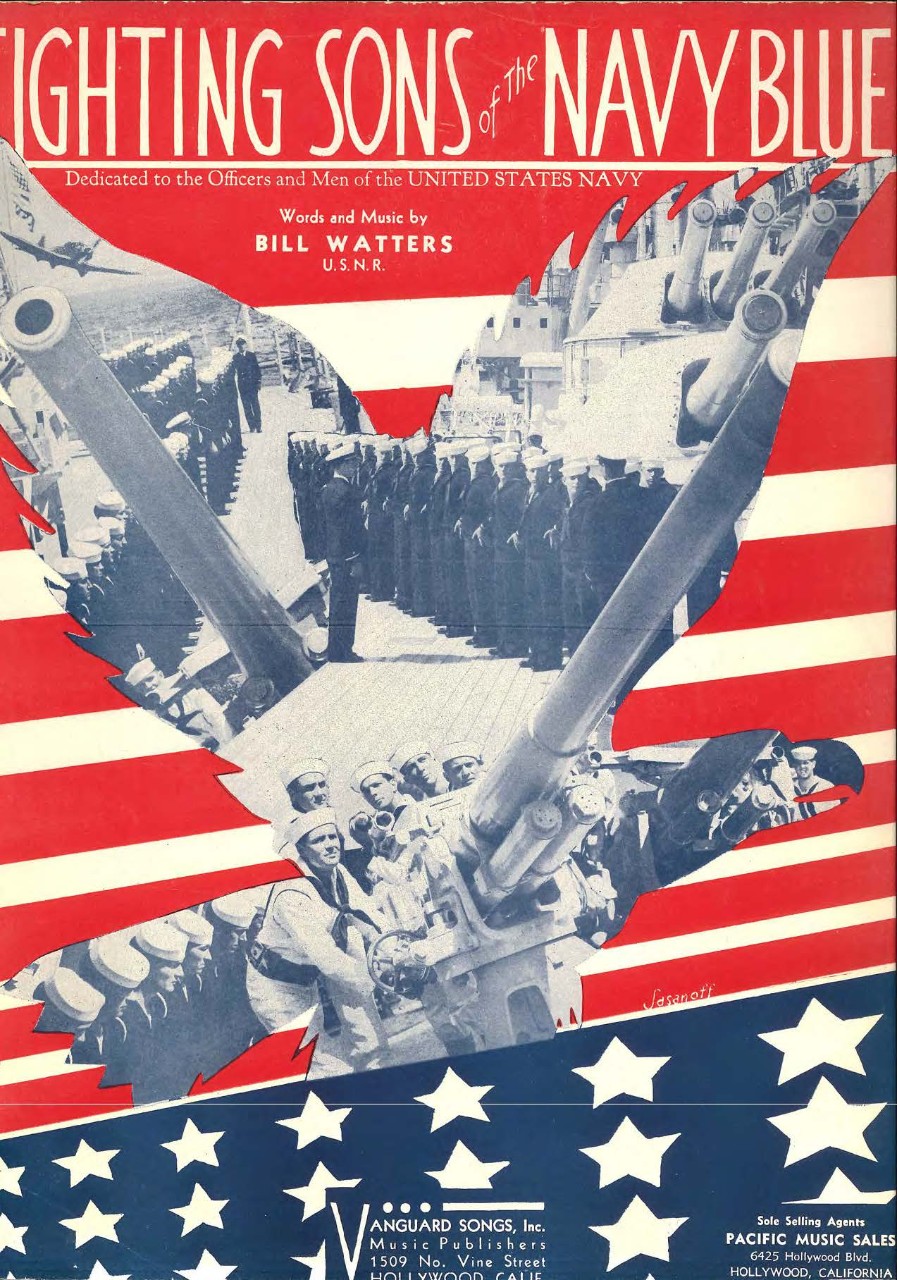 Sheet music for Fighting Sons of the Navy Blue, released in 1942. Words and music by Bill Watters U.S.N.R. Click to download pdf (1.7 MB). 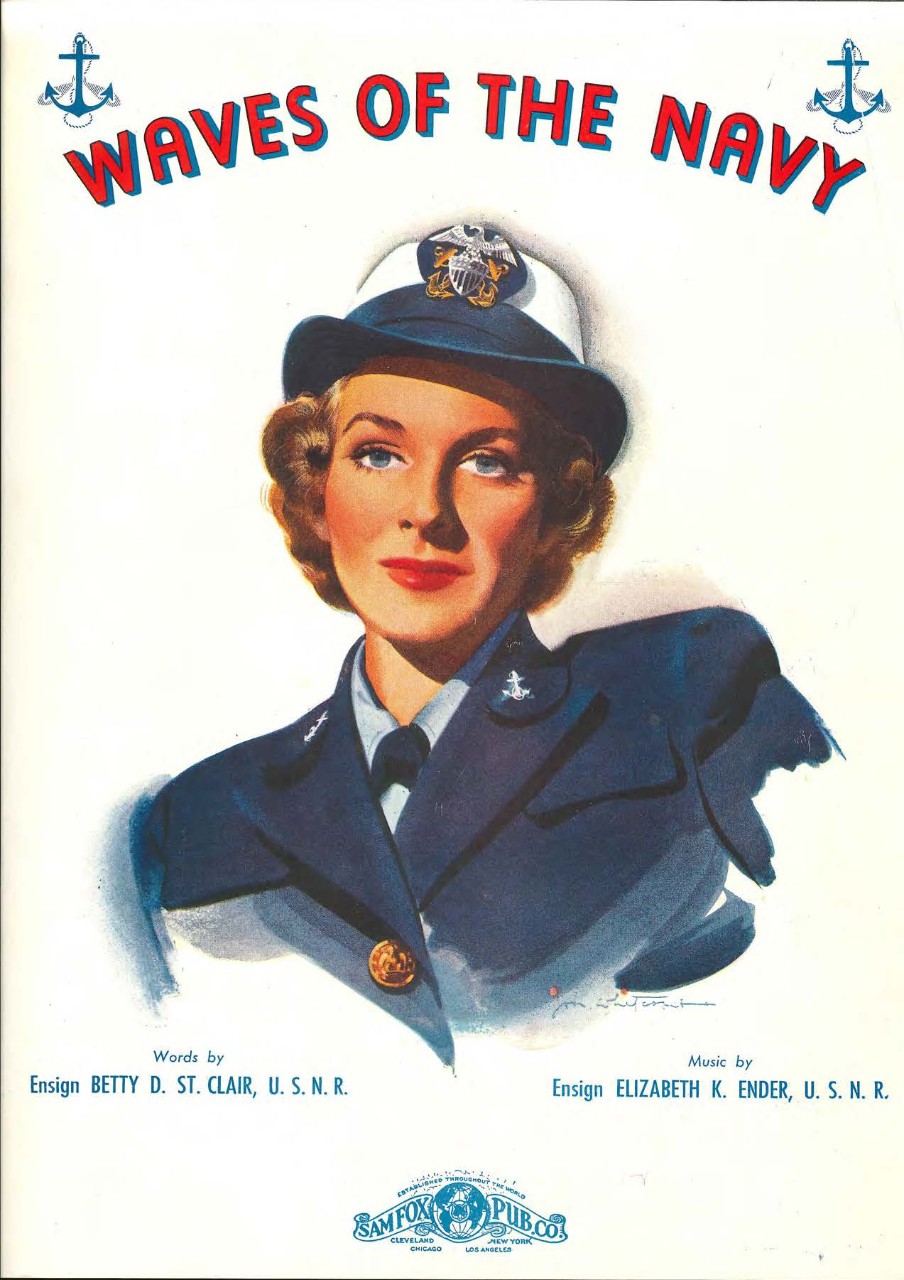 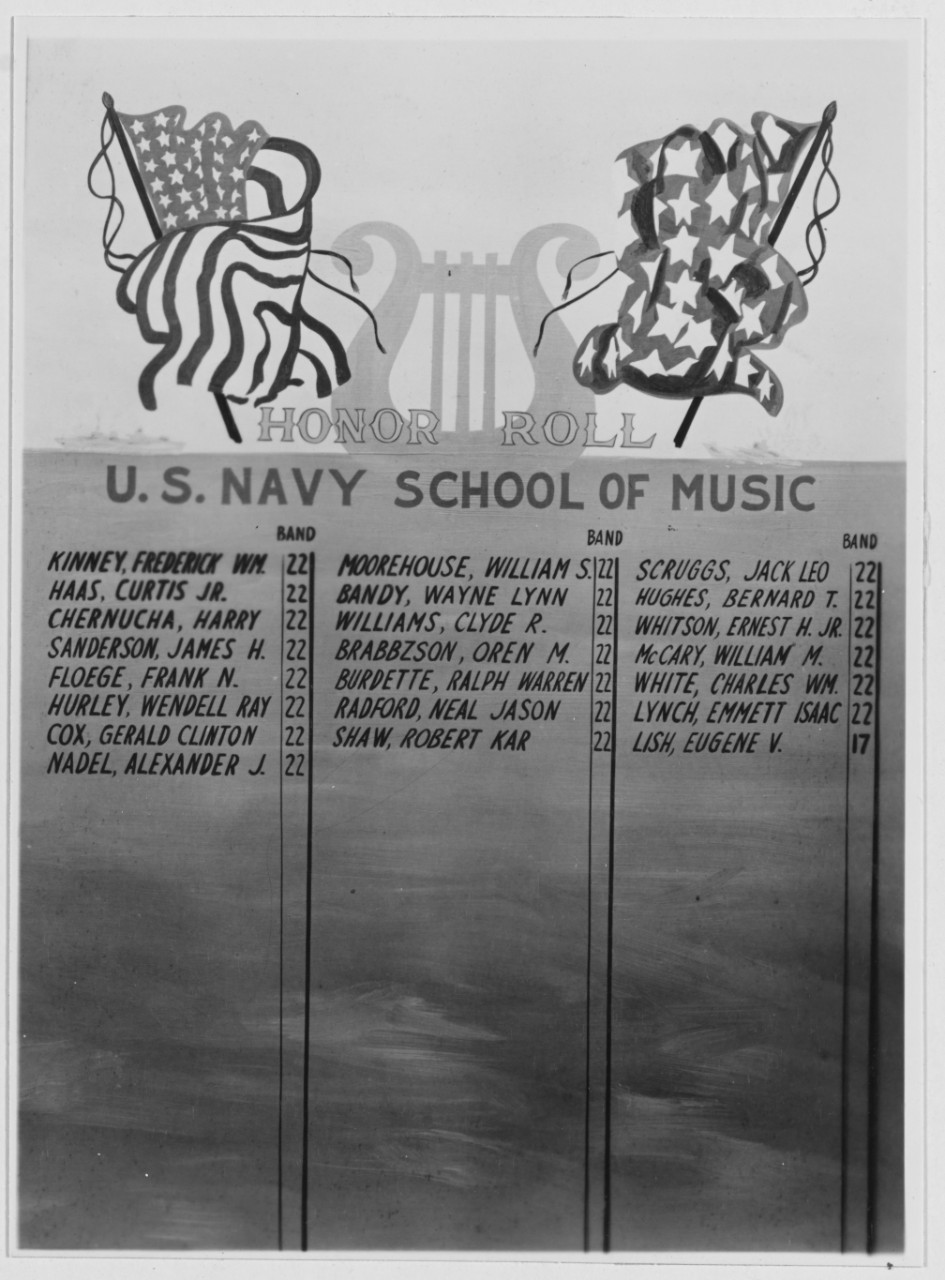 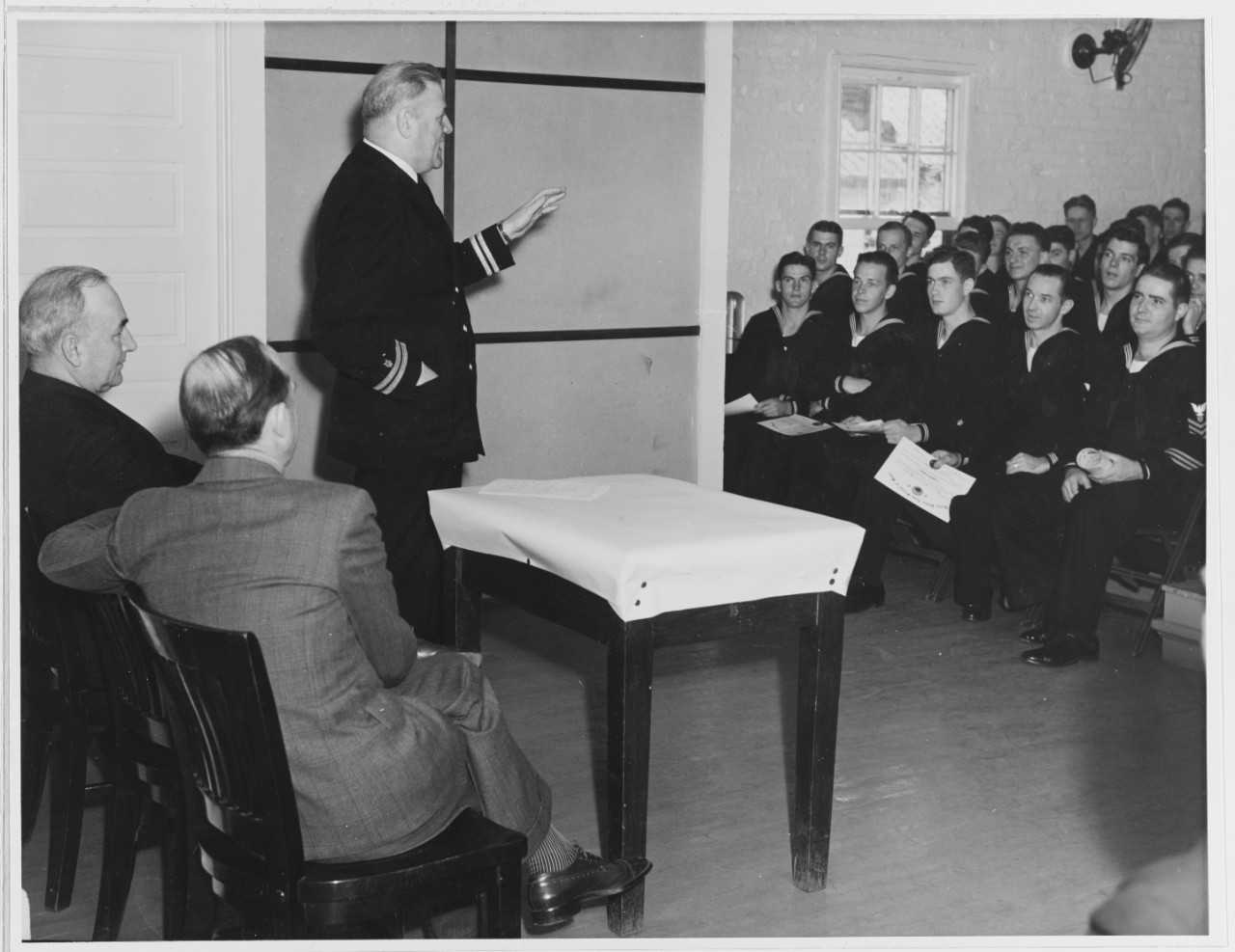 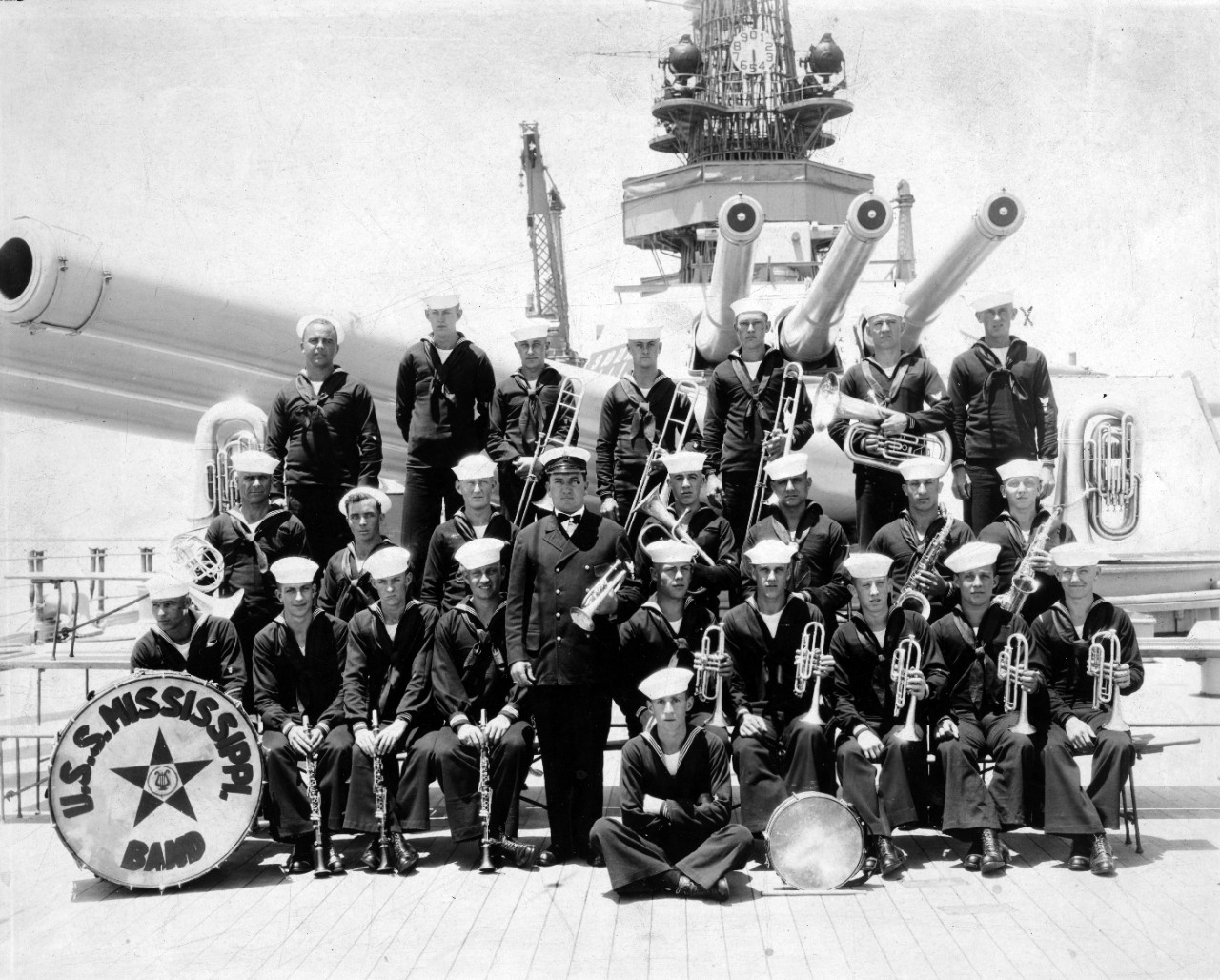 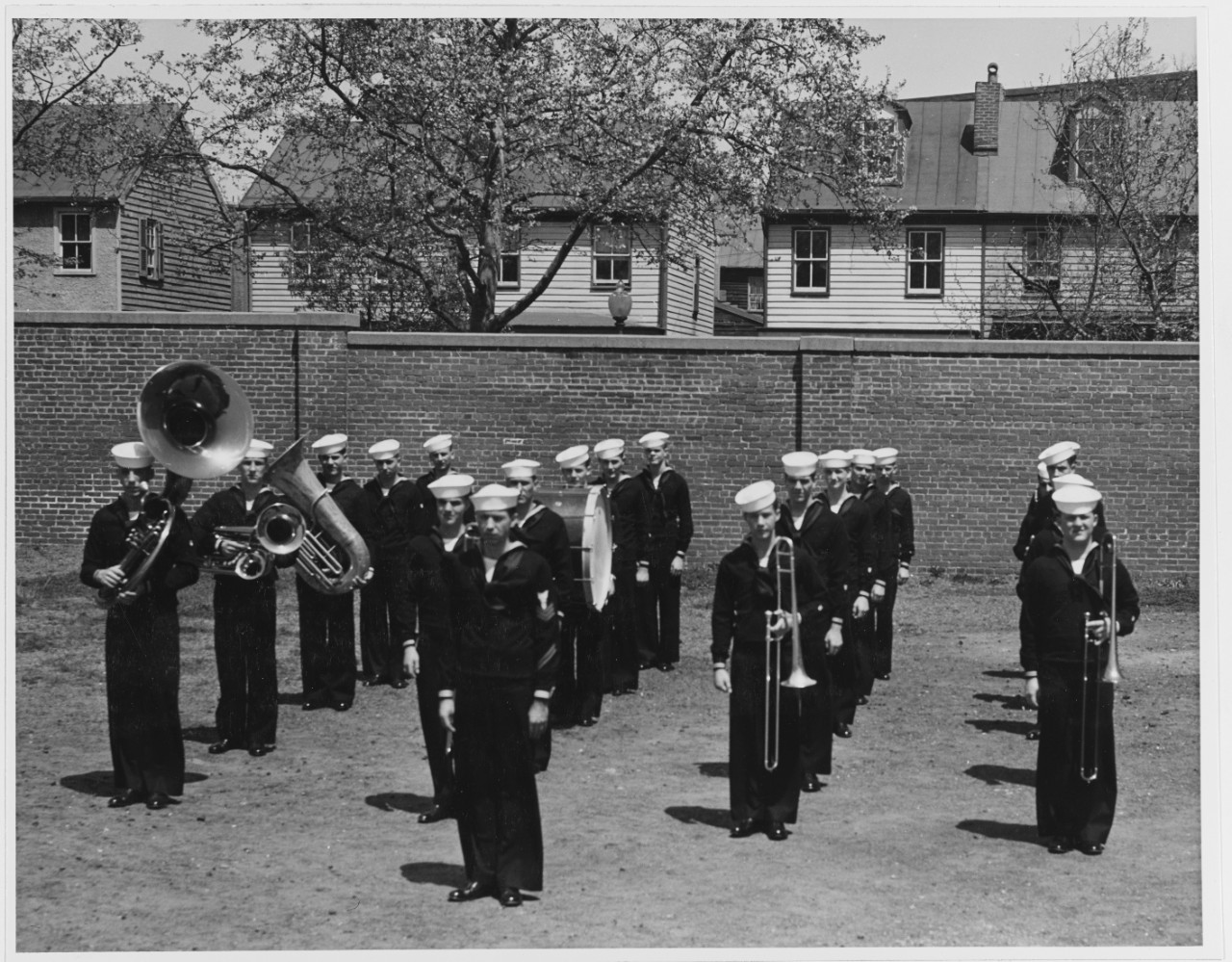 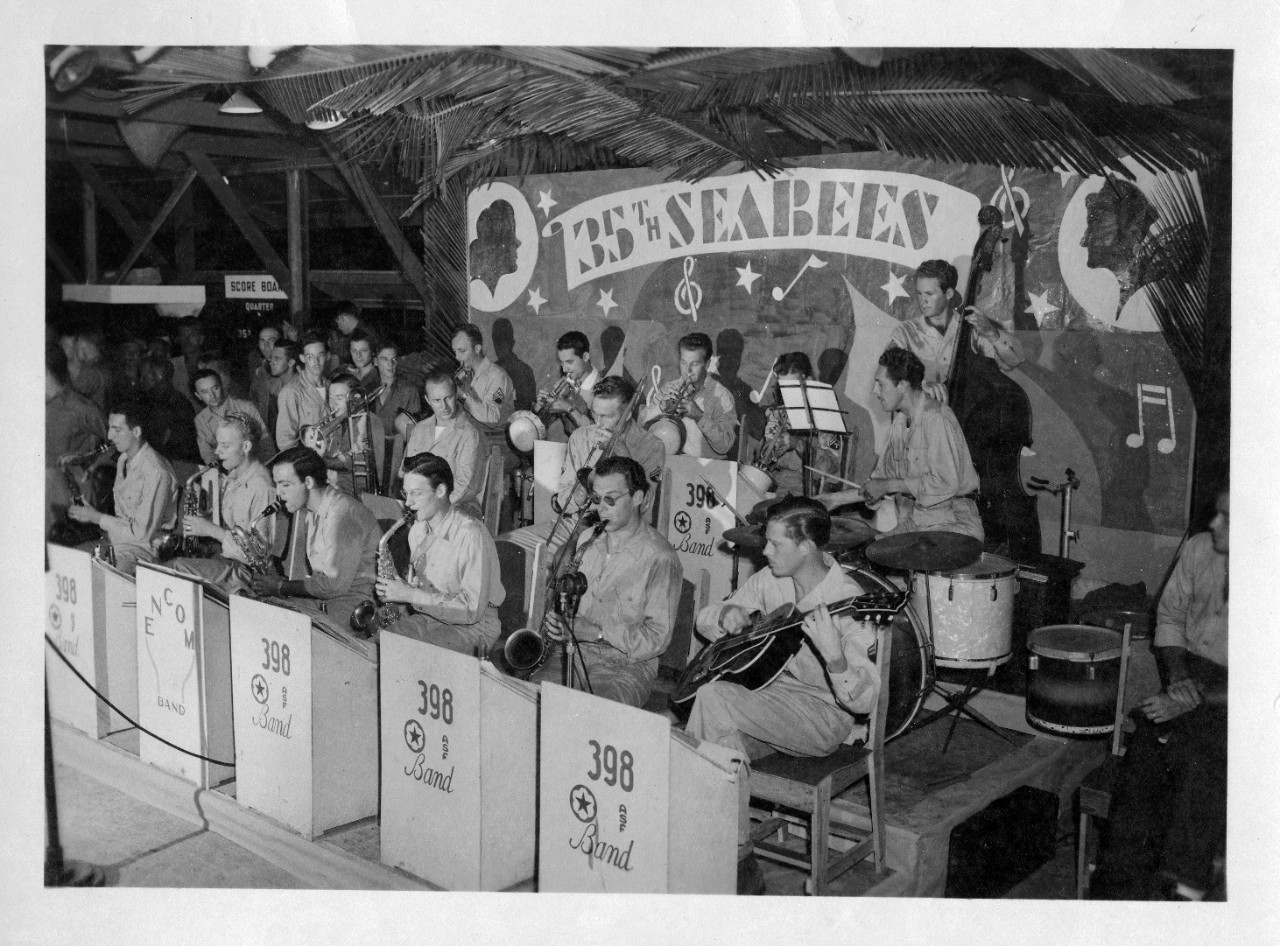 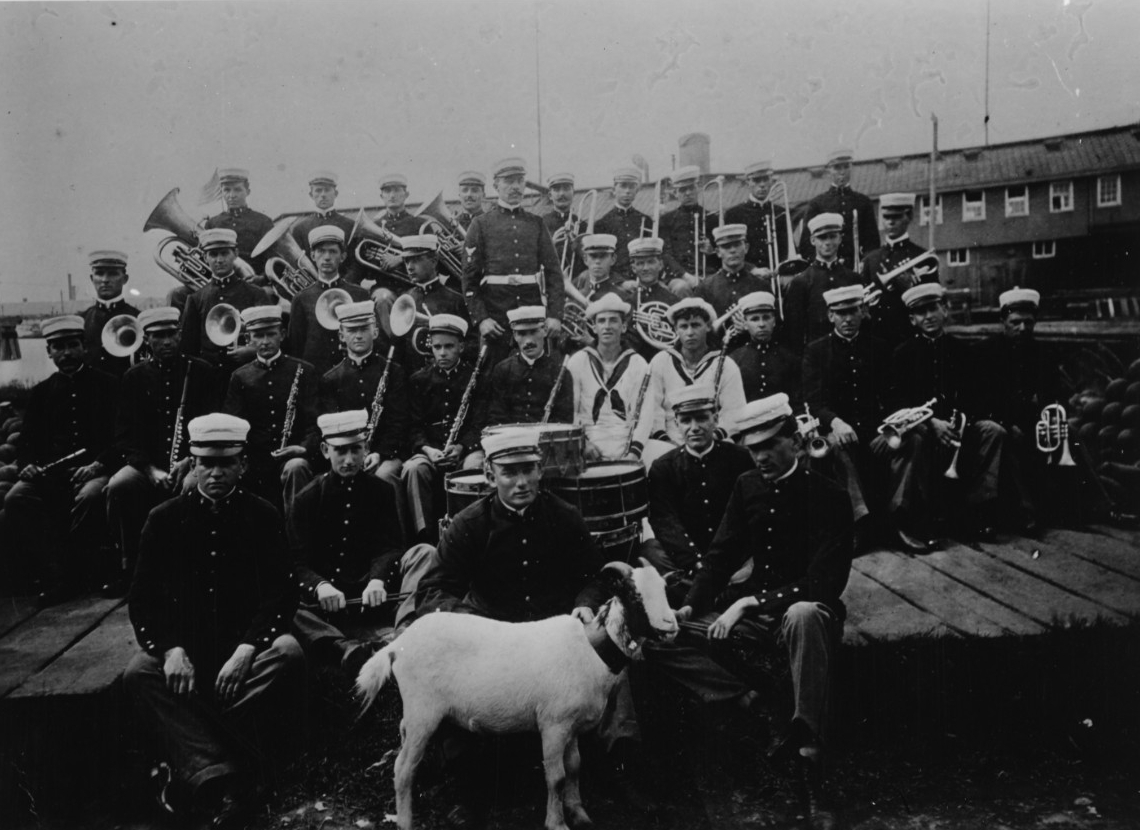 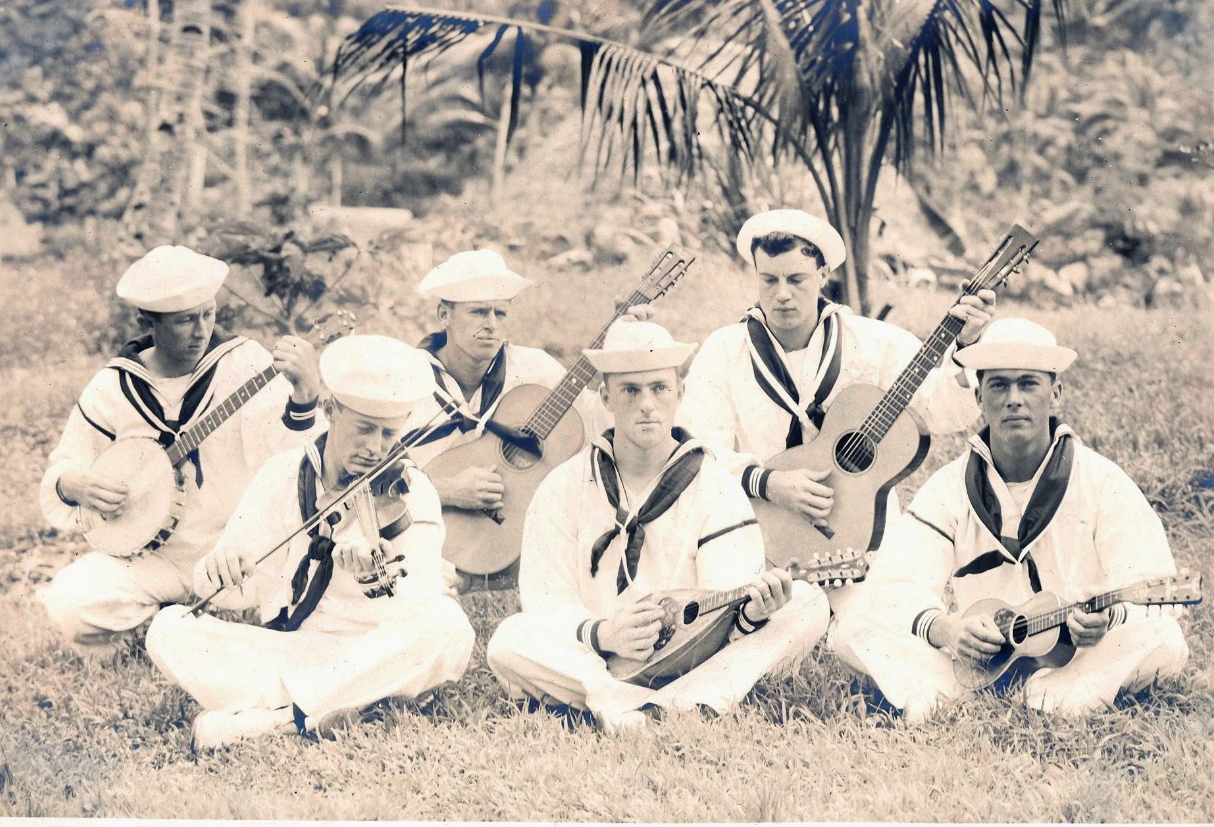