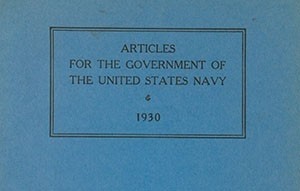 “Rocks and Shoals” is an informal reference to the Articles for the Government of the United States Navy, which was replaced in 1951 by the Uniform Code of Military Justice. The nickname derives from a reference to “rocks and shoals” in Article 4, Section 10, of the document:

“The punishment of death, or such other punishment as a court martial may adjudge, may be inflicted on any person in the naval service...[who] intentionally or willfully suffers any vessel of the Navy to be stranded, or run upon rocks or shoals, or improperly hazarded or maliciously or willfully injures any vessel of the Navy, or any part of her tackle, armament, or equipment, whereby the safety the vessel is hazarded or the lives of the crew exposed to danger.”

Rocks and Shoals was also used as the title of the reunion publication for USS Memphis (Armored Cruiser No. 10) survivors, published between 1960 and 1980.

“Rocks and Shoals,” by Captain Donald I. Thomas USN (Ret.)