"Any man who may be asked in this century what he did to make his life worthwhile, I think can respond with a good deal of pride and satisfaction, 'I served in the United States Navy,'" wrote President John F. Kennedy in August 1963. A former naval officer, Kennedy was born in Brookline, Massachusetts on 29 May 1917 to Rose and Joseph P. Kennedy. After attending public schools in Brookline, Kennedy went on to The Choate School in Wallingford, Connecticut, and attended the London School of Economics from 1935 to 1936. Kennedy graduated cum laude from Harvard University in 1940 and began graduate school at Stanford University.

Despite having a bad back, Kennedy was able to join the U.S. Navy through the help of Captain Alan Kirk, the Director, Office of Naval Intelligence (ONI) who had been the Naval Attache in London when Joseph Kennedy was the Ambassador. In October 1941, Kennedy was appointed an Ensign in the U.S. Naval Reserve and joined the staff of the Office of Naval Intelligence. The office, for which Kennedy worked, prepared intelligence bulletins and briefing information for the Secretary of the Navy and other top officials. On 15 January 1942, he was assigned to an ONI field office the Sixth Naval District in Charleston, South Carolina. After spending most of April and May at Naval Hospitals at Charleston and at Chelsea, Massachusetts, Kennedy attended Naval Reserve Officers Training School at Northwestern University in Chicago, Illinois, from 27 July through 27 September. After completing this training, Kennedy entered the Motor Torpedo Boat Squadron Training Center, Melville, Rhode Island. On 10 October, he was promoted to the rank of Lieutenant, Junior Grade. Upon completing his training 2 December, he was ordered to the training squadron, Motor Torpedo Squadron FOUR, for duty as the Commanding Officer of a motor torpedo boat, PT 101, a 78- foot Higgins boat. In January 1943, PT 101 with four other boats was ordered to Motor Torpedo Boat Squadron FOURTEEN, which was assigned to Panama.

Seeking combat duty, Kennedy transferred on 23 February as a replacement officer to Motor Torpedo Boat Squadron TWO, which was based at Tulagi Island in the Solomons. Traveling to the Pacific on USS Rochambeau , Kennedy arrived at Tulagi on 14 April and took command of PT 109 on 23 April 1943. On 30 May, several PT boats, including PT 109 were ordered to the Russell Islands, in preparation for the invasion of New Georgia. After the invasion of Rendova, PT 109 moved to Lumbari. From that base PT boats conducted nightly operations to interdict the heavy Japanese barge traffic resupplying the Japanese garrisons in New Georgia and to patrol the Ferguson and Blackett Straits near the islands of Kolumbangara, Gizo, and Vella-Lavella in order to sight and to give warning when the Japanese Tokyo Express warships came into the straits to assault U.S. forces in the New Georgia-Rendova area.

PT 109 commanded by Kennedy with executive officer, Ensign Leonard Jay Thom, and ten enlisted men was one of the fifteen boats sent out on patrol on the night of 1-2 August 1943 to intercept Japanese warships in the straits. A friend of Kennedy, Ensign George H. R. Ross, whose ship was damaged, joined Kennedy's crew that night. The PT boat was creeping along to keep the wake and noise to a minimum in order to avoid detection. Around 0200 with Kennedy at the helm, the Japanese destroyer Amagiri traveling at 40 knots cut PT 109 in two in ten seconds. Although the Japanese destroyer had not realized that their ship had struck an enemy vessel, the damage to PT 109 was severe. At the impact, Kennedy was thrown into the cockpit where he landed on his bad back. As Amagiri steamed away, its wake doused the flames on the floating section of PT 109 to which five Americans clung: Kennedy, Thom, and three enlisted men, S1/c Raymond Albert, RM2/c John E. Maguire and QM3/c Edman Edgar Mauer. Kennedy yelled out for others in the water and heard the replies of Ross and five members of the crew, two of which were injured. GM3/c Charles A. Harris had a hurt leg and MoMM1/c Patrick Henry McMahon, the engineer was badly burned. Kennedy swam to these men as Ross and Thom helped the others, MoMM2/c William Johnston, TM2/c Ray L. Starkey, and MoMM1/c Gerald E. Zinser to the remnant of PT 109. Although they were only one hundred yards from the floating piece, in the dark it took Kennedy three hours to tow McMahon and help Harris back to the PT hulk. Unfortunately, TM2/c Andrew Jackson Kirksey and MoMM2/c Harold W. Marney were killed in the collision with Amagiri.

Because the remnant was listing badly and starting to swamp, Kennedy decided to swim for a small island barely visible (actually three miles) to the southeast. Five hours later, all eleven survivors had made it to the island after having spent a total of fifteen hours in the water. Kennedy had given McMahon a life-jacket and had towed him all three miles with the strap of the device in his teeth. After finding no food or water on the island, Kennedy concluded that he should swim the route the PT boats took through Ferguson Passage in hopes of sighting another ship. After Kennedy had no luck, Ross also made an attempt, but saw no one and returned to the island. Ross and Kennedy had spotted another slightly larger island with coconuts to eat and all the men swam there with Kennedy again towing McMahon. Now at their fourth day, Kennedy and Ross made it to Naru Island and found several natives. Kennedy cut a message on a coconut that read "11 alive native knows posit & reef Naru Island Kennedy." He purportedly handed the coconut to one of the natives and said, "Rendova, Rendova!," indicating that the coconut should be taken to the PT base on Rendova.

Kennedy and Ross again attempted to look for boats that night with no luck. The next morning the natives returned with food and supplies, as well as a letter from the coast watcher commander of the New Zealand camp, Lieutenant Arthur Reginald Evans. The message indicated that the natives should return with the American commander, and Kennedy complied immediately. He was greeted warmly and then taken to meet PT 157 which returned to the island and finally rescued the survivors on 8 August.

Kennedy was later awarded the Navy and Marine Corps Medal for his heroics in the rescue of the crew of PT 109, as well as the Purple Heart Medal for injuries sustained in the accident on the night of 1 August 1943. An official account of the entire incident was written by intelligence officers in August 1943 and subsequently declassified in 1959. As President, Kennedy met once again with his rescuers and was toasted by members of the Japanese destroyer crew. 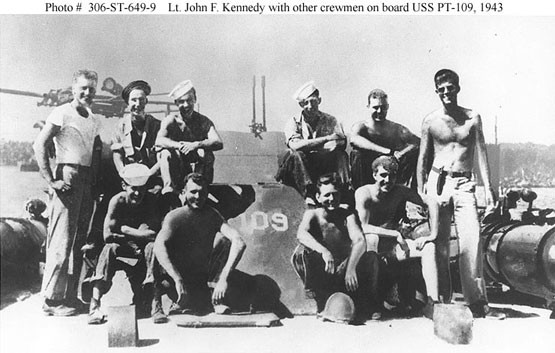