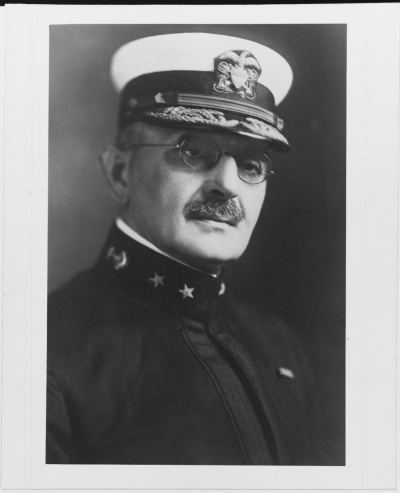 Prussian born, August F. Fechteler graduated with the U.S. Naval Academy class of 1877.  Fechteler was assigned sea duty at the European Station between 1879-1888.  Between 1889 and 1892 he was assigned to the Bureau of Navigation and Office of Naval Intelligence in Washington, DC.  Fechteler joined the USS Concord in December 1898, taking part in operations against Filipino insurrectionists.  For much of the next decade Fechtler served in the capacity of Navy inspector with the Bureau of Ordnance and Engineering, then the Board of Inspection and Survey (President, 1911).  Fecthler subsequently commanded the Second, Seventh, and Sixth Divisions, Atlantic Fleet from November 1914 through February 1918.  In the first year of U.S. involvement in the Great War, Fechtler Commanded Squadron Three, Division Six of Battleship Force Two with USS Utah as his flagship.  From 5 February through the end of WWI he served as Commandant, Navy Yard, Norfolk.  Fechteler earned a Navy Cross for his leadership of Sixth Division during the Great War.  He died 26 May 1921 at Naval Operating Base, Hampton Roads.  He was interred in Arlington National Cemetery.  Fechteler had two sons that also served in the Navy—naval aviator Lt. Frank Casper Fechteler died in an airplane crash in 1922, William M. Fechteler served as Chief of Naval Operations from August 1951-August 1953.