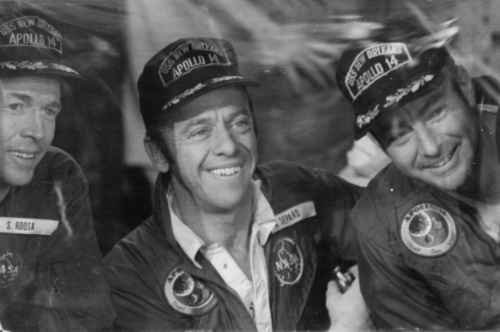 Captain Edgar Dean Mitchell is the sixth man in history to walk on the lunar surface. After obtaining a degree in Industrial Management from the Carnegie Institute of Technology in 1952, Mitchell joined the Navy and completed his basic training at the San Diego Recruit Depot. In May 1953, Mitchell completed instruction at the Officer's Candidate School at Newport, Rhode Island and was commissioned as an Ensign. From 1957 - 1958, Mitchell flew A3 aircraft while assigned to Heavy Attack Squadron Two deployed aboard the USS Bon Homme Richard (CV-31) and the USS Ticonderoga (CV-14).  Mitchell earned a Doctor of Science degree in Aeronautics and Astronautics from the Massachusetts Institute of Technology in 1964. Selected by NASA to be an astronaut in April 1966, Mitchell subsequently served as a member of the astronaut support crew for Apollo IX and served as a backup lunar module pilot for Apollo X. On 31 January 1971, serving as lunar module pilot, Mitchell embarked on a journey over 500,000 miles through space aboard the Apollo XIV spacecraft.  Following Apollo XIV, Mitchell was the backup lunar module pilot for Apollo XVI. In 1972, Mitchell retired from both NASA and the U.S. Navy and founded the Institute for Noetic Sciences in 1973.  Mitchell devoted himself to the exploration of the human mind, physics, and the unexplained.  He passed on 4 February 2016; his death coincided with the 45th anniversary of the Apollo XIV mission.