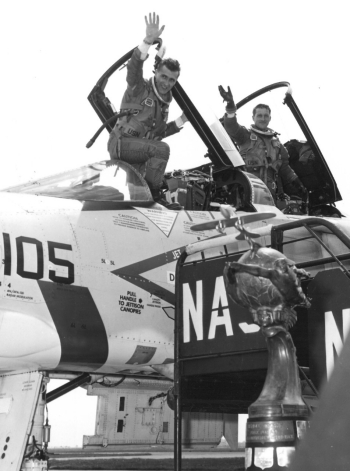 Department of the Navy
Office of Information

Richard Francis Gordon, Jr., was born in Seattle, Washington, on October 5, 1929, son of Richard F. and Angela Frances (Sullivan) Gordon.  He attended North Kitsap High School, Poulsbo, Washington, and the University of Washington at Seattle, from which he received the degree of Bachelor of Science in Chemistry in 1951.  He enlisted in the U. S. Naval Reserve, served as an Airman at the Naval Air Station, Sand Point, Washington.  Appointed Aviation Cadet in August 1951, he had flight training at the Naval Air Basic Training Command, Naval Air Station, Pensacola, Florida, and at the Naval Air Advanced Training Command, Naval Air Station, Corpus Christi, Texas.  Designated Naval Aviator and commissioned Ensign, U. S. Naval Reserve, on March 25, 1953, he subsequently advanced in rank to that of Captain, to date from December 11, 1969, having transferred to the Regular Navy on August 3, 1955.

After receiving his “Wings” in March 1953, he had instruction for two months at the naval School, All Weather Flight, Naval Air Station, Corpus Christi, and for one month at the Naval Auxiliary Air Station, Kingsville, Texas.  In June of that year he joined Fighter Squadron ELEVEN to serve as Navigation Officer, Communications Officer and Naval Aviator until January 1957, when he reported for instruction at the Naval Air Test Center, Patuxent River, Maryland.  In August that year, he transferred to the Flight Test Division, Naval Air Test Center, where he had duty as a Project Pilot, Project Officer, and First Lieutenant until March 1960.

“…Exercising outstanding airmanship and resourcefulness, (he) succeeded in winning the Bendix Trophy Race and in establishing a new transcontinental speed record for the jet aircraft from Los Angeles, California to New York, New York, with an elapsed time of two hours and forty-seven minutes, which is twenty-one minutes under the previous record time for this event…”

From July to December 1963 he had instruction at the U. S. Naval Postgraduate School, Monterey, California.  Selected as one of the third group of astronauts by the National Aeronautics and Space Administration, in October 1963, he began training at the Manned Spacecraft Center, Houston, Texas, in December 1963.  He has served as backup pilot for the Gemini VII flight.

On September 12, 1966, he served as pilot for the 44 orbit Gemini XI mission.  He executed docking maneuvers with the previously launched Agena and performed two periods of extravehicular activity which involved attaching a tether to the Agena and retrieving a nuclear emulsion experiment package.  Other highlights of the flight included the successful completion of the first tethered station-keeping exercise, establishment of a new record-setting altitude of 850 miles, and the first closed-loop controlled reentry.  The flight was concluded on September 15, 1966, with the spacecraft landing in the Atlantic, two and one-half miles from the prime recovery ship USS Guam (LPH-9).  He was awarded a Gold Star in lieu of the Second Distinguished Flying Cross with the following citation:

“For heroism and extraordinary achievement…as an Astronaut with NASA from September 12 to 15, 1966 aboard Gemini XI.  While serving as Pilot, Commander (then Lieutenant Commander) Gordon completed a space flight of seventy-one hours and sixteen minutes.  A rendezvous in the first revolution, docking, two periods of extravehicular activity, an exercise in the dynamics of two spacecraft linked together by a one hundred-foot strap and full-automatic reentry highlighted the Gemini XI mission.  During this period, Commander Gordon carried out the re-docking maneuver, the first docking by a ‘right-seater.’  During the umbilical extravehicular activity, he left the spacecraft to retrieve the S-9 Nuclear Emulsion Experiment package from the Agena…”

He is a member of the Society of Experimental Test Pilots.  His hobbies include water skiing, sailing and golf.