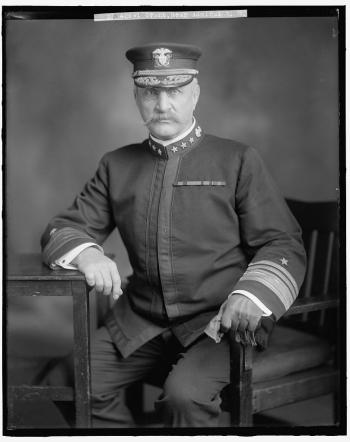 Albert Weston Grant served on USS Massachusetts (Battleship No. 2) during the bombardment of Santiago, Cuba in the Spanish-American War and commanded Battle Force One, Atlantic Fleet in the western Atlantic during World War I.  He oversaw the earliest installations of electric plants in U.S. warships and developed the standard textbook of naval tactics, The School of the Ship, while on duty as head of the Seamanship Department at the U.S. Naval Academy, 1905-06.  An 1877 graduate of the Naval Academy, Grant supervised pioneering work in the application of electricity to USS Pensacola (Screw Steamer) at the Norfolk Navy Yard.  He similarly oversaw upgrades to USS Charleston (Cruiser No. 2) and USS San Francisco (Cruiser No. 5) at the Mare Island Navy Yard from 1889-90.  Grant served as Executive Officer aboard USS Oregon (Battleship No. 3) following the Spanish-American War and soon after took command of USS Frolic (Yacht).    After duty at the Naval Academy and completing of a course at the Naval War College, Grant commanded USS Arethusa (Steamer).  On the world tour of the Great White Fleet, 1908-1909, Grant served as the chief-of-staff to the Commander of the Atlantic fleet aboard USS Connecticut (Battleship No. 18), later taking command of the ship.    In 1913 he began a tour of duty at the Newport News Shipbuilding company overseeing the completion of USS Texas (Battleship No. 35).  He assumed her first command after commissioning in March 1914.  In the years before the U.S. entered WWI, Grant commanded Submarine Force Atlantic Fleet. Vice Admiral Grant assumed command of Battleship Force One, Atlantic Fleet in July 1917 and was awarded the Distinguished Service Medal for his service during World War I.   Following WWI, he was appointed Commandant of the Washington Navy Yard and Superintendent of the Navy Gun Factory.  He retired in April 1920 and passed ten years later at the Naval Hospital in Philadelphia.