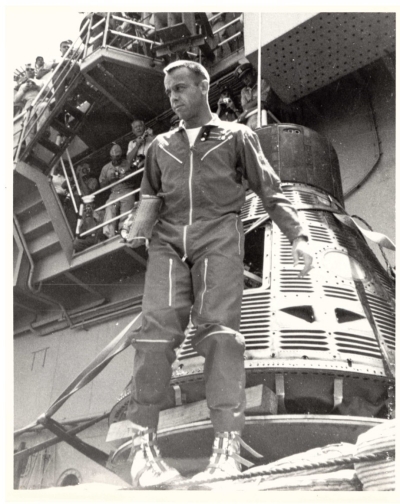 A veteran of the Pacific Theater in WWII and the Korean War, Alan Shepard also served as a Navy test pilot and a NASA astronaut. Shepard was a member of the U.S. Naval Academy class of 1945 (graduated in 1944 due to accelerated course instruction) and became the first astronaut to receive flag officer rank.  From August 1945-October 1945, Shepard served on board USS Cogswell (DD-561) and fought in the Western Caroline Islands, Leyte, Luzon, and Okinawa.  Following WWII, he underwent flight training and became a naval aviator in 1947.  Between 1951-57 he was a test pilot in addition to serving as an Operations Officer in Fighter Squadron 193 from 1953-55 doing two cruises in the western Pacific aboard USS Oriskany (CV-34).  Shepherd was selected by NASA to be part of Project Mercury in April 1959 and began training to go into space in February 1961.  Shepard made a brief fifteen-minute space flight on 5 May 1961, becoming the first American to do so.  Doctors diagnosed Shepard with Ménière's Disease, an inner ear disorder causing vertigo, in 1964.  He continued serving with NASA through the 1960s as Chief of the Astronauts Office—primarily monitoring astronaut crews and developing training for the Gemini and Apollo programs.  Corrective surgery in 1969 restored Shepard to full flight status.  He made his return to space as the commander of the Apollo XIV mission 31 January- 9 February 1971.  This mission included the third manned lunar landing.  Shepard, accompanied by Stuart Roosa, and Edgar Mitchell spent thirty-three hours on the lunar surface and collected 100 pounds of lunar samples.  After the Apollo XIV mission, Shepard resumed duties as Chief of the Astronauts Office until his retirement in 1974.  He worked in the private sector following retirement and served as President of the non-profit Mercury Seven Foundation.  He died of leukemia in 1998 and he and his wife’s ashes were spread near their Pebble Beach home.