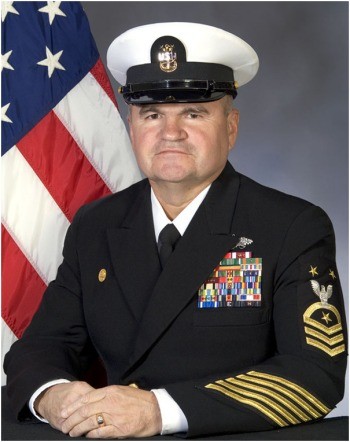 Force Master Chief Fairbanks is a Chippewa Indian. He was born and raised on the White Earth Indian Reservation in Northern Minnesota. After graduating from high school, he enlisted in the U.S. Marine Corps in November 1970. After completing basic training at Marine Corps Recruit Depot, San Diego, Calif., he received orders to Second Battalion Eleventh Marines (2/11), Camp Pendleton, Calif. Corporal Fairbanks was honorably discharged in September 1972.

As a civilian, Master Chief Fairbanks was employed with American Iron and Supply Company as a welder and Union Steward until December 1976.

He returned to active duty in the U.S. Navy in January 1977, and was assigned to Amphibious Construction Battalion Two, Little Creek, Va. After completing a two-year tour, he was honorably discharged January 1979.

He then returned to work for American Iron and Supply Company in Minneapolis, Minn. until August 1986.

CMDCM Fairbanks re-enlisted in the U.S. Navy September 1986 and was assigned to NMCB ONE, Gulfport, Miss., until February 1990. He received orders to the Naval Construction Training Center, Gulfport Miss. His next duty station was Public Works Department, Keflavik, Iceland. Upon completion of a 30-month tour, he transferred to NMCB 133, where he served until January 1999.

He then reported to the Naval Construction Training Center in March 1999, and served as the Command Master Chief until May 2001. He reported to NMCB-1 May 2001 and served with the "First and the Finest" until December 2002 and then transferred to the 22ND Naval Construction Regiment. After completing a three year tour, he was selected as the Force Master Chief for the Seabees and is currently serving with NAVFACENGCOM in Washington D.C.

Master Chief Fairbanks is a graduate of the U.S. Navy Senior Enlisted Academy, Class 85, Green Group. He has earned an Associate of Arts degree from the University of Phoenix, Ariz.