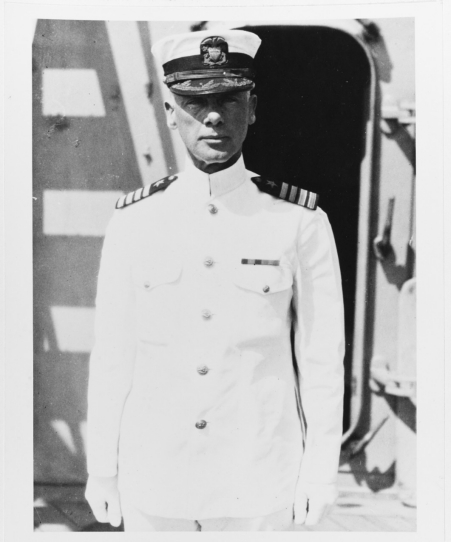 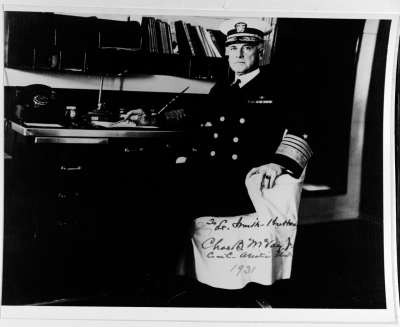 Admiral Charles Butler McVay, Jr. graduated from the U.S. Naval Academy in 1890.  During the Spanish American War he served as an officer on USS Amphitrite (Monitor No. 2), participating in the blockade of Cuba and bombardment of San Juan, Puerto Rico.   McVay was the navigator of the flagship USS Alabama (Battleship No. 8) during the 1907-1909 world cruise of the Great White Fleet.  Before the United States entered World War I, McVay served as Assistant to the Chief of the Bureau of Ordnance in Washington, DC.  Through American involvement in WWI McVay commanded USS New Jersey (Battleship No. 16) and USS Oklahoma (Battleship No. 37), which stood ready to oppose German cruisers from Bantry Bay, Ireland.  Following the war, he commanded the four destroyer escort that returned President Woodrow Wilson safely home from the Versailles Peace Treaty meetings.  McVay served as Commandant of the Washington Navy Yard and Superintendent of the Naval Gun Factory in 1920 until becoming Chief of the Naval Bureau of Ordnance.  While Chief of the Bureau of Ordnance, McVay oversaw many technological advancements such as modern fire control systems on ships, launching of airplanes from ships, and launching of torpedoes from airplanes.  From 1923 to 1925, McVay commanded all men-of-war in the Yangtze River Patrol.  Between 1929 and 1931 he was Commander-in-Chief of the U.S. Asiatic Fleet.  McVay retired in 1932, but served as a member of the Navy’s General Board.  He died in 1949 and is interred in Arlington National Cemetery.  McVay’s son, Rear Admiral Charles B. McVay III, captained USS Indianapolis (CA-35) during her fatal final voyage in July 1945.