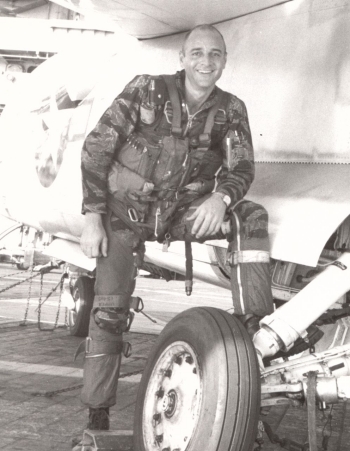 Following the completion of his first space flight, Captain Ronald E. Evans established a record of more time in lunar orbit than anyone else in the world, a record that stands to this day. Evans completed his undergraduate studies at the University of Kansas in 1956 with a B.S. in Electrical Engineering. In June 1957, Evans completed flight training after receiving his commission as an Ensign through the Navy ROTC Program at the University of Kansas. Evans was on sea duty in the Pacific flying Vietnam combat operations with VF-51 flying F-8 aircraft aboard the USS Ticonderoga (CV-14) when he heard of his selection to NASA in 1966. One of 19 astronauts selected by NASA in 1966, Evans initially served as a member of the astronaut support crews for both the Apollo VII and Apollo XI missionss and then as backup command module pilot for Apollo XIV. For his first journey into space, Evans acted as command module pilot for Apollo XVII, the last manned moon mission, which commenced 6 December 1972 and concluded 19 December 1972. He subsequently served as backup command module pilot for the Apollo-Soyuz mission which launched in July 1975. On 30 April 1976, Evans retired from the U.S. Navy after 21 years of service. Evans continued to remain active within NASA until March 1977, when he retired to become an executive in the coal industry. Ronald Evans passed away 6 April, 1990.