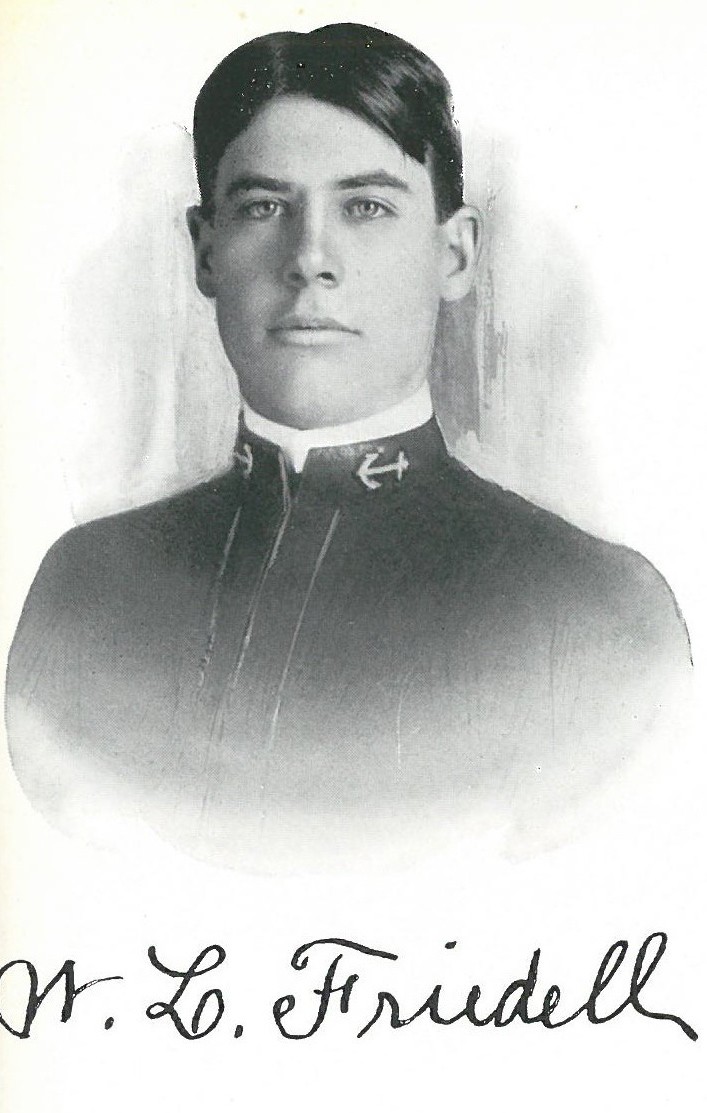 Wilhelm Lee Friedell graduated from the United States Naval Academy in 1905 then served the required two years at sea prior to being commissioned Ensign on 31 January 1907.  His two years afloat as we on board USS Kentucky  (Battleship No. 6) during the Cuban pacification.  He continued duty on that battleship when it embarked on the 1908 World Cruise and then was detached in Manila to join USS Helena (Gunboat No. 9) at the Asiatic Station.  On Helena, he participated in the South China and Yangtze Patrols.  He commanded the gunboat USS Villalobos (Screw Gunboat) on the Yangtze Patrol from January 1910 through October 1911.  His next assignment was as Navigator on USS New Orleans (Protected Cruiser) until February 1912.  During his time on New Orleans he commanded a landing party at Nanking to protect the American Consulate during the Chinese Revolution.  After duty in the Far East, he returned to the Naval Academy as an instructor from March 1912 through April 1914.  His next duty at sea was the command of the First Division, Submarine Flotilla, Atlantic Fleet on USS C-3 (Submarine No. 14). This commanded lasted from June 1914-September 1916 and during it he won the engineering trophy for submarines.  He assumed command of submarine tender USS Bushnell (AS-2) in 1916 and commanded her in European waters through the Great War.  He was awarded the Navy Cross for his command of a Submarine Division Detachment during the war.  Following the war, Friedell commanded the Submarine Repair Division at the Philadelphia Navy Yard and then returned to instruct at the Naval Academy.  After serving as Executive Officer on board USS Connecticut (Battleship No. 18) from June 1921-spring 1922, he assumed command of USS Rainbow (Submarine Tender No. 7) with command of Submarine Division 12 at the Asiatic Station.  From 1923-26 he had instruction duty at the Naval Academy and from 1926-1928 he commanded Submarine Division 11, Battle Fleet.  After completing a senior course at the Naval War College in 1929, he was Head of the Department of Electrical Engineering at the Naval Academy until the summer of 1931.  His next major command was of USS Colorado (Battleship No. 45) from February 1936-July 1937.  While in command of her, he supervised the search for Amelia Earhart’s lost plan in 1937.  He commanded Submarine Force, U.S. Fleet from November 1940 through January 1941.  Through the rest of World War II he served as Commandant of Navy Yard, Mare Island.  In 1944 he became Commandant, Eleventh Naval District and Commander Naval Operating Base San Diego. Friedell died on 27 January 1958.  He is buried in Fort Rosecrans National Cemetery, San Diego, California.