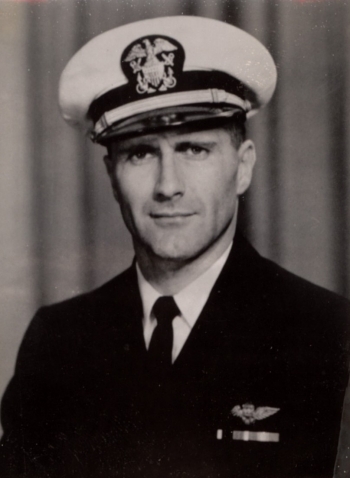 Selected by NASA in October 1963 as one of the third group of astronauts, Richard F. Gordon Jr. served on both Gemini and Apollo Programs. Following his graduation from the University of Washington in 1951 with B.S. in Chemistry, Gordon received his wings as a Naval Aviator in 1953. In 1957, he attended the Navy’s Test Pilot School at Patuxent River, MD, and served as a flight test pilot until 1960. During this tour he worked with a multitude of aircrafts, including the F4H Phantom II in which he was the first project test pilot. His first mission with NASA was as a backup pilot for Gemini VIII. On 12 September 1966, Gordon served as pilot for the 3-day Gemini XI mission. After the Gemini program, Gordon was assigned as backup command module pilot for the Apollo IX mission. From 14-24 November 1969, Gordon piloted the command module on the Apollo XII mission with fellow Navy men Charles Conrad and Alan L. Bean. In 1971, Gordon completed his final space flight on the Apollo XV mission. He subsequently was given new responsibilities as Chief, Advanced Programs of the Astronaut Office, and worked on the design and testing of the new Shuttle and Development Equipment. In January 1972, Gordon retired from the U.S. Navy and NASA after 22 years of service. Throughout his career Richard F. Gordon Jr. collected over a dozen prestigious awards and commendations for his service to the United States.