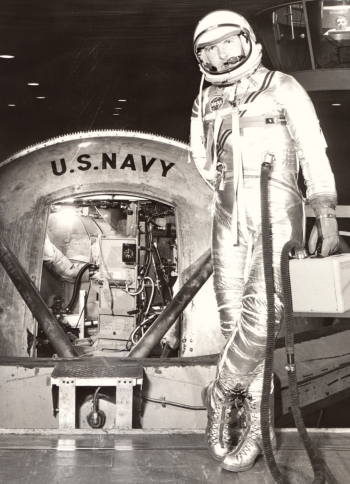 Korean War veteran Walter “Wally” M. Schirra Jr. flew a total of 90 combat missions as an exchange pilot with the 154th U.S. Air Force Fighter Bomber Squadron in F-84E aircraft. Schirra was among the first group of seven astronauts selected by NASA in 1959 and participated in projects Mercury, Gemini, and Apollo. He was the only astronaut ever to fly in each of these programs. In 1962, Schirra became the fifth American in space and the third American to orbit the Earth, circling the globe a total of six times in the Mercury-Atlas VIII flight which lasted more than nine hours.  Schirra is credited with achieving the first space rendezvous in the Gemini program.  He commanded Apollo VII, the eleven day shakedown mission of the Apollo Command Module in October 1968.  Schirra retired from NASA and the U.S. Navy after the Apollo VII mission.  Schirra continued his connection with the American space program by covering the subsequent Apollo flights for the CBS network alongside Walter Cronkite.  Throughout his career as both an astronaut and Naval officer, Schirra logged a total of 3,200 hours in flying. Schirra went on to receive a total of 3 honorary doctorate degrees in his lifetime, as well as attaining over 10 highly prestigious awards and honors. Schirra was inducted into the International Aviation Hall of Fame in 1970, New Jersey Aviation Hall of Fame in 1977, International Space Hall of Fame in 1981, and the National Aviation Hall of Fame in 1986. Walter M. Schirra Jr. passed away on 2 May 2007 at the age of 84. On 11 February 2008, the ashes of Schirra and eight other Navy veterans were committed to the sea during a special burial at sea ceremony on board USS Ronald Reagan (CVN-76).