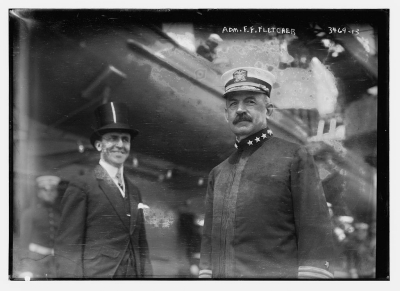 Admiral Frank Friday Fletcher contributed to advancements in U.S. Naval ordnance and torpedo warfare doctrine at the turn of the 18th/19th century.  In addition to technological and tactical contributions, he earned the Congressional Medal of Honor for his leadership of naval forces during the landings at Vera Cruz, Mexico in 1914 and the Distinguished Service Medal for his contributions to WWI planning on the Navy’s General Board.  After graduating in the U.S. Naval Academy class of 1875, Fletcher spent several years at sea.  He was a crewman on the 1878-1880 round the world voyage of USS Ticonderoga (Screw Sloop-of-War) to expand U.S. trade relations.  After sea duty, Fletcher received ordnance training and had duty with the Bureau of Ordnance at the Washington Navy Yard from 1887-1891.  Fletcher next commanded USS Cushing (Torpedo Boat No. 1) in Newport, Rhode Island from 1892-1895 and helped develop the U.S. Navy’s torpedo warfare doctrine.  From July-August 1898, Fletcher commanded USS Kanawha II (Screw Steamer), which operated in Cuban waters as a support vessel for U.S. occupation forces. Fletcher next took command of USS Eagle IV (Patrol Vessel Converted Yacht), refitted to survey the Caribbean waters.  He commanded her until 1901 and did additional tours of duty at Washington Naval Yard and Torpedo Station in Rhode Island until 1905.  Fletcher completed courses from the Naval War College between 1907-1908, then served on the Navy’s General Board.  By 1910 he achieved the rank of Rear Admiral as Secretary of the Navy’s Aide for Material.  He next commanded Battleship Divisions Two, Three, and Four of the Atlantic Fleet during the Vera Cruz occupation.  From 1914-1916 he was most senior ranking of Navy’s new four-star admirals as Commander in Chief of the Atlantic Fleet.  Admiral Fletcher contributed to U.S. planning in WWI as a member of the Navy Board and War Industries Board.  He retired in 1919 and continued to advise U.S. leaders on defense policy.  He died in 1928 and was interred in Arlington National Cemetery.  The Fletcher-Class Destroyer [USS Fletcher (DD-445)] , one of the most successful designs of WWII, was named after Frank Fletcher.