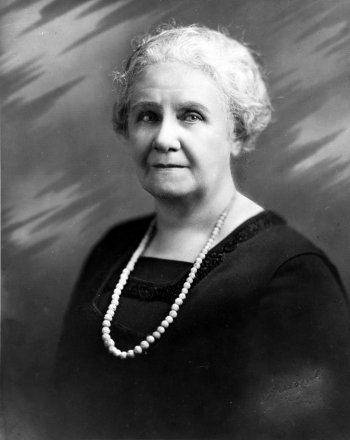 First superintendent of the Navy Nurse Corps, from 18 August 1908 to 10 January 1911. Official U.S. Navy photograph, now in the collections of the National Archives.

Esther Voorhees Hasson became the first superintendent of the Navy Nurse Corps in August 1908. She served as a contract nurse for the U.S. Army in the Spanish-American War and the Philippine Insurrection between 1898 and 1901. She was aboard the hospital ship USS Relief (USAHS) on its maiden voyage. From 1905 through 1907 she worked in hospitals  within the Canal Zone in Panama. Hasson was one of three women who applied for the position of superintendent of the Navy Nurse Corps when it was established by Congress 13 May 1908. She was selected and appointed to the position on 18 August 1908.  Superintendent Hasson established a rigid application and indoctrination program for her nurses that was viewed favorably by the Army Nurse Corps and the broader nursing profession. Hasson, and the nineteen nurses chosen for the first Navy Nurse Corps, are known as the “Sacred Twenty.” Hasson resigned from her position on 16 January 1911. After her resignation from the Navy she reentered the U.S. Army Nurse Corps through the reserves. When the United States entered WWI, she was activated on 18 June 1917 and sailed for Europe shortly thereafter. She returned to the United States on 8 April 1919 and left active service 21 June 1919. She received the French Medal d’Honneur des Epidemicsi for her wartime service. Hasson was a founding member of the Spanish-American War Nurses Association. She passed away in Washington, DC on 8 March 1942. Her remains were interred in Arlington National Cemetery with three Army and three Navy nurses serving as pallbearers.