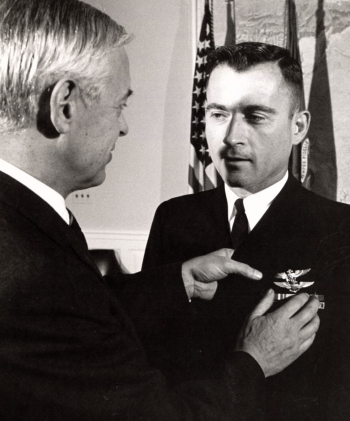 John W. Young was a highly decorated Navy Captain, and the longest serving U.S. astronaut. Following his graduation from Georgia Tech, Young joined the Navy in 1952.  He became a NASA astronaut in 1962. After serving on the USS Laws (DD-558) for one year, he was assigned to Fighter Squadron 103 for four years where he logged thousands of hours flying Cougars and Crusaders. In 1962, Young set the world time-to-climb records to 3,000- and 25,000-meter altitudes in the Phantom. In September of that same year, Young was selected as an astronaut. He was the first person to fly in space a total of six times. On his fourth flight into space, Young commanded Apollo XVI on 16-27 April, 1972. Along with fellow astronaut Charlie Duke, Young collected almost 200 pounds of rocks and drove over 27 kilometers in the lunar rover while on the moon. After nearly 25 years of active military service, Young retired from the Navy at the rank of Captain in September 1976. He commanded Space Shuttle Columbia on its maiden orbital voyage with fellow astronaut Bob Crippen on 12-14 April, 1981. Columbia was the first manned spaceship to be flown into orbit without benefit of previous unmanned orbital testing, as well as being the first winged reentry vehicle to return from space to a runway landing. Young's sixth and final flight into space was as Spacecraft Commander of STS-9, the first Spacelab mission, 28 November – 8 December 1983. Following his retirement 31 December 2004, Young had collected over 40 prestigious awards along with 3 honorary doctorate degrees.  Young notably is the only astronaut to command four different classes of spacecraft from Gemini through the shuttle missions.