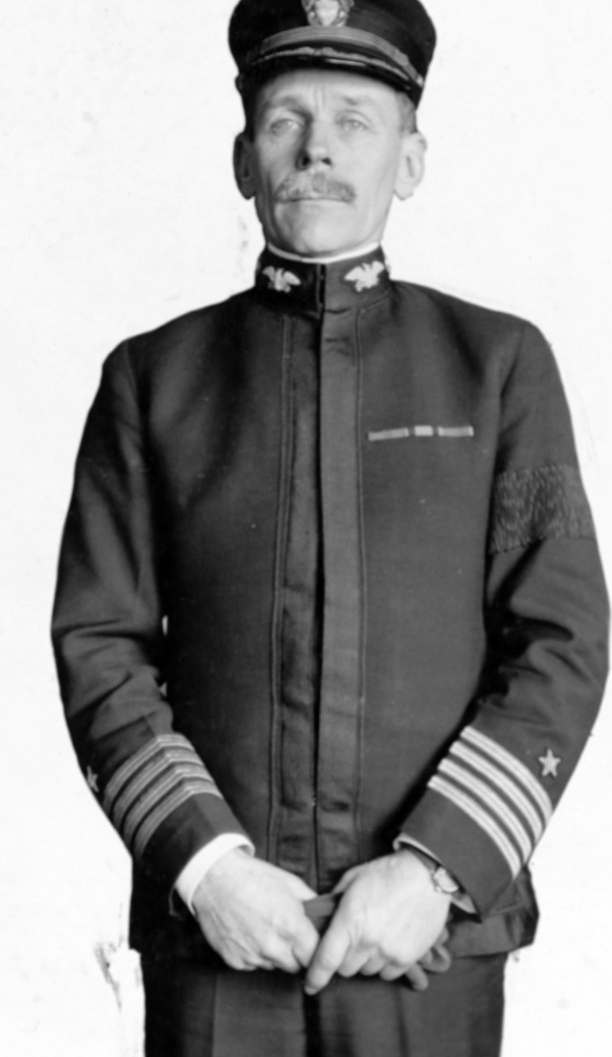 An 1891 graduate of the United States Naval Academy, Reginald Belknap served the then two years required at sea on board USS Chicago (Cruiser) prior to his commissioning as Ensign in June 1893.  During the Spanish-American War he had duty of Flag Secretary on the Staff of the Commandant of the Naval Base, Key West, Florida.  In early 1900 he had duty with the Samoan High Commission and from April 1900 through May 1902 served at the Asiatic Station on board USS Brooklyn (Armored Cruiser No. 3) earning the Philippine Campaign Medal.  From June 1902-November 1904 he completed a tour of duty at the Bureau of Navigation in Washington, DC.  In August 1905 he served as Executive Officer on board USS Kearsarge (Battleship No. 5).  From November 1907 through October 1910 he was the U.S. Naval Attaché in Berlin, and then served an additional year as Naval Attaché at Rome and Vienna.  In the years prior to World War I he served as Executive Officer on board USS North Dakota (Battleship No. 29) and Assistant to the Chief of the Bureau of Navigation.  At the outbreak of World War I in Europe he served as Naval Aide to the Assistant Secretary of War on board USS Tennessee (Armored Cruiser No. 10) when that ship sailed to Europe to evacuate Americans from the continent.  He was detached from USS Tennessee (Armored Cruiser No. 10) for duty as the Assistant to the U.S. Naval Attaché in Berlin through the first year of the Great War.  In November 1914 he assumed command of USS Chester (Cruiser No. 1), in December he assumed command of USS San Francisco (Cruiser No. 5) and in July 1915 became Commander, Mining and Mine Sweeping Division Atlantic on board her.  This command was re-designated Mine Force, Atlantic Fleet by December 1915.  Belknap was briefly detached from this command for duty in the Office of CNO from September 1917 until he returned to the Atlantic Fleet to command Mine Squadron One on April 1918 in the war zone with USS San Francisco (Cruiser No. 5) and USS Baltimore (Cruiser No. 3) alternating as his flagships.  Captain Belknap received numerous commendations for his successful leadership of the U.S. Mine Force.  Following WWI, CNO Benson reported that “Captain Belknap deserves, in the opinion of the Chief of Naval Operations,  more credit for the success of this undertaking than any other man.”  Belknap served on the Staff of the Naval War College from 1919 through the end of 1920, then commanded Destroyer Submarine Base, Squantum, Massachusetts until he returned to the War College in June 1921.  His assignment at the War College ended in April 1923 and he reported to Camden, New Jersey to fit out USS Colorado (Battleship No. 45) before taking command of her until 1925.  He was Commander of Naval Training Station, Norfolk, Virginia at the time of his retirement on 30 June 1927.  He died 30 March 1959 after an active retirement.  He was interred in Arlington National Cemetery.

USS Belknap (DLG-26) was named to honor him and his father, Rear Admiral George Eugene Belknap.  The first USS Belknap (DD-251) was named for his father and earned a the Presidential Unit Citation and three Battle Stars for service in the Pacific and European Theaters during WWII.