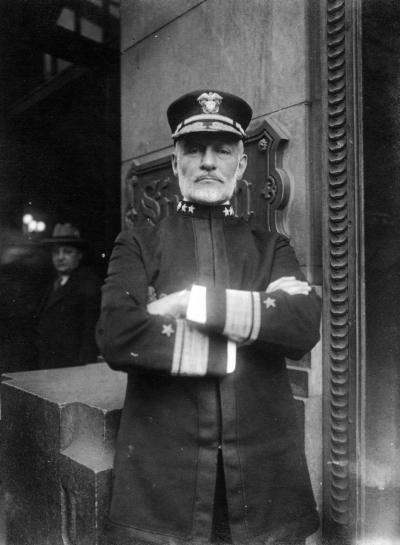 William Sowden Sims’ drive to modernize gunnery and professionalism in the late 19th/early 20th century U.S. Navy places him among the most influential figures of the modern service. Sims graduated from the Naval Academy in 1880. Seventeen years of sea duty were followed by assignments as Naval Attaché to Paris, St. Petersburg, and Madrid during the Spanish-American War.  From October 1901 through February 1902 Sims had duty on the staff of Commander-in-Chief, U.S. Asiatic Fleet.  During this time he saw firsthand the gunnery advancements of the British Navy with continuous-aim gunlaying and petitioned his chain of command to implement the system in the U.S. Navy.  Having no success, then a lieutenant, Sims directly wrote President Theodore Roosevelt in November 1901 to adopt the British gunnery system. In February 1902, Sims became Inspector of Target Practice; and, under his supervision, the British practices increased efficiency.  Sims subsequently became Naval Aide to President Roosevelt for two and one-half years and later commanded the Torpedo Flotilla, Atlantic Fleet in 1913 where he introduced organizational and tactical changes.  He became President of the Naval War College on 11 February 1917. In March 1917, he was designated by the Secretary of Navy Josephus Daniels  as Representative of the Navy Department in London. With the entry of the United States into World War I in April, he was ordered to assume command of all American destroyers, tenders, and auxiliaries operating from British bases. In May, he was designated as Commander of United States Destroyers Operating from British Bases, with the rank of Vice Admiral; and, in June, his title was changed to Commander, United States Naval Forces Operating in European Waters. On 10 December 1917, he assumed additional duty as Naval  Attaché, London, England. The North Sea Mine Barrage was laid under his direction. He returned to the presidency of the Naval War College in April 1919 and served in that capacity until his retirement on 15 October 1922. He died at Boston, Mass., on 25 September 1936.