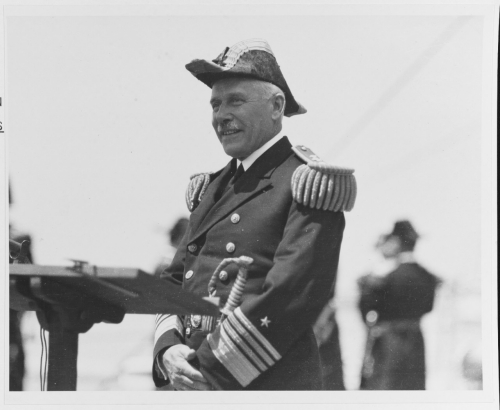 William V. Pratt was an innovator unafraid to question the Navy’s conventions. As Chief of Naval Operations during the first years of the Great Depression, when the Navy suffered from the lack of financial resources, he found creative ways to preserve the service’s efficiency.

Born in Belfast, Maine, William V. Pratt graduated from the U.S. Naval Academy in 1889. He participated in the Spanish American War and the Philippine American War, taught at the Naval War College, commanded the Atlantic Torpedo Squadron, and served with the Army in Panama and at the Army War College. During World War I, he was Assistant Chief of Naval Operations. Pratt achieved admiral’s rank in 1929 and the Navy’s top seagoing command, Commander in Chief, United States Fleet. As head of the U.S. technical staff at the London Naval Conference in 1930, called by the major powers to set limits on warships, he promoted compromise. Becoming Chief of Naval Operations in the midst of national economic crisis, Admiral Pratt worked to maintain the Navy in a high state of readiness, sponsoring a “Rotating Reserve” in which one third of the fleet was placed in reserve with a skeleton crew so that the remaining ships could keep full complements. He also modernized the fleet, completing the conversion of battleship fuel from coal to oil, and increasing the number of naval aircraft. USS William V. Pratt (DLG-13, later DDG-44) was commissioned in his honor.