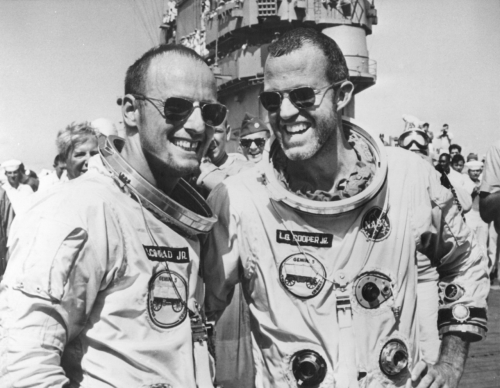 Charles Conrad, Jr., was born in Philadelphia, Pennsylvania, on June 2, 1930, son of Charles and Frances (Vinson) Conrad.  He received the degree of Bachelor of Science in Engineering from Princeton University in 1953.  While attending Princeton, he was a member of the Naval Reserve Officers Training Corps Unit and upon graduation was commissioned Ensign in the U. S. Navy, June 5, 1953.  He subsequently advanced in rank to that of Captain, to date from December 11, 1969.

After receiving his commission in 1953, he had flight training at the Naval Air Station, Pensacola, Florida, until March 1954, then continued his training at the Naval Air Station, Corpus Christi, Texas.  Designated Naval Aviator on September 24, 1954, he joined Fighter Squadron FORTY-THREE in October of that year and in February 1958 was detached to attend the naval Test Pilot School, Naval Air Test Center, Patuxent River, Maryland.

During the period March to October 1961, he was attached to Fighter Squadron ONE HUNDRED TWENTY-ONE, after which he served with Fighter Squadron NINETEY-SIX.  In September 1962, he was selected to participate in the National Aeronautics and Space Administration’s space program and in October 1962 reported for training at the Manned Spacecraft Center, Houston, Texas.

In August 1965, he served as Pilot on the Gemini V flight.  He and command pilot Gordon Cooper were launched into orbit on August 21 and proceeded to establish a new space endurance record of 190 hours and 56 minutes.  The flight, which lasted 120 orbits and covered a total of 3,312,993 statute miles, was terminated on August 29, 1965.  It was also on this flight that the United States took over the lead in man hours in space.  He was awarded the Distinguished Flying Cross and cited as follows:

“For heroism and extraordinary achievement…as an Astronaut with NASA from August 21 to 29, 1965, aboard Gemini V.  During this period, while serving as Pilot, Commander (then Lieutenant Commander) Conrad completed a space flight in an elapsed time of 190 hours and 56 minutes…The major objectives of the Gemini V flight were to demonstrate and evaluate the performance of the Gemini spacecraft for a period of eight days; to evaluate the performance of the rendezvous guidance and navigation system, using the radar evaluation pod; to evaluate the effects of prolonged exposure of the two-man crew to the space environment; and to conduct a total of seventeen experiments…”

On September 12, 1966, he occupied the command pilot seat for the 44 orbit Gemini XI mission.  He executed orbital maneuvers to rendezvous and dock in less than one orbit with a previously launched Agena and controlled Gemini XI through two periods of extravehicular activity.

Other highlights of the flight included the retrieval of a nuclear emulsion experiment package during the first Eva; establishing a new world space altitude of 850 statute miles; the successful completion of the first tethered station-keeping exercise, in which artificial gravity was produced; and the successful completion of the first fully automatic controlled reentry.  The flight was concluded on September 15, 1966, with the spacecraft landing in the Atlantic, two and one half miles from the prime recovery ship, USS Guam (LPH-9).  He was awarded a Gold Star in lieu of the Second Distinguished Flying Cross with the following citation:

“For heroism and extraordinary achievement…as an Astronaut with NASA from September 12 to 15, 1966, aboard Gemini XI.  During this period, while serving as Command Pilot, Commander Conrad completed a space flight of seventy-one hours and seventeen minutes…The objectives of this flight were rendezvous in the first revolution, docking, two periods of extravehicular activity, an exercise in the dynamics of two spacecraft linked together by a one hundred-foot strap, and full-automatic reentry, all of which were successfully accomplished…”

Captain Conrad was Command Pilot of the three-man crew of the Apollo XII, which also included Captain Alan L. Bean, USN and Captain Richard F. Gordon, Jr., USN. During the mission, which took place from November 14 to 24, 1969, he participated, along with Captain Bean, in two moon walks totaling eight hours on November 20.  During the first walk the set up an array of scientific experiments referred to as ALSEP (Apollo Lunar Surface Experiments Package) which consist of five main experiments: a solar wind spectrometer, a lunar ionosphere detector, a lunar atmosphere detector, a magnetometer, and a highly sensitive seismometer.  In addition to ALSEP experiments, they gathered rock and dust samples and during a second moon walk they retrieved and examined parts of the Surveyor III spacecraft which had been in the lunar atmosphere since April 1967.

He was awarded the Navy Distinguished Service Medal for the Apollo XII mission.

He was awarded two NASA Exceptional Service Medals and the Navy Astronaut Wings and is the recipient of Princeton’s Distinguished Alumnus Award for 1965.  He also has the National Defense Service Medal with bronze star.

Captain Conrad was a member of the American Institute of Aeronautics and Astronautics and the Society of Experimental Test Pilots.