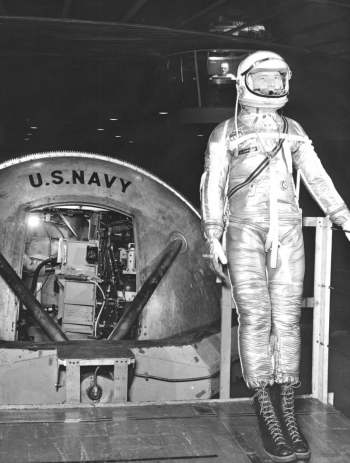 Malcolm Scott Carpenter served as a Navy fighter pilot in the Korean War, a NASA Astronaut in the Mercury Program, and as an aquanaut in the U.S. Navy’s SEALAB Program.  He has the distinction of being the first human to enter both outer and inner space.  Carpenter trained in the Navy’s V-12 and V-5 training programs during WWII, and went on inactive duty when the programs ended at war’s end.  In 1949 he was commissioned and an Ensign and underwent flight training.  He joined Patrol Squadron 6 in October 1951 and did multiple tours in Korea flying surveillance, submarine patrol, and aerial mining missions.  He next served as a test pilot until 1957 when he began training in air intelligence.  After duty onboard USS Hornet (CV-12) he was selected for NASA’s Mercury Program.  He successfully completed the United States’ second orbital flight on 24 May 1962, however, splashed down some 250 miles off target.  A motorcycle injury grounded Carpenter from future space flight, so he volunteered as an aquanaut for the U.S. Navy’s SEALAB Program in 1964.  Through 1965, Carpenter trained aquanauts for, SEALAB II, a mission to live on the ocean floor for an extended period of time.  Between 28 August 1965 and 13 October 1965, Carpenter lived and worked for thirty consecutive days in an under-water habitat 205 feet below the surface off the California coast.  In this program he led eight other aquanauts.  Carpenter continued working in the underwater program for the remainder of his career, finally planning for SEALAB III as the Navy’s Assistant for Aquanaut Operations.  He retired from the Navy in 1969 and began a career in the private sector raising awareness of ocean resources and the environment.  He also contributed his expertise towards improving diving equipment and commercial waste disposal.  Carpenter passed in 2013.