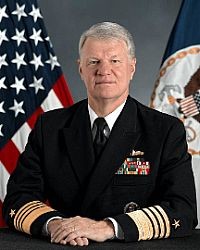 Adm. Roughead is a 1973 graduate of the United States Naval Academy.

Among his six operational commands, Adm. Roughead was the first officer to command both classes of Aegis ships, having commanded USS Barry and USS Port Royal.

Ashore, he served as Commandant, United States Naval Academy, the Department of the Navy’s Chief of Legislative Affairs, and as Deputy Commander, U.S. Pacific Command.

Adm. Roughead is one of only two officers to have commanded the Fleets in the Pacific and Atlantic, commanding the U.S. Pacific Fleet and Joint Task Force 519, as well as Commander, U.S. Fleet Forces, where he was responsible for ensuring Navy forces were trained, ready, equipped and prepared to operate around the world, where and when needed.