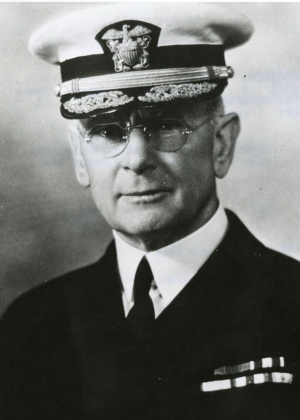 As Chief of Naval Operations in time of growing threat of world war, Admiral Standley helped to modernize the fleet and to reverse the downward trend in naval personnel strength.

William H. Standley, of Ukiah, California, graduated from the U.S. Naval Academy in 1895 and earned a commendation for bravery during the Philippine American War. His career included extensive sea duty, sea commands, and tours ashore, including Commandant of Midshipmen at the Naval Academy; head of the War Plans Division; and, in 1928, Assistant Chief of Naval Operations. Standley eventually attained the post of Commander Battle Force, U.S. Fleet. As Chief of Naval Operations, he frequently performed duties for the ailing Secretary of the Navy. Admiral Standley drafted the Vinson-Trammell Act by which Congress provided the funds for building the Navy to full strength allowed by the Washington and London arms limitation treaties. He advocated a regular ship construction schedule to maintain pace with emerging technologies and sponsored establishment of the Fleet Marine Force. Having retired in 1937, Standley was recalled to active duty in 1941 to serve on the Board of the Office of Production Management. He also served on the Roberts Commission to investigate the attack on Pearl Harbor. He was Ambassador to the USSR in 1942-1943. USS William H. Standley (DLG-32) was commissioned in his honor.