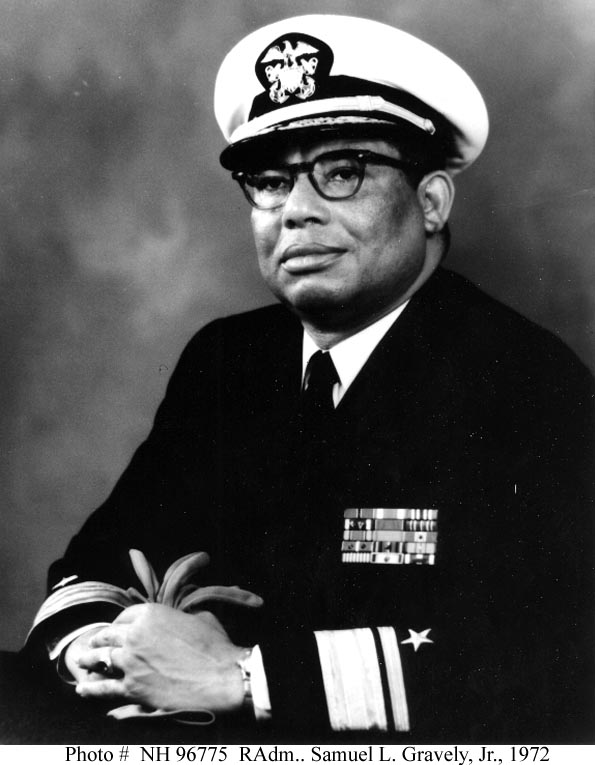 Vice Admiral Samuel Lee Gravely, Jr. had a distinguished naval career as a surface warfare officer and manager.  All leaders, civilian and military, officer or enlisted, government service grade or Senior Executive Service could learn the characteristics of effective leadership from Gravely's thirty-eight years in the Navy. There are several notable achievements to his credit including being the first African-American to command a combatant ship, to be promoted to flag rank, and to command a naval fleet.  Gravely's life and naval career, spanning from 1944 to 1982, also reflect the improved status of African-Americans in the Navy and in American Society.  As a distinguished veteran of World War II, and the Korean and Vietnam Wars, his military service suggests several qualities that a successful leader should possess.

The first attribute is simply "to be ready."  Gravely could not always determine when an opportunity would arise but he made sure that he had prepared himself to be able to respond to it.  Obstacles must be turned into opportunities.  For example, when the officers club prevented Gravely from entering, he used the time to complete Navy correspondence courses.  The additional education and training helped him become a better officer.  Like any other sailor, Gravely did not like every job the Navy gave him but he did his best in each of them.  In that sense, Gravely believed that all jobs were good jobs because they were chances to excel.  Regardless of the size of one's command, lead with integrity, professionalism, and care.  Gravely was a strategist as he faced more than a few challenges.  Instead of being overwhelmed by them or focusing on them, he found creative ways to circumvent them or to accept them and he always strove to learn from his experiences.  Gravely never sat on his laurels.  He continued to learn and to expand his horizons.  His career also suggests that leaders must be realistic and optimistic.  While Gravely understood the naval policies designed to limit African-Americans in the Navy, he did not let them limit or discourage him.  Another important characteristic is having the right attitude, as well as the appropriate credentials.  He believed that success and respect were not given to anyone; they had to be earned.  Another attribute of leadership is perseverance.  An effective leader has to be committed enough to the cause to focus on the goal.

Despite the difficulties, Gravely enjoyed his naval service.  This reminds leaders that it is important to know your job and to do it well but you should not forget to enjoy the work.  An effective leader strives to make a positive difference for others and has a genuine concern for others.  Good leaders are not born; they are developed and one measure of their success is that they have trained others to be effective leaders.

Finally, where one starts does not necessarily have to guarantee where he ends up.  Instead of accepting the odds for failure, one can beat the odds by working and studying hard.  Gravely began his career as a seaman apprentice at Great Lakes in 1942 and rose through the ranks to become a three star admiral.