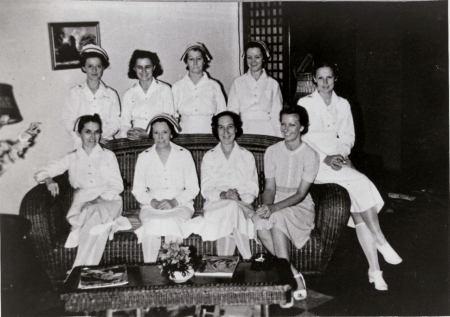 Ann Agnes Bernatitus was born in Exeter, Pennsylvania, on January 21, 1912, daughter of Alexander Bernatitus and Mrs. (Margaret Adamits) Bernatitus.  She received her education in the Exeter public schools, graduating from high school in 1928.  In 1931, she entered nurses’ training at the Wyoming Valley Homeopathic Hospital Training School, Wilkes-Barre, Pennsylvania, with an affiliation at the Pennsylvania General Hospital, from which she graduated in 1934.  The following year she took a postgraduate course in operating-room technique at the University of Pennsylvania Graduate Hospital at Philadelphia, and continued duty there as Staff Nurse from February to May 1935.  She was next Staff Nurse-Operating Room at the New Rochelle (New York) Hospital until July 1935, then had similar employment at the Nanticoke (Pennsylvania) State Hospital.

Appointed Ensign in the Navy Nurse Corpse on September 25, 1936, she progressed in grade to that of Commander, to date from January 1, 1950.  On April 1, 1959 she was transferred to the Retired List of the U. S. Navy and was advanced to the rank of Captain on the basis of a combat award.

After receiving her appointment in the Nurse Corpse in 1936, she reported as a Staff Nurse at the Naval Hospital, Chelsea, Massachusetts, and in September 1937 was transferred, in a similar capacity, to the Naval Hospital, Annapolis, Maryland.  She remained there until March 1940, after which she had duty as a Nurse in the USS Chaumont (AP-5).  Assigned in July 1940 to the U. S. Naval Hospital, Canacao, Philippine Islands, she was so serving when the news of the Japanese attack on Pearl Harbor, Territory of Hawaii, came.  Because of the location of the hospital it soon became necessary to evacuate the patients and newly arrived wounded to Manila.  During the work, she was a member of an emergency operating team working under Army orders.

On the morning of December 24, this team was suddenly ordered to Bataan, where again they worked under the Army.  There she saw the entire heroic drama of the American-Filipino stand.  In one eight-hour day, she saw two hundred and eighty five patients brought into the operating room, waiting their turn.  She treated her own countrymen and Japanese prisoners from dawn to midnight.

In April 1942, a few days before Bataan succumbed, she was evacuated to Corregidor where she served in the hospital wards of the beleaguered fort until two days before the end.  She and a few others were selected for an attempt to run the Japanese Blockade in the submarine USS Spearfish (SS-190), which had sneaked into Manila Bay.  After a seventeen day submarine trip through enemy-infested waters, she arrived in Australia, and then returned to the United States.  During this time of escape, she was listed on the Navy Department records as “missing in action.”

When the award of the Legion of Merit was created by Act of Congress in 1942, she was the first person in the naval service to receive this newly established award.  The citation follows in part:

”For exceptionally meritorious conduct…as a member of Surgical Unit #5 during the bombing of the Philippine Islands by enemy Japanese forces for the period of December 1941 through April 1942.  Constantly in the front lines of defense in the Manila-Bataan Area, and on two separate occasions forced to evacuate to new positions after Japanese bombs had wrecked the Surgical Unit, Nurse Bernatitus courageously withstood the dangers and rigors of tropical combat, rendering efficient and devoted service during the tense days of prolonged siege and evacuation.”

In addition to the Legion of Merit with Combat “V,” Nurse Bernatitus has the American Defense Service Medal, Base Clasp; Asiatic-Pacific Campaign Medal with two stars; World War II Victory Medal; Navy Occupation Service Medal; China Service Medal; Philippine Defense Ribbon; Philippine Liberation Ribbon and the Philippine Independence Ribbon.  She is also entitled to the Army Distinguished Unit Badge, which was awarded all personnel who served in defense of the Philippines.