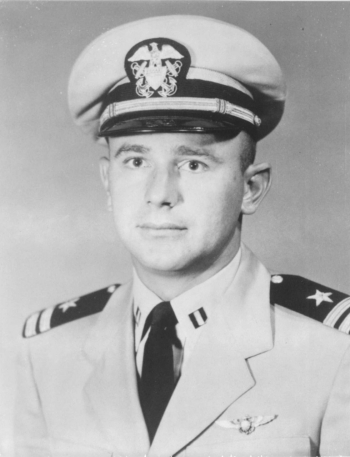 Throughout his career as an astronaut, Alan Bean served in numerous Gemini, Apollo, and Skylab missions in multiple capacities. Commissioned to the Navy in 1955 following his graduation from the University of Texas, Bean was stationed in Jacksonville, Florida and assigned to a jet attack squadron for a four year tour of duty.  His final Navy assignment was with Attack Squadron 44 at Cecil Field, Florida, as an A-4 attack replacement pilot. Bean logged a more than 7,145 hours flying time, including about 4,890 in jet aircraft. In 1963, Bean was one of the three groups of astronauts chosen by NASA. In his first two missions, he served as a backup astronaut.  Bean was named lunar module pilot for the Apollo XII mission (November 14-24 1969) where both he and Captain Pete Conrad explored the lunar surface. While Bean and Conrad conducted their mission on the moon, fellow astronaut Captain Richard Gordon remained in lunar orbit photographing landing sites for future missions. From 29 July - 25 September, 1973 as spacecraft commander of Skylab II (SL-3), Captain Alan Bean along with Dr. Owen K. Garriott and Marine Corps Lieutenant Colonel Jack R. Lousma, set a world-record setting flight of 24,400,000 miles. On 26 June 1981 at the age of 49, Bean retired from NASA to pursue a full time career as a painter. Throughout his professional career, Bean established 11 world records in space and astronautics.