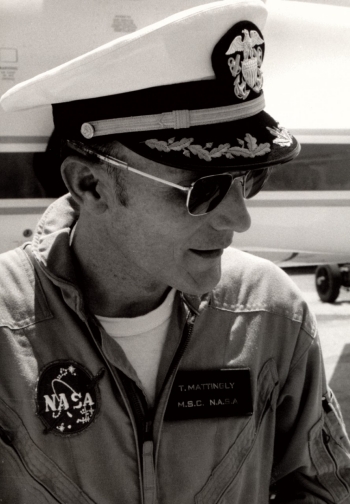 Rear Admiral Thomas K. Mattingly II visited the moon once and made great contributions to NASA throughout his career as an astronaut. After earning a degree in Aeronautical Engineering from Auburn University in 1958, Mattingly joined the U.S. Navy.  He received his wings in 1960 and served with Attack Squadron 35 aboard USS Saratoga (CVA-60) and Heavy Attack Squadron 11 aboard USS Franklin D. Roosevelt (CVA-42). Mattingly was studying at the Air Force Aerospace Research Pilot School when he learned of his selection to the NASA astronaut program in April 1966. After being selected, he subsequently served as a member of the astronaut support crews for the Apollo VIII and XI missions. Mattingly was designated command module pilot for the fateful the Apollo XIII flight but was removed from eligible flight status 72 hours prior to scheduled launch due to a medical concern. From 16-27 April 1972, he piloted the command module for the Apollo XVI flight. On this fifth manned lunar landing, he was accompanied by John W. Young and Charles M. Duke Jr. From January 1973 - March 1978, Mattingly worked as head of astronaut office support to the shuttle program. For his second flight, Mattingly commanded the fourth orbital test flight of the shuttle Columbia (STS-4) on 27 June 1982. Mattingly’s final flight was aboard the shuttle Discovery (STS-51C), the first Space Shuttle Department of Defense Mission on 24 January 1985. After resigning from NASA in 1985 and from the Navy in 1986, Mattingly entered the private sector and worked with various contractors.