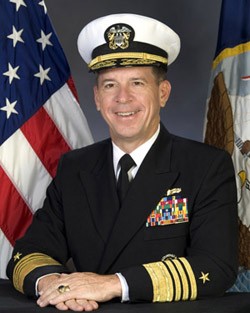 Admiral Mullen graduated from the U.S. Naval Academy in 1968. He has served in Allied, Joint and Navy positions, overseas and in both the Atlantic and Pacific Fleets.

Adm. Mullen graduated from the Naval Postgraduate School in Monterey, Calif., with a Master of Science degree in Operations Research. He is also a graduate of the Advanced Management

Program at the Harvard Business School.

Adm. Mullen's last operational assignment was Commander, Joint Force Command Naples/Commander, U.S. Naval Forces Europe. Based in Naples, Italy, he had operational responsibility for NATO missions in the Balkans, Iraq, and the Mediterranean as well as providing overall command, operational control, and coordination of U.S. naval forces in the European Command area of responsibility.