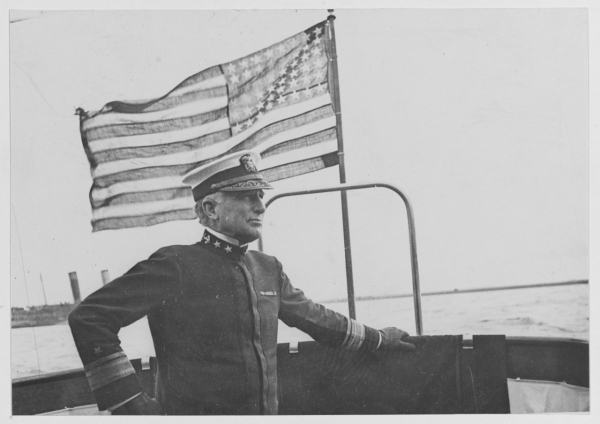 Among the highlights of Admiral Henry Brand Wilson’s forty-eight year career in the USN were his command of all U.S. Naval Forces in France through the final year of World War I and his 1921-25 tenure as Superintendent of the Naval Academy during its transition from a training school into an academic institution able to award its graduates a Bachelor of Science Degree.  An 1881 graduate of the Naval Academy, one of Wilson’s first assignments was four years aboard the training ship Saratoga (Sloop-of-War) instructing enlisted Sailors.  A career long interest in training and improving Navy personnel developed in Wilson during these years.  Wilson, then a lieutenant, was attached to the gunboat USS Bancroft (Practice Ship) during the Spanish-American War and commended for bravery in action.  Wilson’s first command was of  USS Chester (Cruiser No. 1) in 1908 and his second, USS North Dakota (Battleship No. 29) First Division, Atlantic Fleet in 1911.  Wilson earned a reputation as a capable seaman for his command of North Dakota, evidenced by his selection as commander of the newly built USS Pennsylvania (Battleship No. 38) flagship of Admiral Mayo, COMINCH Atlantic Fleet in June 1916.  Wilson commanded Pennsylvania when the United States entered World War I.  In April 1917 he was given command of the Atlantic Fleet Patrol Force with USS Olympia (Cruiser No. 6) as his flagship.  By the summer of 1917 he commanded the U.S. Patrol Squadrons at Gibraltar with USS Birmingham (Scout Cruiser No. 2) as his flagship.  At this post he was responsible for the escort of convoys in the Mediterranean and to the British Isles.  He assumed command of U.S. forces on the French coast on 1 November 1917 until assuming command of all U.S. Naval Forces in France 15 January 1918 with USS Prometheus (Repair Ship No. 2) as his flagship.  Following WWI, Wilson became Commander-in-Chief, Atlantic Fleet with his former ship, Pennsylvania as his flagship.  From June 1921 until his retirement in 1925 he served as Superintendent of the Naval Academy.  Under his leadership, the USNA transitioned into the university that it is today.  The class of 1922, of which future Admiral Hyman Rickover was a member, showed particular appreciation for Wilson’s efforts to better prepare future generations of naval officers for their careers.  Admiral Wilson passed on 30 July 1954.

The USS Henry B. Wilson (DDG-7) is named in honor of Admiral Wilson.