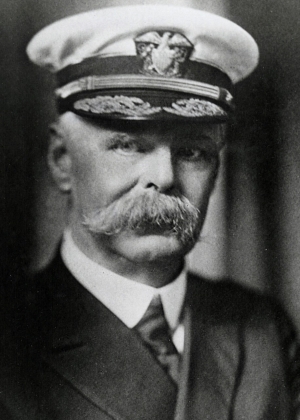 As Chief of Naval Operations, Admiral Hughes worked to strengthen the fleet with the design, construction, and deployment of aircraft carriers and cruisers.

Born in Bath, Maine, Charles F. Hughes graduated from the U.S. Naval Academy in 1884. He became an expert in deep-sea sounding and hydrography. During the Spanish American War he saw action with the Asiatic Squadron. In his first seagoing command, following the Titanic disaster, he led history’s first ice patrol. During World War I he commanded USS New York in operations with the Royal Navy’s Grand Fleet at Scapa Flow in the Orkney Islands. After the war, he commanded the Philadelphia Navy Yard and served as Commander 2nd Battleship Squadron and commander of Divisions 4 and 7 of the Battle Fleet. In 1923, he became President of the Naval War College, moving on to become the Director of Fleet Training a year later. In 1925, he became Commander in Chief, Battle Fleet. While Chief of Naval Operations, Admiral Hughes promoted and obtained authorization for light cruisers, the expansion of naval aviation, and the building of USS Ranger, the first vessel originally designed as an aircraft carrier. USS Charles F. Hughes (DD-428) and USS Admiral C. F. Hughes (AP-124) were commissioned in his honor.