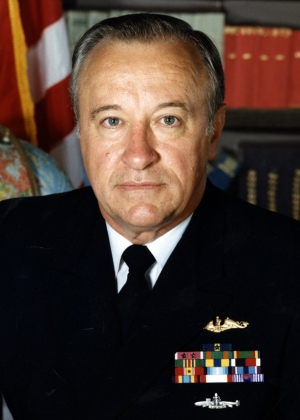 Admiral Carlisle A. H. Trost facilitated the transition of the U.S. Navy from a Cold War focus on sea control to a new emphasis on regional, littoral conflicts.

After graduating first in his class from the U.S. Naval Academy, Carlisle Trost joined the crew of a destroyer and then in 1956 a submarine, USS Sirago. He commanded the ballistic missile submarine USS Sam Rayburn and later Submarine Flotilla One/Submarine Group Five. As a junior officer he was awarded an Olmstead Scholarship, studying at the University of Freiburg, Germany. During the 1970s, Trost completed assignments as the naval aide to the secretary of the Navy, Assistant Chief of Naval Personnel, and Director Navy Program Planning. His operational experience included duty as Deputy Commander in Chief, U.S. Pacific Fleet, Commander U.S. Seventh Fleet, and Commander in Chief, U.S. Atlantic Fleet. Since Admiral Trost’s tenure as CNO coincided with the end of the Cold War, he prepared U.S. naval forces for new, post-Cold War missions. He confronted growing tensions in the Middle East resulting from the Iran-Iraq War. During 1987 and 1988, Trost ensured that the most capable American ships and aircraft were deployed to the Persian Gulf to protect oil tanker traffic from Iranian attack. In 1989 he provided critical support to SEAL and other naval forces operating to restore democracy in Panama.