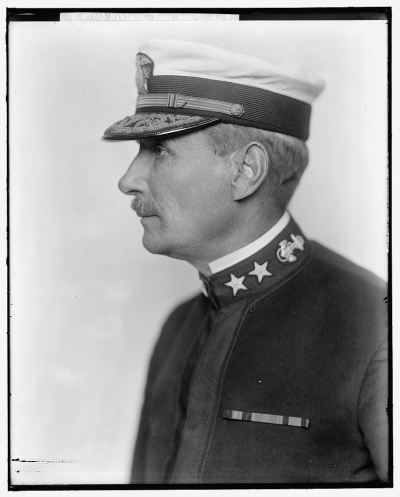 Vice Admiral Albert Parker Niblack graduated from the Naval Academy in 1880 and served in the United States Navy forty-seven years in many different capacities: explorer/scientist, Naval Attaché to various European and South American countries, sea commander, and as post-WWI Director of Naval Intelligence.  Niblack participated in the Spanish-American War, the Filipino Insurrection, the Boxer Rebellion, the Occupation of Vera Cruz, and World War I.  During World War I, Niblack commanded the Second Squadron, Patrol Force, Atlantic Fleet with USS Birmingham as his flagship.  Second Squadron was based out of Gibraltar.  Admiral Niblack was commended by Secretary of Navy Josephus Daniels for his direction of U.S. Forces out of Gibraltar and also received the Distinguished Service Medal.  Niblack served as Director of Navy Intelligence from 1919-1920 and became Commander, U.S. Naval Forces Europe in January 1921.  Niblack reached the statutory retirement age on 25 July 1923 and was transferred to the retired list with the rank of Vice Admiral.  In addition to a decorated career as a commander at sea, Niblack built a reputation as a renowned scientist and naval essayist.  He died 20 August 1929 in Monaco and was buried in Arlington National Cemetery.